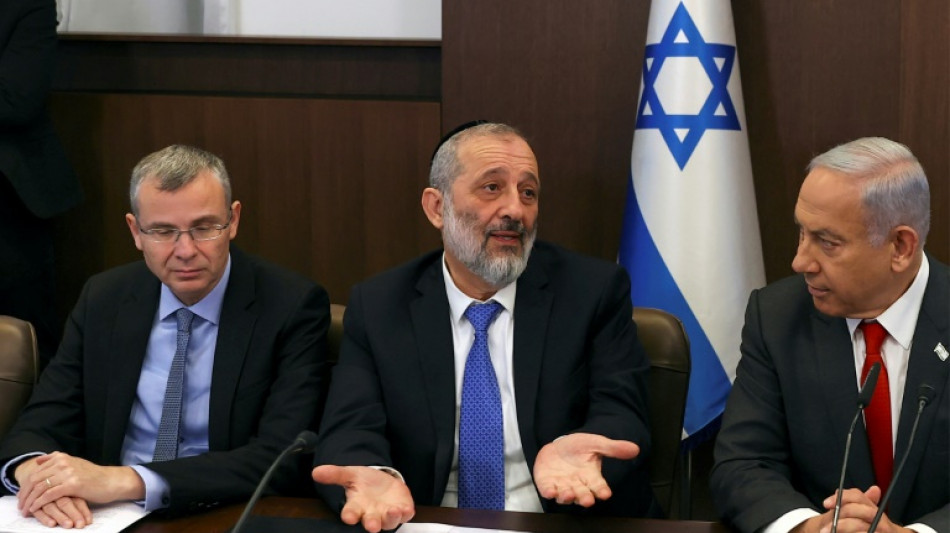 The premier appointed him health and interior minister last month, but on Wednesday the Supreme Court said Netanyahu "must remove Deri from his position" due to a recent tax evasion conviction.

"It is with a heavy heart, with great sorrow and with an extremely difficult feeling that I am forced to transfer you from your position as a minister," Netanyahu told Deri during a cabinet meeting, according to a statement from the premier's office.

Deri later said he would continue to promote the government's agenda and attend regular meetings of the leaders of coalition parties.

"No judicial decision will prevent me from serving (my voters)," he said in a statement.

Last year, Deri was fined 180,000 shekels ($50,000) and relinquished his parliamentary seat, but ran for office again in the November polls.

The judges said the veteran politician had made it appear as if he had intended to resign from politics to get a lighter sentence.

Lawmakers last month passed legislation allowing anyone convicted of offences but not given a custodial sentence to serve as a minister.

The judges ruled Deri's appointment "could not stand" since it was "extremely unreasonable", according to a summary of the court's decision.

Netanyahu said on Sunday the ruling, which permits Deri's Shas party to remain in government, "ignores the will of the people".

The premier added that he will endeavour to find any legal way for Deri to still "contribute to the State of Israel".

Netanyahu did not immediately detail the role Deri may play or who would take over the health and interior portfolios.

Deri had held several ministerial posts during his decades-long career, including after a seven-year ban following prison time for taking bribes.

He was sentenced in 2000 to three years, but the sentence was reduced by a third for good behaviour.

Netanyahu, already Israel's longest-serving prime minister, returned to office at the head of a coalition of ultra-Orthodox parties and an extreme-right alliance.

The prime minister himself is currently standing trial for bribery, fraud and breach of trust, charges he denies.

The government laid out in early January an ambitious agenda to overhaul the judiciary, which has sparked mass protest.

Tens of thousands of Israelis rallied in Tel Aviv on Saturday against the controversial plans, including handing more powers to lawmakers in appointing judges and overriding the top court's decisions.

In Israel, which does not have a constitution, the Supreme Court currently has the authority to repeal laws it considers discriminatory or unreasonable.

Netanyahu's predecessor Yair Lapid, who attended the demonstration, on Sunday slammed the current government as a "circus".

"The citizens of Israel should not have to pay the price of this government's corruption and disorder," he added.