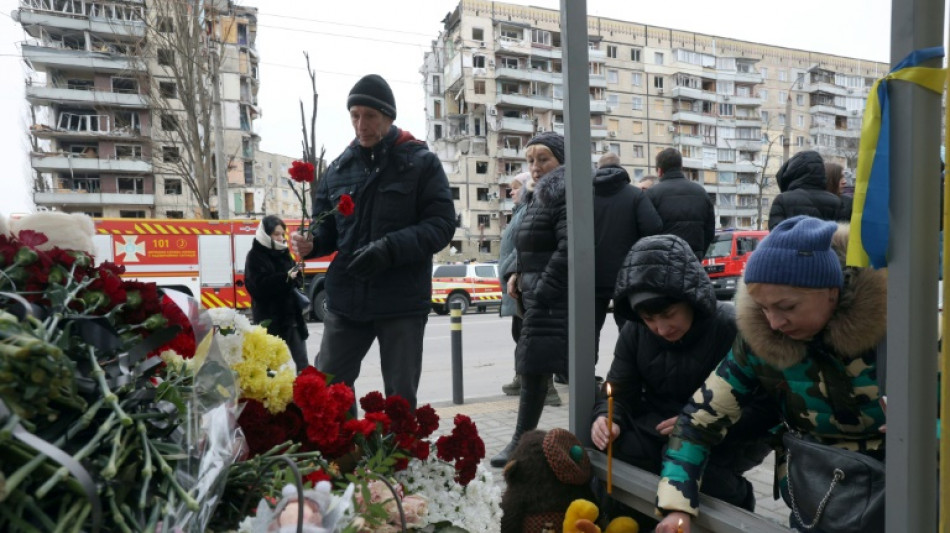 Maria Sherbak gently placed two roses on a growing mound of blooms and toys across the street from a building now synonymous with one of the most deadly single attacks in Ukraine since Russia invaded nearly a year ago.

A resident of the apartment complex who escaped unhurt, she joined the hundreds of people who on Sunday filed into the street to pay tribute to the at least 46 people who were killed.

They gathered as Orthodox priests led a memorial service and residents came to grips with the shattered sense of normalcy the city had settled into amid the war.

"Other parts of the city have been hit, which scared me, but I couldn't imagine that it would happen to my own home," Sherbak, 23, told AFP.

Men, women and children clutched flowers in bunches of even numbers, as is traditional at funerals in Ukraine, as they looked up at the gaping space left by a Russian missile, some crossing themselves or quietly crying.

Firemen, members of the teams first on the scene, stood vigil in a line in front of the shattered building, where they helped pull the living and the dead from the rubble.

At least 11 people are still missing, Dnipro Mayor Borys Filatov told AFP, but the search at the site has ended, with tests being carried out on recovered remains.

"I can't look at it without tears," said Dnipro resident Mykola, 28, who was visiting his brother in the neighbouring building just hours before the missile hit.

"It's war. There is no safe place," he said, holding his four-year-old daughter Milana, her face buried in his shoulder. "It needs to stop."

Three women, their eyes red, stood under a tree silently looking at the ruined building as a violinist played on the smoothed ground that was only nine days ago a mound of smoking rubble.

"We're all used to it now. We're used to living with the (air raid) sirens, the explosions, the blackouts," said Iryna Khytrikova. "One can get used to anything. But hardly anyone can get used to such losses."

Even so, as she struggles with the heightened fear of the strikes that threaten cities across Ukraine, she said, "maybe, eventually... we'll also get used to it".

For now, the building remains a stark reminder with the remnants of rent-open apartments exposing bathroom sinks and kitchen shelves. A broken foundation pillar stands like a monument to the dead, of whom six were children.

Broken glass blown out of windows still glints in the grass behind the tower block, some 100 metres (300 feet) from where the missile hit.

But some windows are already under repair, and the whirr of power tools floats down from the floors of the nine-story building.

In the coming days, the charitable organisation that has been offering warmth and food across the street will pack up its stalls and the rescue workers' tent will soon follow suit.

Residents whose apartments are still intact are gradually being reconnected to gas, electricity and water. Those whose homes were too badly damaged have found shelter elsewhere, the mayor said, some in apartments offered by people who have already left the city.

The strike made Sherbak think about leaving for good, but, she said, "Dnipro is home."