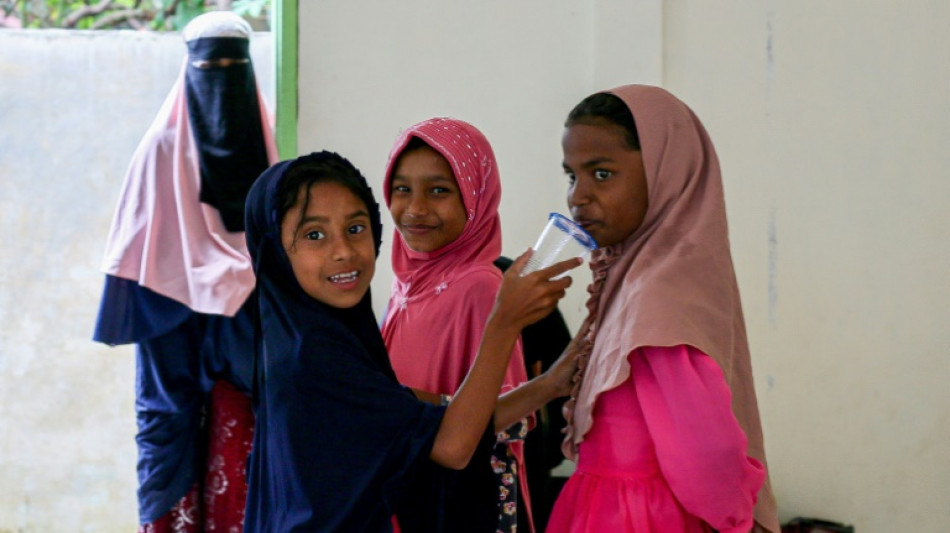 Rohingya boat with dozens of children lands in Indonesia's Aceh

A boat carrying more than one hundred Rohingya refugees, including dozens of children, landed on the coast of Indonesia's westernmost province Aceh early Sunday, police said.

The vessel, which sailed from a Rohingya camp in Bangladesh, arrived shortly after 3:00 am on a beach in Bireun district.

He said they would later be transferred to neighbouring Lhokseumawe district which has a shelter for refugees.

Police found out about the arrival after some local fishermen reported that a boat filled with Rohingya people had landed on the beach.

The boat appeared to be in good condition and the refugees had sufficient food and supplies during the journey.

"We are originally from Myanmar but we fled to Bangladesh and we started our journey from Bangladesh," one of the refugees, Omar Faruk, told an AFP journalist, adding that the group had been at sea for 25 days.

"We left Bangladesh because the Rohingya situation at the camp is not good, it's getting very bad at the moment," the 11-year-old said in English.

Faruk said he left his mother in Bangladesh and followed his uncle to start a new life, preferably in a Muslim majority country like Indonesia or Malaysia.

"We left Bangladesh to this country to make a beautiful future... I have no father, only one uncle and my mom is still in Bangladesh. I came here because I want to improve my education," he added.

It is the second arrival by the persecuted minority in Muslim-majority Indonesia in the recent months.

More than 100 Rohingya also arrived in Bireun in late December after drifting for days before the Indonesian government eventually allowed them to land and dragged their stricken boat to shore.

Hundreds of thousands of Rohingya Muslims have fled Buddhist-majority Myanmar since 2017 after a military crackdown that refugees said included mass killings and rape.

Most live in cramped camps in Bangladesh, where human traffickers run lucrative operations promising to find them sanctuary abroad.

Each year hundreds of Rohingya make perilous, months-long journeys from refugee camps in Bangladesh to Southeast Asia. Relatively affluent Malaysia is usually the favoured destination, but they also end up in Indonesia.