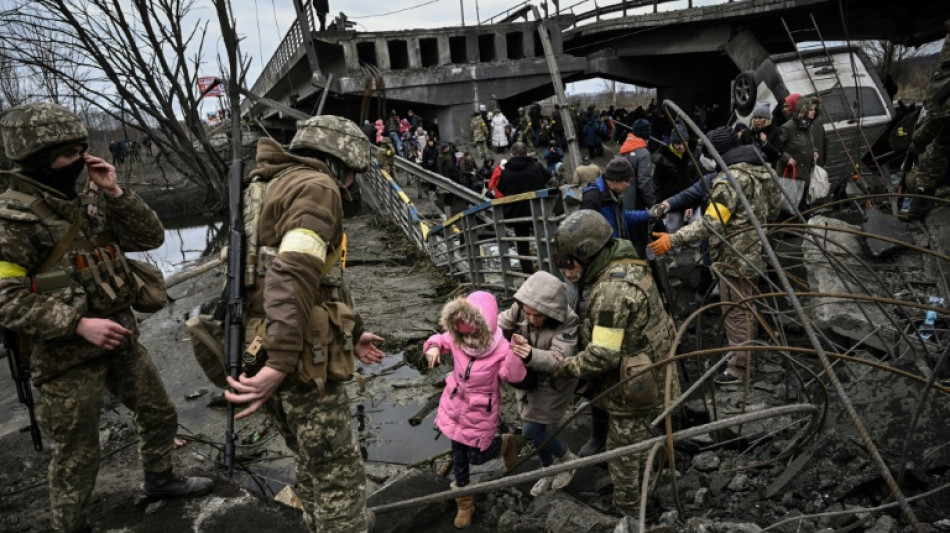 Ukraine and Russia made tentative progress in talks Monday but failed to reach a deal on creating "humanitarian corridors" from pummelled cities, as the bloodshed from Moscow's invasion mounted.

Kyiv said there had been "positive results" from the third round of negotiations, focused on giving civilians evacuation routes from besieged towns, but Russia said its expectations from the talks were "not fulfilled".

The comments dimmed hopes of a respite for terrified civilians who have been fleeing under a hail of shelling and mortar fire, with women and children among those who have been killed.

The bloodshed continued on day 12 of the war, with 13 people killed in shelling on an industrial bakery in the town of Makariv and the mayor of the town of Gostomel killed while delivering bread to civilians.

International sanctions intended to punish Moscow have done little to slow the invasion, and energy-hungry Western nations are still weighing up whether to ban Russian oil imports.

The conflict pushed oil prices to a near 14-year high, while gas prices also rocketed and stock markets around the world plunged over concerns about the effect on the global economy.

Ukraine had earlier rejected a Russian proposal for humanitarian corridors from the cities of Kharkiv, Kyiv, Mariupol and Sumy, as many of the routes led straight into Russia or its ally Belarus.

"This is not an acceptable option," Ukrainian Deputy Prime Minister Iryna Vereshchuk said.

French President Emmanuel Macron, who spoke to Russian president Vladimir Putin on Sunday, accused Putin of "moral and political cynicism" over the offer.

Outgunned Ukrainian forces have been trying to hold back Russian forces besieging cities as they push up from the east and south up in an attempt to encircle the capital Kyiv.

AFP journalists witnessed thousands of civilians on Monday fleeing the fighting via an unofficial humanitarian corridor in Irpin, a strategic suburb west of Kyiv.

A day earlier eight people died there in shelling, Ukrainian officials said. Images of the killing of one family of four shocked the world on Sunday.

"I am so happy to have managed to get out," said Olga, a 48-year-old woman leaving with her two dogs.

Children and the elderly were carried on carpets used as stretchers on the route, which leads over a makeshift bridge and then a single path secured by the army and volunteers.

Desperate people abandoned pushchairs and heavy suitcases to make sure they could get on the buses out of the war zone.

Two recent attempts to allow some 200,000 civilians to leave the besieged Azov Sea port of Mariupol have also ended in disaster.

Refugees trying to escape Mariupol using humanitarian corridors were left stranded as the road they were directed towards was mined, the ICRC said on Monday.

But Russia's lead negotiator Vladimir Medinsky said in televised remarks that "our expectations from negotiations were not fulfilled. We hope that next time we will be able to take a more significant step forward."

Ukraine's President Volodymyr Zelensky renewed calls for the West to boycott Russian exports, particularly oil, and to impose a no-fly zone to stop the carnage.

"How many more deaths and losses must it take to secure the skies over Ukraine?" he said in a video message.

Western allies have imposed unprecedented sanctions against businesses, banks and billionaires in a bid to choke the Russian economy and pressure Moscow to halt its assault.

Moscow has been forced to restrict sales of essential goods to limit black market speculation, while a stream of foreign companies halted business in Russia.

Iconic US jeans brand Levi's became the latest to join the exodus, but Japanese casualwear giant Uniqlo defended its decision to stay, saying: "Clothing is a necessity of life."

Calls to choke off Russia's war chest by embargoing oil imports however remain problematic for Western countries, despite the US saying it was in talks with Europe to ban them.

The leaders of Germany, Britain and the Netherlands warned on Monday against such a ban, however, saying it could put Europe's energy security at risk

NATO countries have pumped weapons into Ukraine but have so far rebuffed Ukraine's calls for a no-fly zone, with one prominent US senator, Marco Rubio, saying Sunday that it could lead to "World War III" against nuclear-armed Russia.

Putin has equated global sanctions with a declaration of war, put nuclear forces on alert and warned that Kyiv is "putting in question the future of Ukrainian statehood" by continuing to resist.

Putin has pledged the "neutralisation" of Ukraine "either through negotiation or through war", demanding that it be demilitarised.

Despite harsh punishments for those voicing dissent, protests in Russia against the Ukraine invasion have continued, with more than 10,000 people arrested since it began.

Protests have also taken place across Europe. The Russian embassy in Dublin on Monday condemned the ramming of its gates by a truck on Monday.

The invasion has triggered a wave of refugees -- mainly women and children -- into eastern European countries, with Poland taking the burden.

China said on Monday it was open to helping to mediate peace but stressed that the friendship between close allies Beijing and Moscow remained "rock solid".

The International Court of Justice meanwhile heard Ukraine's appeal for it to order Russia to halt the fighting, but Moscow declined to attend the sitting of the UN's top court, in The Hague.