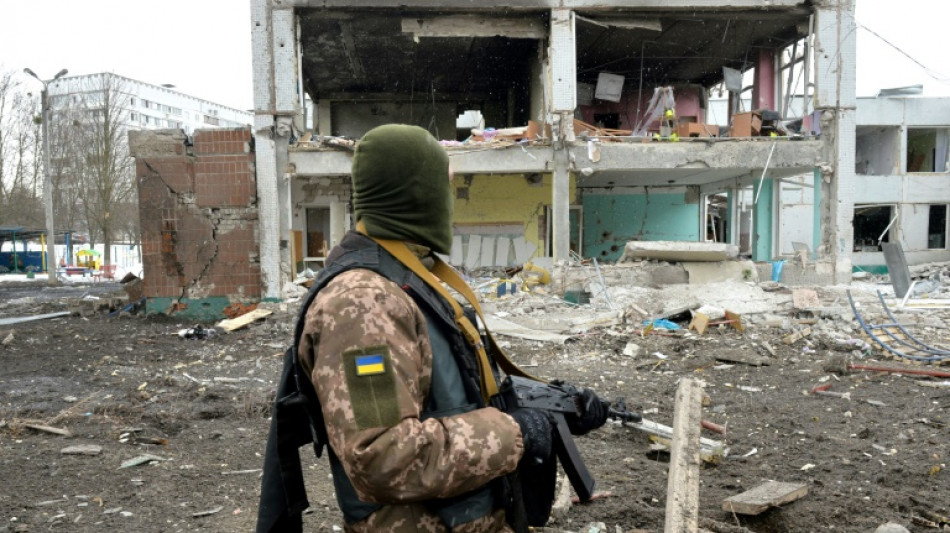 Russia and Ukraine agreed to open more humanitarian corridors on Wednesday to evacuate terrified civilians from bombarded cities as Moscow said some progress was being made in talks with Kyiv.

After air-raid sirens rang out again in Kyiv overnight, the plan was to open safe routes out of five Ukrainian areas including two suburbs of the capital that have been devastated by Russian shelling.

But previous ceasefire efforts have been bedevilled by violations, with Moscow apparently determined to push forward a 14-day-old invasion of its neighbour that has shocked the world.

Russia's war has sent around 2.2 million refugees across Ukraine's borders in what the UN has called Europe's fastest-growing refugee crisis since World War II, and sparked fears of wider conflict.

The West has responded with punishing sanctions, with the United States banning imports of Russian oil as it unleashed one of its biggest economic weapons against Moscow.

Major brands have continued to pull out of Russia, with McDonald's, Coca-Cola, Starbucks and Heineken among the latest to join the international chorus of outrage.

Russia insisted on Wednesday that Moscow's troops were not working to "overthrow" the Ukrainian government.

"Some progress has been made" in three rounds of negotiations with officials from Kyiv to resolve the conflict, Russian foreign ministry spokeswoman Maria Zakharova said during a press briefing.

Ukrainian Deputy Prime Minister Iryna Vereshchuk said Moscow vowed to respect the truce from 9:00 am to 9:00 pm around six areas that have been heavily hit by fighting.

Vereshchuk said Ukraine has had a "negative experience" of ceasefires not being respected, adding that residents had asked Russia to "keep its promises".

One of the evacuation routes is from Sumy, where some 5,000 civilians were able to escape on Tuesday, with some 60 buses able to leave the stricken town east of Kyiv near the Russian border, officials said.

For the first time the corridors also include Irpin, Bucha and Gostomel, a cluster of towns on the northwestern outskirts of Kyiv that have been largely occupied by Russian forces.

"I didn't want to leave, but there's nobody left in the homes around us, no water, no gas and no electricity," Larissa Prokopets, 43, told AFP on Tuesday.

The routes out of the city on Wednesday would lead to Kyiv, the regional administration said.

Ukraine has previously rejected some humanitarian corridors because they would lead fleeing civilians to Russia or its ally Belarus.

A corridor was also agreed for the port town of Mariupol, where several previous evacuations have failed, leaving thousands of people without water or power since Friday in what the International Committee of the Red Cross (ICRC) called "really apocalyptic".

Fighting raged in other areas, with at least 10 people killed in a Russian military attack on homes and other buildings in the eastern Ukrainian town of Severodonestk on Tuesday, a local official for the Lugansk region said in a statement on Telegram.

In a defiant speech to British lawmakers, Zelensky invoked Winston Churchill's resistance against Nazi Germany as he vowed to "fight to the end."

"We will fight in the forests, in the fields, on the shores, in the streets," he told the packed chamber, which gave him a standing ovation.

But Western governments have baulked at the idea of a no-fly zone to defend Ukraine's skies, fearing it would trigger a conflict with nuclear-armed Russia.

US Vice President Kamala Harris was travelling to Poland on Wednesday after the Pentagon rejected the "not tenable" Polish plan to deliver MiG-29 fighter jets to a US air base in Germany.

"The prospect of fighter jets... departing from a US/NATO base in Germany to fly into airspace that is contested with Russia over Ukraine raises serious concerns for the entire NATO alliance," spokesman John Kirby said.

The West has instead relied on funnelling weapons and aid into Ukraine, while aiming to bring Russia's economy to its knees through sanctions.

Ratings agency Fitch downgraded Russia deep into junk territory on Tuesday, predicting a default on its sovereign debt payments to be "imminent".

Britain said it would join the United States in phasing out Russian oil by the end of the year, and the European Union also said it would slash gas imports by two-thirds.

The EU on Wednesday agreed to add more Russian oligarchs, and to cut three Belarusian banks from the global SWIFT payments system over Minsk's support for the Kremlin's attack, France said.

"It is a hunk of metal at the bottom of the sea, I don't think it will ever be revived," Undersecretary of State for Political Affairs Victoria Nuland told US lawmakers.

A corporate boycott grew too, with Dutch brewery Heineken, the world's second-biggest beer company, saying it would stop selling and producing beer there.

Putin is using nuclear "blackmail" to keep the international community from interfering the conflict, the head of the Nobel prize-winning group ICAN told AFP Tuesday.