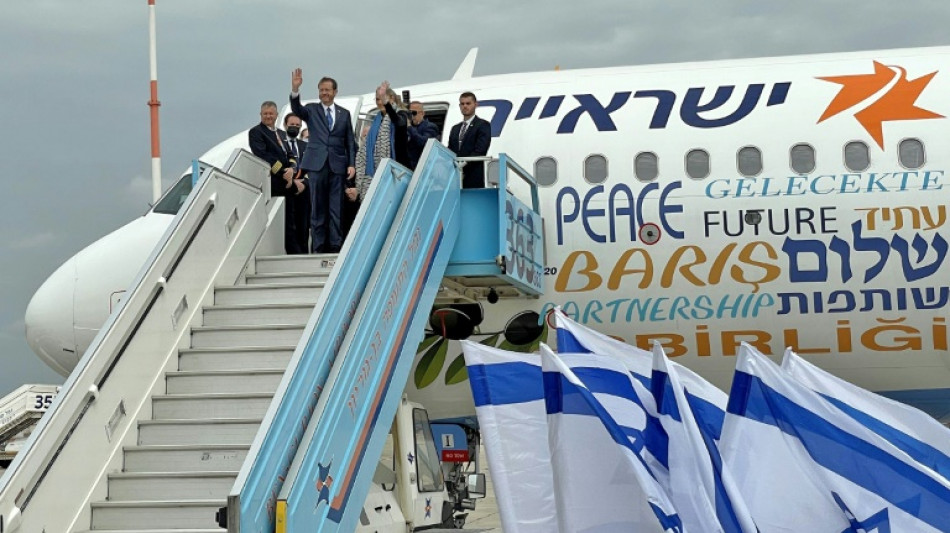 Israel's president flies to Turkey in bid to 'restart' ties

Israel's president left for Turkey Wednesday to meet his counterpart Recep Tayyip Erdogan, the first visit by an Israeli head of state since 2007, as the countries seek to mend fractured ties.

President Isaac Herzog's visit to Ankara and Istanbul was in the making weeks before Russia invaded Ukraine, but the conflict could feature at the talks, with both Israel and Turkey playing mediation roles in recent days.

But bilateral issues are likely to dominate following more than a decade of diplomatic rupture between the Jewish state and majority Muslim Turkey, a vocal supporter of the Palestinian cause.

"We will not agree on everything, and the relationship between Israel and Turkey has certainly known ups and downs and not-so-simple moments in recent years," Herzog said before departing.

"But we shall try to restart our relations and build them in a measured and cautious manner," he added.

Major issues on the agenda for the two-day trip will likely include gas sales to Europe, a topic that has acquired added urgency amid the Ukraine conflict.

Relations froze after the death of 10 civilians following an Israeli raid on the Turkish Mavi Marmara ship, part of a flotilla trying to breach a blockade by carrying aid into the Gaza Strip in 2010.

A 2016 reconciliation agreement that saw the return of ambassadors all but collapsed in 2018 in the wake of border clashes with Gaza, that saw dozens of Palestinians killed.

Turkey recalled its diplomats and ordered Israel's envoy out of the country.

In recent months, however, the countries have sought a rapprochement.

Israel's presidency is a largely ceremonial role, but Herzog, a veteran of the left-wing Labor party, has taken on an outsized diplomatic role. He has spoken to Erdogan several times since his inauguration in July.

But Erdogan's move to secure the release of an Israeli couple arrested in Istanbul in November on espionage charges proved a "turning point", said Gallia Lindenstrauss of Tel Aviv University's Institute for National Security Studies.

The matter "generated dialogue between the Israeli and Turkish side, and essentially opened the opportunity for improved relations", said Lindenstrauss, a senior researcher and Turkey expert.

The trio were part of the "East Mediterranean Gas Forum" established in 2019 with other states, including Egypt, Jordan and the Palestinian territories -- without Turkey.

In 2020, Israel, Greece and Cyprus signed the EastMed deal for a pipeline to ship gas from the eastern Mediterranean to Europe, triggering objections from Ankara.

The United States has since also raised concern about the project, citing possible issues over its "commercial viability".

For Turkey, that frustration over its exclusion from the gas talks -- as well as an internal economic crisis, and a more confrontational US administration since President Joe Biden's election -- has pushed Ankara closer to Israel, Lindenstrauss said.

And the US-brokered Abraham Accords, which saw Israel strike normalisation agreements with the United Arab Emirates and Bahrain, and re-establish ties with Morocco, have made it clear that this time Israel "is not the needy side of the equation" with Turkey, she told AFP.

Israeli officials have said that Herzog and Erdogan may discuss prospects of exporting Israeli gas to Europe through Turkey -- a notion raised by Erdogan in January -- amid fears of impaired supply following Russia's invasion of Ukraine.

Regional ties also remain sensitive, and Herzog visited both Greece and Cyprus ahead of his Turkey trip to reassure the two Israeli allies.

"Certainly, at a time when the international order is being shaken, it is good and proper that stability and partnership be maintained in our region, and I emphasised this point during my visits to Greece and Cyprus in recent weeks," Herzog said on the tarmac.

Herzog will also meet members of the Jewish community in Istanbul, before returning to Israel on Thursday.