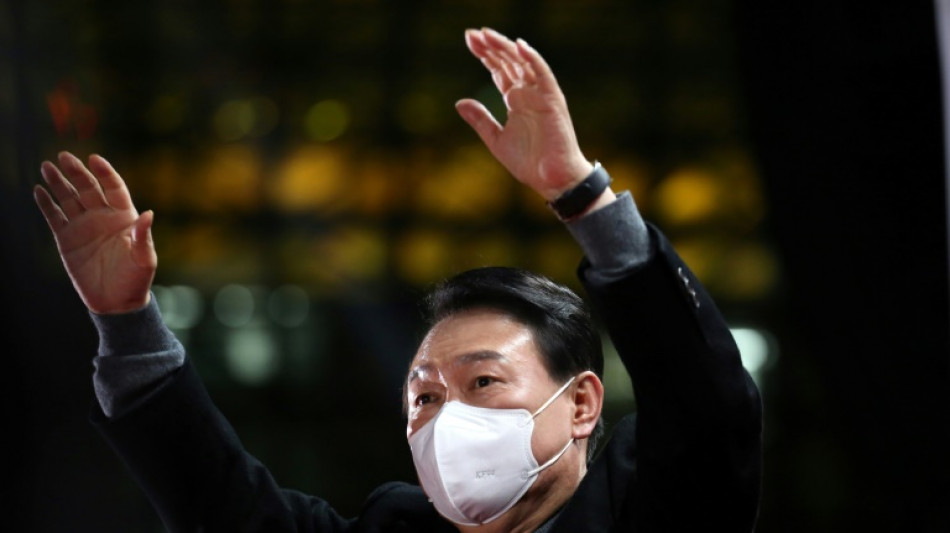 "This is a victory of the great South Korean people," Yoon told cheering supporters, who were chanting his name at the country's National Assembly.

Despite a campaign dominated by mud-slinging between frontrunners Yoon and Lee, voter turnout was 77.1 percent, including record early voting, with interest strong and the policy stakes high in the country of some 52 million.

It is also a dramatic victory for the opposition People Power party, who were left in disarray in 2017 after their president Park Gung-hye was impeached.

It could restart the "cycle of revenge" in South Korea's famously adversarial politics, analysts say, where presidents serve just a single term of five years and every living former leader has been jailed for corruption after leaving office.

But in his victory speech, he struck a more conciliatory tone, telling the country after a divisive race: "The competition is over now, and everyone must make joint efforts to become one."

The frontrunners, who were both so unpopular that local media branded it the "election of the unfavourables", have been neck and neck for months. Exit polls had shown the candidates separated by less than a percentage point.

Yoon has many "unknowns" which are difficult to account for, Karl Friedhoff of the Chicago Council on Global Affairs told AFP.

"His lack of experience on any real policy making is a serious concern," he said.

However, "he appears to be aggressive and ambitious, and he has consolidated support of a huge chunk of the country's elite," Vladimir Tikhonov, professor of Korean studies at the University of Oslo, told AFP.

Yoon will have to confront an increasingly assertive North Korea, which has embarked on a record-breaking blitz of weapons tests this year including a launch just days before the election.

He is more hawkish on Pyongyang and has threatened a pre-emptive strike if necessary.

Yoon's "advisers and legal lens on politics suggest he will support the US backed rules-based order in Asia," Leif-Eric Easley, a professor of international studies at Ewha Womans University in Seoul told AFP.

Young swing voters were a decisive factor in the race, analysts said, with the demographic's top concerns skyrocketing house prices in the capital Seoul, social inequality and stubborn youth unemployment.

Yoon has promised to build millions of new homes.

But he had also specifically courted disgruntled young male voters, with a promise to abolish the gender equality ministry, on the basis that South Korean women do not suffer from "systemic gender discrimination", despite evidence to the contrary.

Voters wore medical masks to cast their ballots, with the country recording a record 342,446 new Covid-19 cases on Wednesday amid a spike in the highly transmissible Omicron variant.

More than a million people were isolating at home after testing positive, health authorities said. The country amended its electoral laws last month to ensure they would be able to vote.

Early voting was also high, with a record-breaking 37 percent of the 44 million people eligible cast their ballots doing so last week -- the most since the system was introduced in 2013.

"What the country needs right now is change," 71-year-old Hong Sung-cheon told AFP at a polling station in southern Seoul.

Lee, meanwhile, a former child factory worker turned politician, had offered a slew of fresh policies ranging from a universal basic income to free school uniforms -- but his campaign was marred by scandal.

"I did my best but failed to live up to your expectations," he told supporters when he conceded defeat. "All responsibility lies with me. I extend my congratulations to candidate Yoon Suk-yeol."

Yoon will formally succeed Moon in May. The incumbent remains popular, despite not achieving a promised peace deal with North Korea.