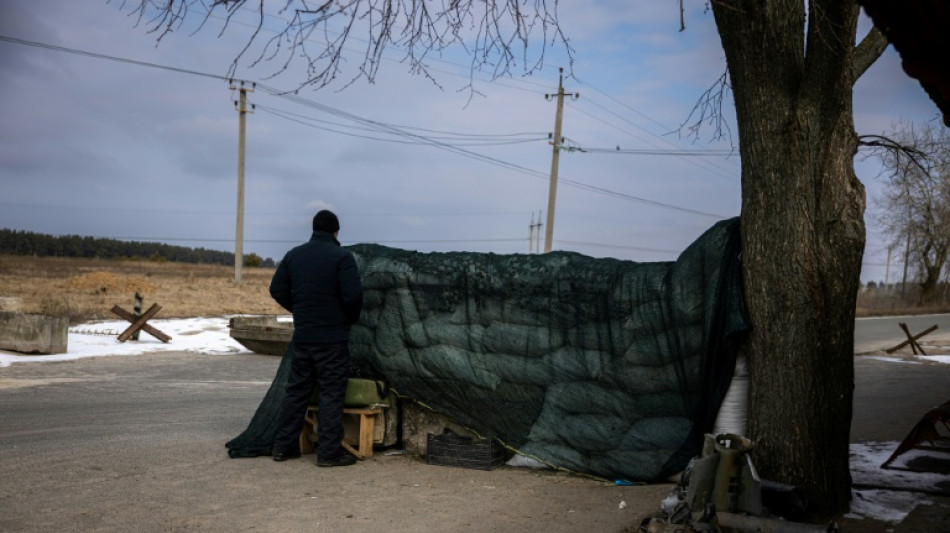 At a deserted service station on the motorway northeast of Kyiv, a Ukrainian officer warns: "Don't go any further. The Russians are over there."

Over the last five days, the Russians have advanced more than 80 kilometres (62 miles) on the northeastern front and are getting close to the Ukrainian capital.

The Ukrainian officer in camouflage points towards the north, where the motorway stretches empty to the horizon between snow-covered fields.

"The Russian tanks are just over there, two kilometres away," he said, ordering a civilian vehicle to turn round and go back, due to the danger from Russian forces.

"Drive in a zig-zag to avoid their shots," he advises the driver.

Then he returns to his watch, in charge of around a dozen soldiers whose task it is to pass on information on Russian tanks so that the Ukrainian army can bomb them as soon as they move to break through the lines.

The Russian tanks are stationed just a few kilometres away from Kyiv's city limits.

Last Saturday, the Russians were about 80 kilometres further up this road, on a level with the city of Chernihiv.

This advance along the motorway from the north brings Russian tanks just to the east of Kyiv, heightening fears that they could soon encircle the capital.

Russian tanks are also just a few kilometres from the city to its northwest.

In the surrounding villages, there are few cars on the road and they drive with utmost caution in what is now frontline territory.

On their rear windscreens, they fix handwritten signs saying simply: "Children", in the hope this will protect them from Russian bombardment, which has caused numerous civilian deaths since the start of the war.

In the nearest village, Velyka Dymerka, "most of the women and children have left, it's mainly the men left", says Oleg, 43, one of the civilian volunteers guarding the first checkpoint on the road leading to the village from the motorway.

Soon afterwards, on Tuesday afternoon, "the Russians bombarded us with Grad missiles and rockets", he says.

One of these crashed through a brick two-storey house standing among others in the village. Its owner, Petro Dvorskiy, had taken shelter in the cellar with his wife and they survived, his 45-year-old son Vadym tells AFP.

Almost 24 hours later, there is still white smoke billowing from the roof, now open to the elements.

Inside, the ceiling has fallen in and the water pipes are broken upstairs, so water drips down and laps around the living room furniture, surrounded by rubble and charred debris.

The Russians then tried to swoop on Velyka Dymerka, but the Ukrainian army prevented them by blowing up one of their tanks with a rocket-launcher, according to local volunteers, who show photos of the charred tank in the middle of the road.

For the moment, they do not mention any civilians killed by Russians in recent days, either under bombardment or in the villages taken over by Russian troops.

At the last checkpoint before Bohdanivka, the volunteer commander, Yuriy, a tall sturdy balding 49-year-old who was a dog trainer before the war, peers down the long straight road that separates him from the enemy.

"It's calm now, but it was hot yesterday," he comments. At the foot of the checkpoint is a pile of twisted metal tubes.

He says that the column of Russian hardware that took Bohdanivka was made up of more than 70 vehicles including some 40 tanks and had around 300 soldiers.

He says that "the Russians come to the villages, shoot at the houses to scare the inhabitants and steal everything they can as supplies".

"They park their vehicles beside the houses, alongside the inhabitants, so that they won't get bombarded," he adds.

Before taking his leave, he asks to pass on a message: "The West needs to help Ukraine."

On Wednesday there are few soldiers at Velyka Dymerka and the volunteers say that they are training villagers to use rocket launchers.

Two weeks after the conflict began, there are numerous unknown factors: how much resistance the Ukrainians will put up and whether Russia has the capacity to encircle and take Kyiv.

A few kilometres closer to Kyiv, close to Brovary, a suburb that is Kyiv's eastern gateway, Vladyslav, a 22-year-old Ukrainian soldier, says he believes the Russians "lack food and fuel", "are on their knees" and will end up "bombarded and demoralised".

But Sulim, the battalion's deputy commander, who is 40 and more experienced, says he thinks the Russians will "keep moving forward".

He would like to see some senior Russian officers change their minds, but says he has little hope of this happening.