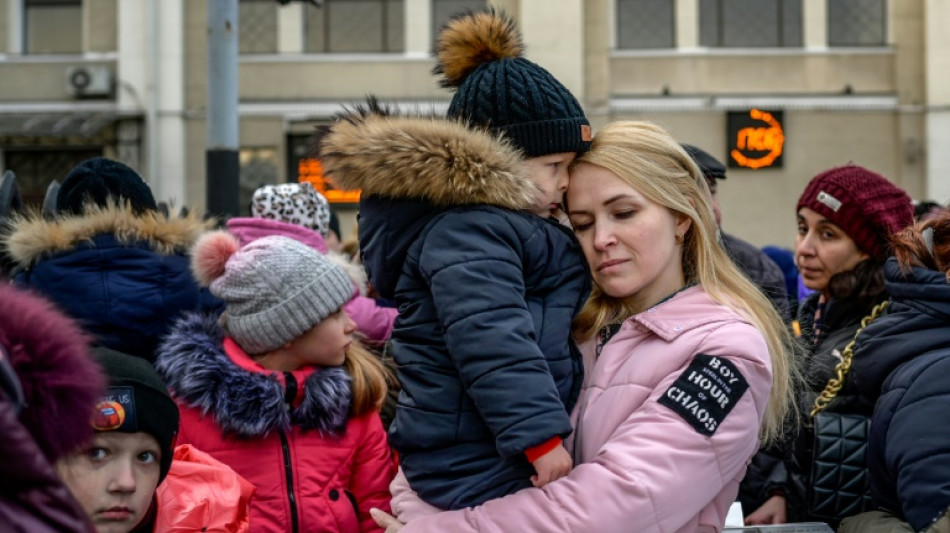 The strike came as Mariupol's mayor said more than 1,200 civilians had died in the nine-day Russian siege of the southern port of almost half a million, with people left cowering without power or water under a barrage of shelling.

A local official said the strike on the recently refurbished maternity hospital, which included a paediatric unit, wounded at least 17 staff, though no deaths were reported.

On the Russian side, the foreign ministry -- while it did not deny the attack -- accused Ukrainian "nationalist battalions" of using the hospital to set up firing positions after moving out staff and patients.

But international condemnation was swift, with the White House slamming the "barbaric" use of force against civilians, while British Prime Minister Boris Johnson called the attack "depraved".

A UN spokesman said no health facility "should ever be a target".

The attack came as women were in labour inside, the regional military administration in Donetsk told AFP.

Videos posted by the regional chief and city authorities showed a woman being evacuated on a stretcher, a huge crater in the hospital yard, branches snapped from trees and burning cars, and cladding ripped from the building's facade.

The strike in Mariupol took place 14 days after Russian forces entered Ukraine in defiance of the international community -- and on the eve of the highest-level talks to date between the two nations.

Russian Foreign Minister Sergei Lavrov landed in Turkey for the face-to-face talks set for Thursday with his Ukrainian counterpart Dmytro Kuleba -- who warned in a Facebook video his expectations were "limited".

So far, the parties have been engaged in lower level talks in Belarus, involving top Ukrainian officials but no Russian ministers and largely devoted to humanitarian issues.

On that front, the past days have brought some relief to terrified civilians with the opening of evacuation corridors out of bombarded cities, and Russia and Ukraine agreeing Wednesday to open several more.

For the first time the safe routes included Irpin, Bucha and Gostomel, a cluster of towns on the northwestern outskirts of Kyiv that have been largely occupied by Russian forces.

A corridor was also agreed for besieged Mariupol, where several previous evacuations have failed.

While Moscow vowed to respect a 12-hour truce to allow civilians to flee via those corridors, its forces have made rapid advances towards the capital, approaching Brovary, a large eastern suburb, AFP journalists saw.

"They shoot to scare people and force them to stay at home, steal what they can to get supplies and settle among the inhabitants, so that the Ukrainian forces do not bomb them," said Volodymyr, a 41-year-old resident of Velyka Dymerka, 15 kilometres (nine miles) from Brovary.

Russia's war has sent around 2.2 million refugees across Ukraine's borders in what the United Nations has called Europe's fastest-growing refugee crisis since World War II, and sparked fears of wider conflict pulling in the NATO alliance.

Fears of a potential nuclear accident also spiked Wednesday for the second time in a week -- after Russia attacked and seized a giant power station at Zaporizhzhia -- as Ukraine said power had been cut to the Chernobyl nuclear plant.

But the UN's atomic watchdog said that while the development violated a "key safety pillar", it saw "no critical impact on safety" at Chernobyl, site of the world's worst nuclear disaster in 1986.

- Missile defense, but no jets -

Reflecting fear that a Russian missile could -- deliberately or not -- cross the border from Ukraine into Poland, the United States said Wednesday it was sending two new anti-aircraft batteries to the NATO member state.

But it also definitively rejected a Polish offer to transfer fighter jets to Ukraine via a US air base in Germany, saying the "high risk" move could have been interpreted as an escalation.

Zelensky has appealed repeatedly -- and did so again Wednesday -- for Western powers to find a way to provide it with Poland's Soviet-era MiG-29 fighter jets, which Ukrainian pilots already know how to fly.

But while the United States and European allies have supplied an arsenal of anti-tank and anti-aircraft missiles to Kyiv, both have drawn the line at jets, for fear of being considered co-belligerents by Russia.

"We do not support the transfer of additional fighter aircraft to the Ukrainian Air Force at this time, and therefore have no desire to see them in our custody, either," Pentagon spokesman John Kirby told reporters, firmly shutting down Poland's proposed scheme.

In the same logic, Western governments have baulked at Zelensky's increasingly desperate appeal for a no-fly zone to be declared over Ukraine, fearing it would trigger a conflict with nuclear-armed Russia.

In tandem with military assistance to Kiev, Western allies have sought to choke the Russian war effort with unprecedented sanctions -- including a US ban announced Tuesday on the oil imports that help bankroll the conflict.

But political leaders are also keenly aware of the lasting impact of the energy standoff over Ukraine, with French Economy Minister Bruno Le Maire warning the current spike in energy prices will produce effects comparable to the 1973 oil shock.

The European Union agreed in the meantime to add more Russian oligarchs to a sanctions blacklist, and to cut three Belarusian banks from the global SWIFT payments system over Minsk's support for the Kremlin's attack.

The Kremlin, scrambling to limit the economic fallout, accused the United States of having "declared economic war on Russia".