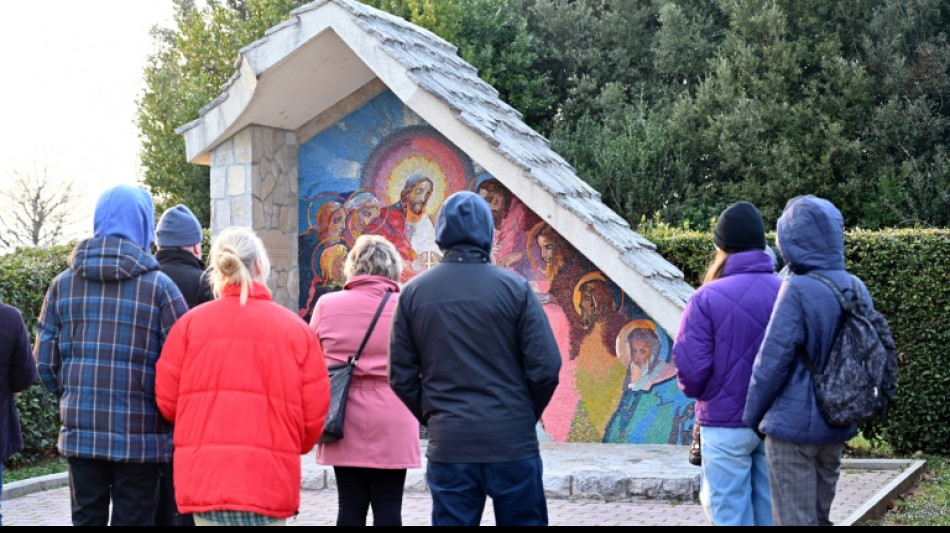 'We understand': Refugees pray for Ukraine at Bosnian pilgrimage site

Far from home, Mariana Sova could only pray for Ukraine and an end to the war from a Catholic pilgrimage site in southern Bosnia where she had found safe haven from the fighting.

"I pray for my country because Russia is killing people there," said Sova, whose husband had stayed behind in Ukraine to help with the war effort. "I want this to stop."

Sova fled her home in western Ukraine's Ivano-Frankivsk after Russian missiles targeted a nearby airport.

Thousands of Ukrainian pilgrims visit the small Bosnian town of Medjugorje every year.

This time, however, following Russia's invasion of Ukraine last month, Sova and around 150 other Ukrainian women and children will be staying at the holy site in Bosnia for the foreseeable future.

The arrival of refugees in Bosnia marks a stark reversal for the once war-torn country, where a brutal conflict in the 1990s during the bloody breakup of Yugoslavia forced around two million from their homes.

In the decades since the war's end, hundreds of thousands more have left Bosnia to escape economic stagnation and political dysfunction in the Balkan state.

But with conflict again erupting across Europe, Bosnians are preparing to open their doors to Ukraine's refugees.

"Several of us managed to accommodate a total of 150 people so far," said Davor Ljubic, who heads Medjugorje's hotelier association.

Ljubic said they were expecting the arrival of three or four more buses with some 200 people in the coming days.

"We went through something similar some 30 years ago and we understand how these people feel," said the owner of one home where 12 Ukrainians were staying.

Ukrainians are being welcomed "with a big heart and they can stay as long as they want," the man added, who requested anonymity. "As long as I have bread, they will have bread too."

Medjugorje, once a poor town near the border with Croatia, has prospered thanks to a constant stream of pilgrims to the area after the Virgin Mary was said to have appeared before six teenagers in 1981.

More than two million people have fled Ukraine since Russia launched its full-scale invasion of the former Soviet republic, the United Nations reported this week. They have described it as the fastest-growing refugee crisis since World War II.

"Behind the monolithic statistics are two million stories of separation, anguish, and loss," said Filippo Grandi, the chief of the UN's refugee agency.

The Bosnian government said they were making preparations to welcome more refugees at two separate locations in the country that would be able to accomodate around 500 people.

But even as tens of thousands flee Ukraine every day, others are planning to return to help evacuate more people.

Vitali -- a driver for a Ukrainian travel agency that offered regular trips to Medjugorje -- said he would return there soon. His family there is sheltering over a dozen people who fled shelling in the eastern city of Kharkiv.

But for others, their old homes will remain far away until the war ends.

"We dream of returning home and resuming our lives and work," said Sova.