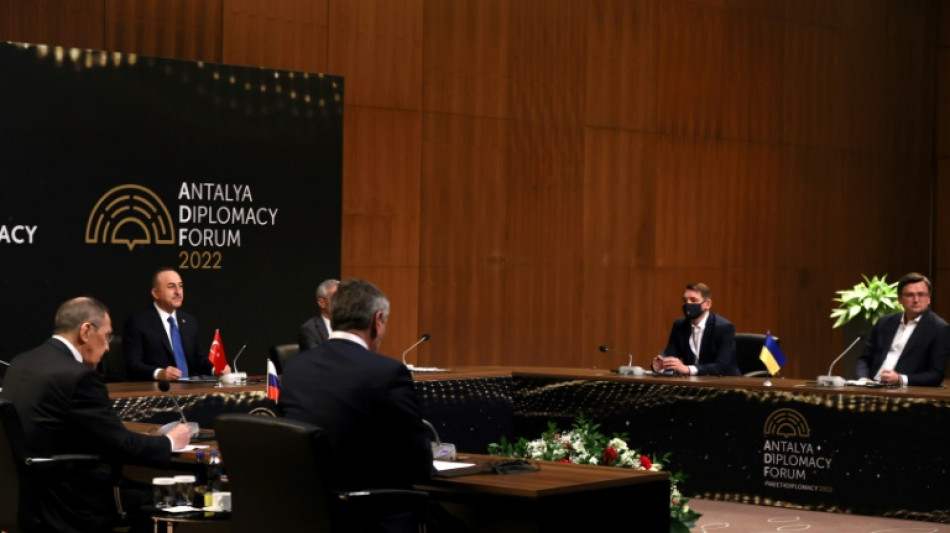 Russian Foreign Minister Sergei Lavrov and Ukrainian counterpart Dmytro Kuleba on Thursday were holding talks in Turkey in the first such high-level contact since Moscow invaded its neighbour.

Turkey has for weeks pushed to play a mediation role in the conflict. But analysts fear there are only the lowest chances of a breakthrough at the meeting.

The ministers began talks on the sidelines of a diplomatic forum in the southern Turkish resort of Antalya, joined by Turkish Foreign Minister Mevlut Cavusoglu, a Turkish official told AFP in comments confirmed by the Russian and Ukrainian foreign ministries.

Images of the meeting showed the Russian, Turkish and Ukrainian delegations sitting on each side of a 'U' shaped table, with each minister accompanied by just two other officials.

Kuleba said in a video on Wednesday that his expectations were "limited" for the talks and said their success would depend on "what instructions and directives Lavrov is under" from the Kremlin.

Both ministers were due to make separate statements to the press after the talks. There was no indication that they had shaken hands ahead of the discussions.

The meeting is taking place against the background of international outrage after an attack on a children's hospital in the besieged Ukrainian city of Mariupol which, according to Kyiv, killed at least three people, including a young girl.

The Turkey talks are one of a number of diplomatic initiatives underway.

Israel is seeking to broker a solution through direct talks with President Vladimir Putin and French President Emmanuel Macron is also frequently phoning the Kremlin chief.

"There is today a very slim hope and we need to seize it... without being naive," France's Europe Minister Clement Beaune told France Inter radio.

"The goal is the same that the fighting stops but we need to put great pressure on Russia," he added.

Turkey is a traditional ally of Ukraine and has supplied the country with Bayraktar drones -- made by a firm whose technology director is Erdogan's own son-in-law -- which Kyiv has deployed in the conflict.

But it is seeking to maintain good relations with Russia, on which Turkey depends heavily for gas imports and tourism revenues.

"We are working to stop this crisis transforming into a tragedy," President Recep Tayyip Erdogan said on Wednesday.

"I hope the meeting between the ministers will open the way to a permanent ceasefire."

Erdogan is scheduled to talk on the phone with US President Joe Biden Thursday at 1530 GMT, according to the Turkish presidency.