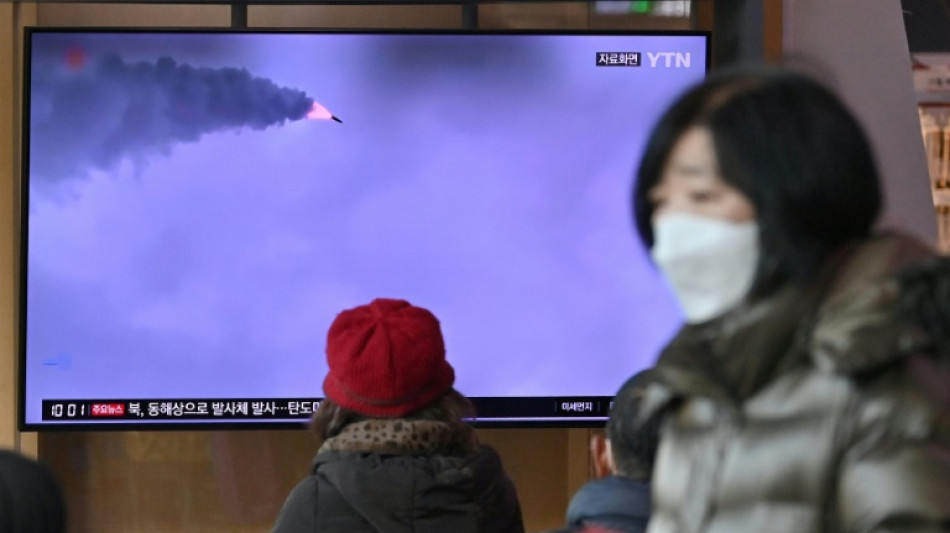 North Korea's Kim Jong Un called for the "expansion" of a key satellite station, state media said Friday, as the US threatened fresh sanctions over two recent missile tests it said were "disguised" as a space launch.

According to North Korea, the February 27 and March 5 tests were focused on developing a reconnaissance satellite.

But the Pentagon said Thursday that rigorous analysis concluded they were of a new intercontinental ballistic missile (ICBM) system.

Analysts say that North Korea uses ostensibly peaceful satellite development as a fig leaf for full-range ICBM development as there is significant overlap in technology.

Fuelling speculation of an imminent ICBM test, KCNA reported Friday that Kim had visited the Sohae Satellite Launching Ground and called for it to be "modernised" and expanded "to enable large carrier rockets to be launched there".

Dubbed a "monster missile", the Hwasong-17 is likely designed to carry multiple warheads and has never been test-fired.

While neither of the two recent launches displayed ICBM range or capability, they were clearly intended "to evaluate this new system before conducting a test at full range in the future, potentially disguised as a space launch", Kirby said.

South Korea and Japan both confirmed the US assessment.

North Korea will mark the 110th anniversary of the birth of founder Kim Il Sung on April 15, and analysts predict Pyongyang will conduct an ICBM or satellite launch as part of the celebrations.

Any such launch would mark the end of Pyongyang's self-imposed moratorium since 2017 and send military tensions soaring on the Korean peninsula and beyond.

The North has carried out three ICBM tests, the last in November 2017 of a Hwasong-15 -- deemed powerful enough to reach the continental United States.

Before its ICBM tests in 2017, the North had carried out a series of powerful rocket launches that it insisted were part of a civilian space program.

Those launches were made from the Sohae Satellite Launching Station on the northwest coast -- the site of Kim's recent visit.

Both a military reconnaissance satellite and a long-range ICBM that can carry warheads are top of North Korea's laundry list of strategic weapons set out by leader Kim last year.

North Korea is already under biting international sanctions over its missile and nuclear weapons program.

But a senior US official said that the latest tests were a "serious escalation" and the Treasury would announce fresh measures on Friday to help prevent Pyongyang accessing "foreign items and technology" to advance that program.

Such measures underline that the North's "unlawful and destabilizing activities have consequences" and that diplomatic negotiations are the only viable path forward for Pyongyang, the official said, speaking on condition of anonymity.

Kirby said Washington "remains committed to a diplomatic approach" but "will take all necessary measures to ensure the security of the United States and our allies."

When the new ICBM was unveiled at the 2020 parade, military analysts said it appeared to be the largest road-mobile, liquid-fueled missile anywhere in the world -- and likely designed to carry multiple warheads in independent re-entry vehicles (MIRVs).

North Korea watchers regularly caution that the devices Pyongyang puts on show at its parades may be mock-ups or models, and there is no proof they work until they are tested.

Pyongyang has been abiding by its moratorium on testing ICBMs and nuclear weapons since Kim embarked on a flurry of high-profile diplomatic engagement with then US president Donald Trump in 2017.

Talks later collapsed and diplomacy has languished since, despite efforts by US President Joe Biden to offer fresh negotiations.

The North started hinting in January that it might lift the moratorium, and has conducted nine weapons tests this year, including of banned hypersonic and medium-range ballistic missiles.

A fresh ICBM launch would be an early challenge for South Korea's new president-elect, Yoon Suk-yeol, who has vowed to take a hard line with the North's provocations.

Yoon has not ruled out the possibility of dialogue with Pyongyang, but analysts say his hawkish position significantly reduces the prospect of substantive engagement.