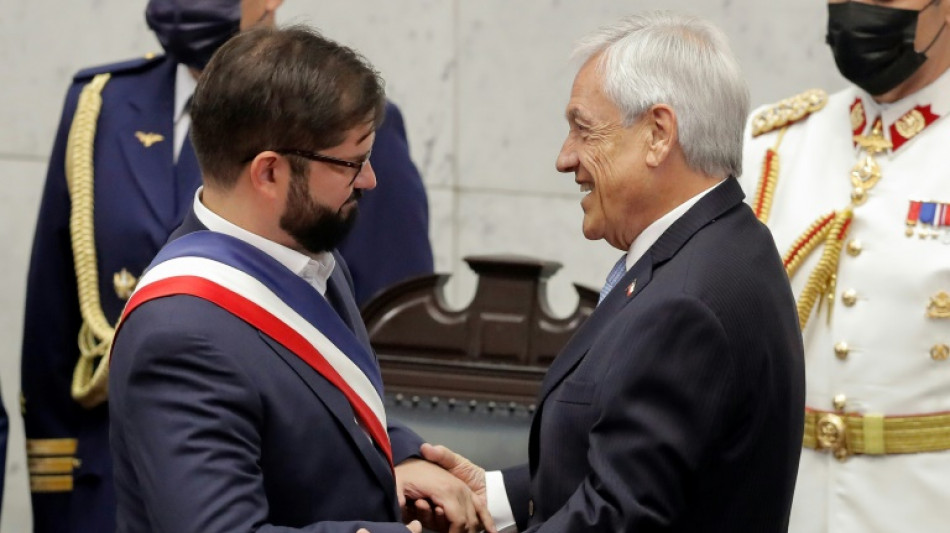 Leftist former student leader Gabriel Boric was sworn in Friday as Chile's youngest-ever president, with plans to turn the country that was a neoliberal laboratory for decades into a greener, more egalitarian "welfare state."

Aged 36, Boric takes over the reins of a country clamoring for change following mass protests in 2019, which he supported, against deep-rooted inequality in income, healthcare, education and pensions.

The revolt, which left dozens dead and hundreds injured, was the catalyst for a process now under way to rewrite Chile's dictatorship-era constitution.

Boric has vowed to relegate "to the grave" Chile's neoliberal economic model, which dates from the era of military despot Augusto Pinochet and is widely seen as sidelining the poor and working classes.

One percent of Chile's population owns about a quarter of its wealth.

Despite concern over his Frente Amplio (Broad Front)'s political alliance with the Communist Party in a country that traditionally votes for the center, Boric won a surprise runaway election victory last December.

He succeeded in mobilizing women and the youth, with a record voter turnout giving him nearly 56 percent of the vote to beat far-right Pinochet apologist Jose Antonio Kast.

The men, polar opposite political outsiders, had polled neck-and-neck ahead of the vote.

As the stock exchange dropped on news of Boric's victory, he vowed in his first official address to "expand social rights" in Chile, but to do so with "fiscal responsibility."

Boric took the oath Friday in Valparaiso, the seat of Congress, in a suit but no tie, appearing to holding back tears of emotion as he received the presidential sash from his predecessor Sebastian Pinera.

A lawmaker since 2014, millennial Boric inherits an economy ravaged by the coronavirus outbreak.

Much of 2021's GDP growth was fueled by temporary pandemic grants and stop-gap withdrawals allowed from private pension funds.

The central bank has been hiking interest rates to curb inflation.

Boric has promised to introduce a European-style social democracy to Chile, boosting taxes to pay for social reform, and all while putting the brakes on spiralling debt.

He will tackle these challenges with a cabinet comprised mainly of women and young people -- their average age is 42.

The team includes two comrades with whom Boric, as a student, had led countrywide protests in 2011 for free, quality education.

Six cabinet members were born, lived or studied in exile during the Pinochet years.

Analysts say Boric's daunting task will be further complicated by a Congress just about equally split between left- and right-wing parties.

This means that much negotiation and compromise will be required to pass laws to bring his plans to fruition.

"This is a government that comes to power in a very fragmented political climate, which does not have a parliamentary majority and therefore cannot make very radical reforms in the short term," political analyst Claudia Heiss of the University of Chile told AFP.

The new president's Broad Front party has never been in government.

Pinera who completes his term with a disapproval rating of 71 percent, the worst recorded by a president since the return of democracy in 1990.

More than 20 international guests were confirmed to attend the investiture ceremony, including Alberto Fernandez and Pedro Castillo -- the presidents of neighboring Argentina and Peru -- King Felipe VI of Spain, and famed Chilean author Isabel Allende.

Also in the audience was university student Gustavo Gatica, injured by rubber bullets in both eyes during the 2019 protests.