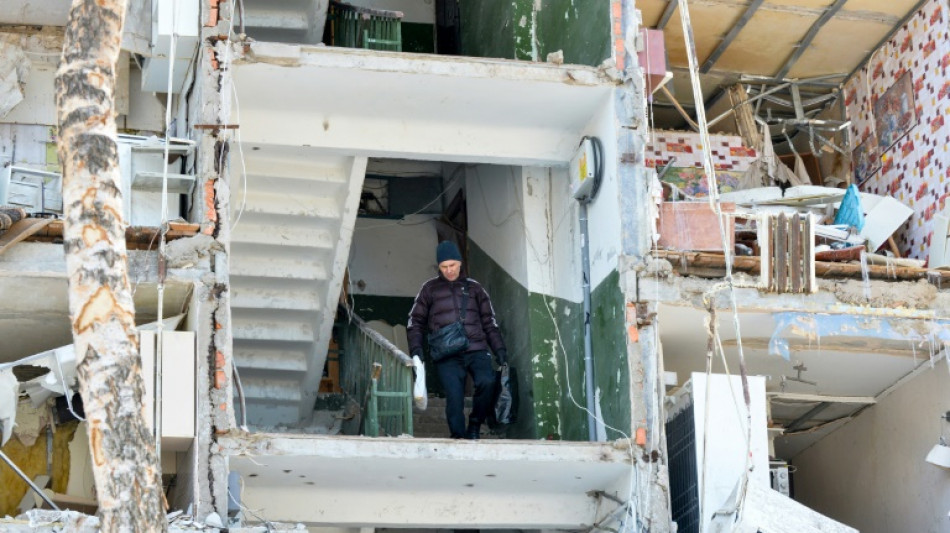 Russia and Ukraine launched a fresh round of talks on Monday in an effort to end Moscow's devastating war, despite deadly air strikes in the capital Kyiv and an eastern pro-Moscow separatist region.

As the fourth round of talks to end more than two weeks of fighting began, Russian-backed separatists said fragments from a shot-down Ukrainian Tochka missile landed in the centre of Donetsk, killing 17 civilians, including children.

Ukraine said it would demand "peace, an immediate ceasefire and the withdrawal of Russian troops" during the talks.

"Only after this can we talk about regional relations and about political differences," Kyiv's lead negotiator Mikhailo Podolyak said in a video statement posted to Twitter.

A Russian air strike on a residential building in the Ukrainian capital earlier killed at least one person and injured a dozen, the country's emergency service said.

Another person was killed when an Antonov aircraft factory in Kyiv and a nearby residential building were targeted by Russian shelling, city officials said.

Russian troops, which invaded Ukraine on February 24, edged closer to the city and kept up their siege of the southern port city of Mariupol, where officials said nearly 2,200 people have been killed.

The United Nations estimates almost 2.7 million people have fled Ukraine since the invasion, most of them to Poland as neighbouring countries struggle to provide for the arrivals.

"Nowhere is safe anymore," said Yilena, 38, displaced to the Ukrainian city of Dnipro, considered a safe heaven for people fleeing heavy fighting in cities like Kharkiv.

In Dnipro, the whirring of air raid sirens that lasted for five hours -- the longest since the war began -- leaving many in the city fearful for what could lie ahead.

Ukrainian and Russian representatives were meeting via videoconference on Monday, a Ukrainian presidential adviser and a Kremlin spokesman both said before the latest strike.

"Our goal is that in this struggle, in this difficult negotiating work, Ukraine will get the necessary result... for peace and for security," President Volodymyr Zelensky said.

Talks between Kyiv and Moscow have yet to yield a ceasefire and Russian forces have shown no sign of easing their onslaught.

The aim was "to do everything to ensure a meeting of presidents. A meeting that I am sure people are waiting for," said Zelensky.

In an attack dangerously close to NATO member Poland, Russian air strikes on a Ukrainian military training ground near the border killed at least 35 people and wounded more than 130 on Sunday.

Zelensky has urged NATO to impose a no-fly zone, but the United States has ruled out any direct intervention, with President Joe Biden warning that NATO fighting Russia "is World War III".

"If you do not close our sky, it is only a matter of time before Russian missiles fall on your territory, on NATO territory, on the homes of NATO citizens," Zelensky repeated on Monday.

Washington and its EU allies have sent funds and military aid to Ukraine and imposed unprecedented economic sanctions on Russia.

As Moscow felt the bite of international sanctions, Russia's finance ministry accused foreign countries of wanting to force Russia into an "artificial default" and said it would meet its debt obligations.

In a sign Moscow may have underestimated the challenge it would face, US officials told media that Russia had asked China for military and economic aid for the war.

US diplomat Richard Haass, president of the Council on Foreign Relations, said Russian President Vladimir Putin reportedly asking for military help could be a "defining moment" for China's Xi Jinping.

Beijing later accused Washington of spreading lies over China's role in the Ukraine war, without directly addressing the US media reports.

The latest fighting in Kyiv's suburbs left a US journalist dead -- the first foreign reporter killed in Ukraine since Russia's invasion began on February 24.

Meanwhile, efforts continued to get help to the devastated southern city of Mariupol, which aid agencies say is facing a humanitarian catastrophe.

A humanitarian column headed there had to turn back again on Sunday, a city official told AFP, after the Russians "did not stop firing." It is expected to try again on Monday.

A total of 2,187 residents have now died in days of relentless Russian bombardment, the city council said Sunday.

Zelensky has accused Moscow of both blocking and attacking humanitarian convoys, although he said Sunday that another 125,000 people had been evacuated that way across Ukraine.

Russia's forces had earlier focused on eastern and southern areas of Ukraine -- home to more ethnic Russians -- but in recent days have moved to the country's centre.

In Kyiv, only the roads to the south remain open, according to the Ukrainian presidency. City authorities have set up checkpoints, and people are stockpiling food and medicine.

The north-western suburb of Bucha is entirely held by Russian forces, along with parts of Irpin, Ukrainian soldiers told AFP. Some blocks in the once well-to-do suburb have been reduced to rubble.

The Russians are encountering resistance from the Ukrainian army to both the east and west of the capital, according to AFP journalists on the scene.

About 1,300 Ukrainian troops have been killed, according to Kyiv.

And in Russia, Instagram was no longer accessible Monday after Moscow accused its parent company Meta of allowing calls for violence against Russians on its platforms.