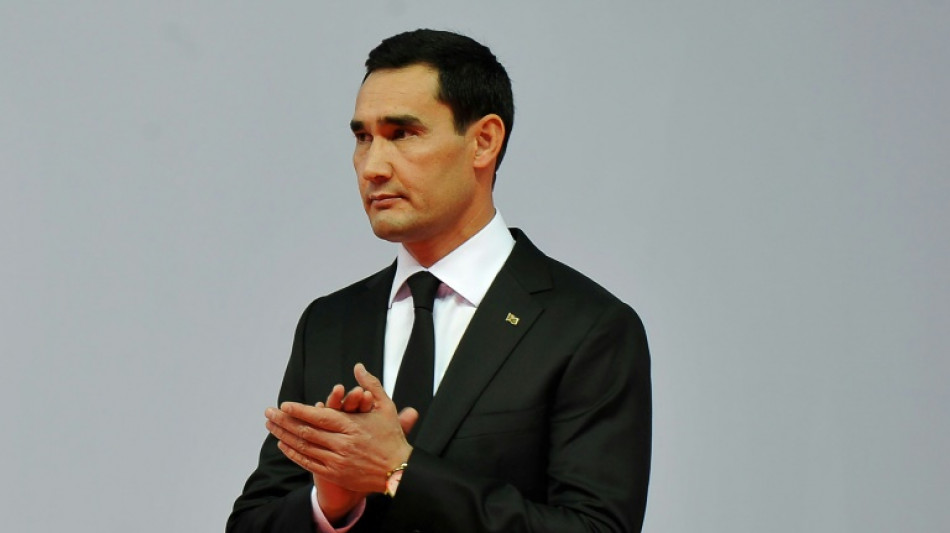 After a fast-tracked rise to the top of his father's secretive government, Serdar Berdymukhamedov has posted a commanding victory in a presidential election marking the start of a dynasty in authoritarian Turkmenistan.

In a historic announcement in February, leader Gurbanguly Berdymukhamedov, 64, revealed plans to step back from the presidency and allow "young leaders" to govern.

The plan followed years of speculation that he wanted to ease son Serdar Berdymukhamedov, now 40, into the saddle of one of the world's most closed-off regimes.

The energy-rich Central Asian country on the Caspian Sea has no free media, honours its authoritarian leaders with ostentatious gold statues and has not admitted any coronavirus cases since the outbreak of the pandemic.

The younger Berdymukhamedov burst into public view as a lawmaker in 2016.

His exposure in fawning state media grew rapidly as he rose to become the nation's second most powerful official.

Last year Serdar Berdymukhamedov boosted his international profile with a four-day visit to Russia and by holding talks in the capital Ashgabat with Wang Yi, the foreign minister of Turkmenistan's top trade partner China.

But the younger man's stony-faced appearances on national television offer few clues as to whether his vision for the country differs from that of the impoverished desert nation's "protector".

During the reign of Turkmenistan's first president Saparmurat Niyazov, he graduated as an engineer from a state agrarian university that bore Niyazov's name.

He then headed a department overseeing the production of "non-alcoholic beer and wine" at a state association, according to his official biography.

But one-time dentist Gurbanguly Berdymukhamedov's elevation from health minister to leader following Niyazov's sudden death in 2006 also signalled a change in fortunes for his son.

From 2008 to 2011 Serdar Berdymukhamedov studied international relations in Moscow, working in parallel as an advisor at one of Turkmenistan's most important embassies.

A stint in Geneva with Turkmenistan's mission to the United Nations office followed, as did jobs at the foreign office and the presidential administration that were not made public at the time.

Coverage of his work in government newspapers began to grow when he was reported as winning a parliamentary by-election in his native Akhal province -- the traditional home of Turkmenistan's elite -- in late 2016.

The last two years have seen Berdymukhamedov move between posts at dizzying speed, becoming deputy foreign minister, Akhal's provincial governor and industry minister prior to a triple promotion in February 2021 that confirmed his status as second-in-command.

The career boost came on the anniversary of his father's first electoral victory and saw him become vice premier in the cabinet, security council seat-holder and auditor-general all at once.

Berdymukhamedov junior's victory margin of 73 percent was notably more modest than his father's first election win with 89 percent in 2007 and subsequent victories in 2012 and 2017 with 97 and 98 percent, respectively.

Regular watchers of Turkmenistan predict that the older man will still be holding the reins, after pledging to remain in politics as chief of the senate.

One thing that seems unlikely to change under his son is the country's avowedly neutral foreign policy, which Berdymukhamedov junior pledged to retain when responding to a journalist's question about foreign affairs on election day.

The younger Berdymukhamedov is well decorated for his years.

In 2017, he received a state medal named in honour of his grandfather, Malikguly Berdymukhamedov, and was given an award for his "love of independent Turkmenistan" in 2019.

Last year he was granted the title of "honoured dog breeder" -- a reference to a role he has as head of an association promoting the welfare of the alabai shepherd dog -- another revered national animal.

As of last year he also heads a similar association supporting the Akhal-Teke horse breed which is famed for its shiny coat and is a powerful symbol in state propaganda.

The role had previously been occupied by his Berdymukhamedov senior, a horse-mad keen equestrian.

One of his children is Kerimguly Berdymukhamedov, a guitar-playing teenager who is regularly shown on state television composing songs and playing sports with his grandfather.