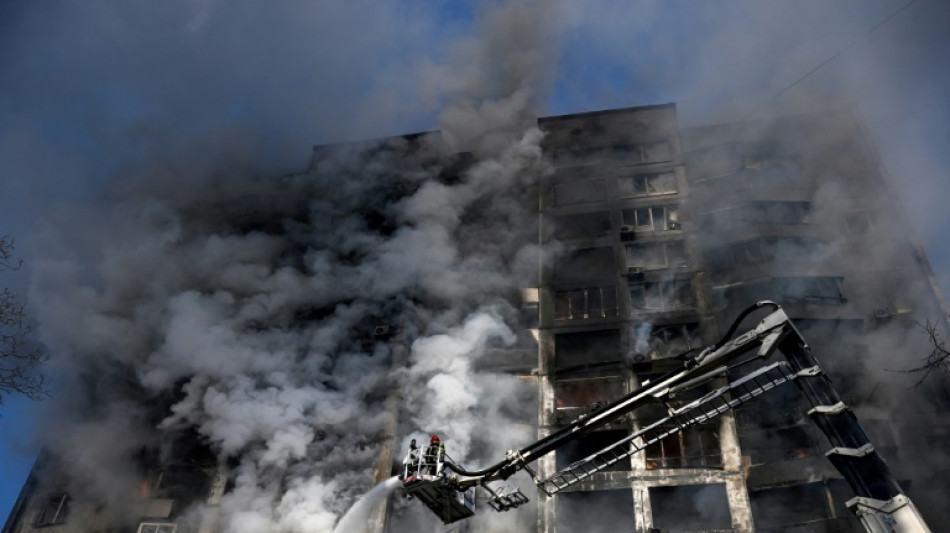 Russian forces press in on Kyiv as curfew begins

Russian forces pressed in on Kyiv Tuesday as a 35-hour curfew began after strikes on residences killed four people in the Ukrainian capital, despite a fresh round of talks aimed at halting the war.

The leaders of Poland, the Czech Republic and Slovenia visited Kyiv in an act of solidarity, while the White House announced US President Joe Biden would attend summits of the EU and NATO next week.

But tensions were mounting as Russia broadened its assault across Ukraine with a huge strike on an airport. Kyiv's mayor Vitali Klitschko said the curfew was in response to an impending "dangerous moment".

In a response to crushing Western sanctions on Russia, Moscow announced that Biden, Canadian Prime Minister Justin Trudeau and top officials from both countries had been hit with measures ensuring "reciprocity".

The EU on Tuesday banned the exports to Russia of champagne and high-end cars, among other luxuries.

According to the United Nations, nearly 1.4 million children have fled Ukraine since the conflict began on February 24 -- almost one child per second. The UN High Commissioner for Human Rights has reported 1,834 civilian casualties.

Zelensky, addressing a key Russian concern used to justify the invasion, said Ukraine should accept that it would not become a member of NATO's military alliance.

"We have heard for years that the doors were open, but we also heard that we could not join. It's a truth and it must be recognised," he told a video conference with military officials.

Ukraine's capital has been transformed into a war zone, with apartment blocks badly damaged by Russian bombardment and half of the city's 3.5 million people now gone.

The 35-hour curfew came into effect from 8:00 pm (1800 GMT), having been announced by Klitschko who said four people had died in the capital on Tuesday.

Mykola Vasylinko, 62, said despite the curfew and the strikes on Kyiv, it was better than where he had come from, the northern city of Chernigiv which has been relentlessly bombarded.

"This is no Chernigiv, which they try to erase from the earth's surface," he said.

Four large blasts were heard from the centre of the capital early Tuesday, sending columns of smoke high into the sky.

A fire swept through a 16-storey housing block, smoke billowing from the charred husk of the building.

Another residential building in the Podilsk area also came under attack.

The district was once "a place to get coffee and enjoy life. Not anymore," Ukrainian MP Lesia Vasylenko said.

A Fox News cameraman, Pierre Zakrzewski, was killed and his colleague Benjamin Hall wounded when their vehicle was struck by incoming fire in Horenka, outside of Kyiv, on Monday, the US network announced.

Earlier on Tuesday, Ukrainian parliament's human rights chief said three other journalists had been killed since the invasion began, including a US reporter shot dead Sunday in Irpin, also on the outskirts of the capital.

Russian troops surround the city to the north and east, and authorities have set up checkpoints, as residents queued outside Kyiv supermarkets to stock up on food and medicine ahead of the curfew.

An AFP team saw large plumes of black smoke spewing out of the airport site but could not get closer as it was cordoned off by soldiers, who said the airport could be bombed again.

In the besieged south-eastern city of Mariupol around 2,000 civilian cars managed to escape along a humanitarian evacuation route, local authorities said, following another 160 cars the previous day.

Outwardly, at least, the two sides are still far apart in negotiations, with Moscow demanding Ukraine turn away from the West and recognise Moscow-backed breakaway regions.

Ukraine is pushing for a ceasefire and Russian troop withdrawal. On Tuesday, Zelensky sounded a note of cautious optimism about ongoing peace talks and claimed Russia was realising victory would not come on the battlefield.

"They have already begun to understand that they will not achieve anything by war," Zelensky said.

He said Monday's talks were "pretty good... but let's see."

Turkey said Tuesday that its foreign minister would visit both Ukraine and Russia this week as Ankara facilitates ceasefire talks.

Russia's military progress has been slow and costly, with Moscow apparently underestimating the strength of Ukrainian resistance.

NATO worries that Russia is gearing up to carry out a chemical attack in Ukraine, secretary general Jens Stoltenberg said, citing "absurd claims" that Ukraine possesses biological weapons labs and warning that Russia would pay "a high price" if it did so.

On Tuesday, Chinese Foreign Minister Wang Yi said Beijing did not want to be impacted by Western sanctions on Russia, as US pressure grows on Beijing to withdraw support from Moscow.

"China is not a party to the crisis, still less wants to be affected by the sanctions," Wang said.

Reports this week said Moscow had turned to Beijing for military and economic help -- prompting what one US official called "very candid" talks between high-ranking US and Chinese officials.

A Britain-based war monitor said Moscow had drawn up lists of 40,000 fighters from Syrian army and allied militias to be put on standby for deployment in Ukraine.

The Kremlin also faces domestic pressure despite widespread censorship of the war.

Marina Ovsyannikova, the dissenting employee, barged onto the set of Russia's most-watched evening news broadcast on Channel One late Monday, holding a poster reading "No War".

Under Russian law, she had risked a maximum sentence of 15 years imprisonment.