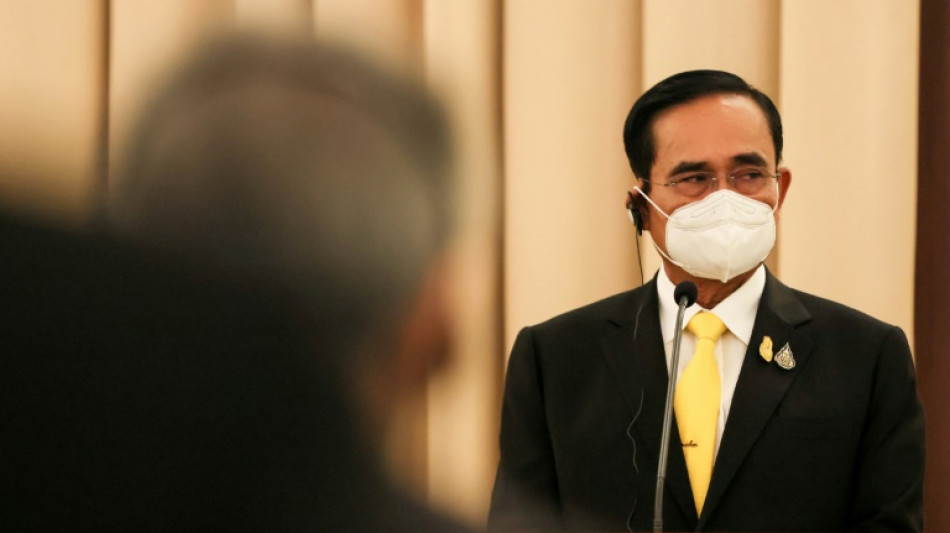 Thailand's embattled prime minister will hold talks with party leaders in his ruling coalition Thursday as he seeks to control growing divisions that could lead to early elections later this year.

Prayut Chan-O-Cha heads a sprawling coalition facing criticism over his mismanagement of Covid-19, a pandemic economy still in the doldrums and simmering tensions over huge 2021 pro-democracy protests that have dominated the past 12 months.

The turbulent political atmosphere in Southeast Asia's second-largest economy has seen a weakened opposition agitate for the prime minister to step down, calling for a no-confidence debate when parliament resumes in May.

While the deputy prime minister has no power over when polls are held, it is the first government indication on the date of national elections -- months ahead of Prayut's term ending in March 2023.

Speaking after his deputy's remarks, Prayut refused to comment on a possible election date.

If polls are held after the APEC summit -- or sooner -- analysts say they could return an unfavourable result for Prayut.

"A lot of Thais want to see General Prayut out of office," said professor Thitinan Pongsudhirak at Bangkok's Chulalongkorn University.

"The economy is not doing well. The population still remembers the early pandemic incompetence when there were no vaccines in the country."

Thailand's economy has been hammered by the pandemic, growing by just 1.6 percent last year after a 6.2 percent contraction in 2020 -- its worst performance since the 1997 Asian financial crisis.

Paul Chambers, of the Center of ASEAN Community Studies at Naresuan University in Thailand, believes the longer the premier can stave off elections, the better it will be for him.

"Prayut is so unpopular today that he could only be re-elected with the Senate's help," he said, a reference to Bangkok's second chamber, which is stacked with pro-government figures.

"Thus, waiting as long as possible for the Senate to help him win re-election best helps Prayut sustain his power."

The former army chief, who led a 2014 coup before taking power as prime minister after the 2019 election, leads a 16-party coalition that holds 248 seats compared with the opposition's 208.

But his base is fragmenting. In January, a faction of 20 MPs from his Palang Pracharat party was kicked out over internal squabbles.

And last month, seven ministers from a junior coalition party refused to attend a cabinet meeting in a row over an extension to the concession for Bangkok's Sky Train urban railway.

Prayut has sought to buttress his coalition by reaching out to smaller groups and must drum up enough support to survive a no-confidence debate tabled by the opposition when parliament reconvenes in May.

Titipol Phakdeewanich, dean of the political science faculty at Ubon Ratchathani University, said the mechanism was more of a pressure gauge for the opposition, and not likely to bring down the government.

In any case, the constitution drafted in 2017 tilts the scales in favour of pro-military parties.

In 2019, Prayut's party was only the second-largest in terms of seats, but with the help of the Senate, stuffed with supporters, managed to form a coalition.