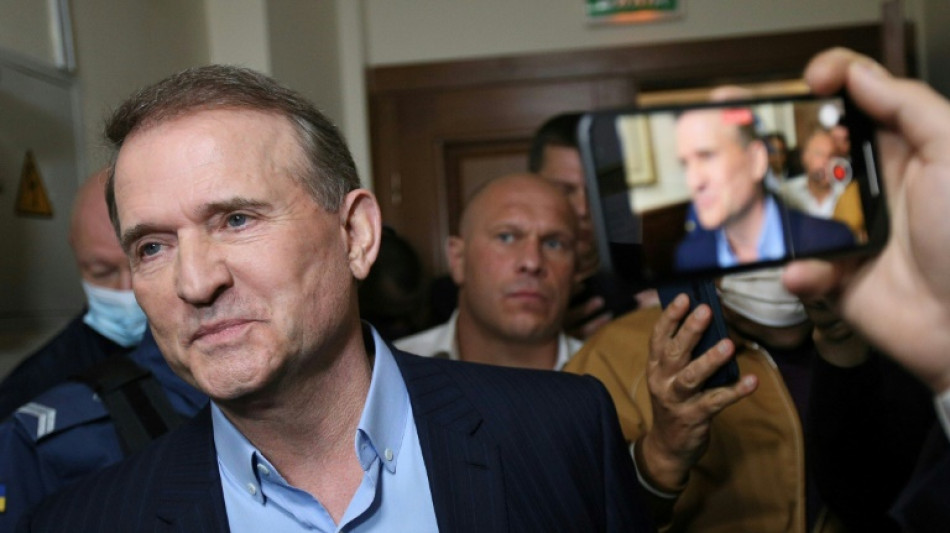 Ukrainian tycoon Viktor Medvedchuk, one of 56 prisoners handed over to Russia on Wednesday in exchange for 215 imprisoned soldiers, was seen as President Vladimir Putin's top ally in Kyiv and defended the Kremlin's interests for years.

The swap was the biggest exchange between the warring sides since the start of Russia's invasion in February.

"In exchange for the life and freedom of our defenders, Ukraine gave Medvedchuk away," Ukrainian chief prosecutor Andriy Kostin said in a Facebook message on Thursday.

The super-rich powerbroker, once dubbed the "dark prince" of Ukrainian politics, was accused of high treason and attempting to steal natural resources from Russia-annexed Crimea and of handing Ukrainian military secrets to Moscow.

"The pre-trial investigation has been completed. Medvedchuk's testimonies are documented. We do not release anyone but transfer them from a Ukrainian prison to a large prison called Russia," sOperating from the shadowsaid Kostin.

News of the capture of Medvedchuk -- listed by Forbes last year as Ukraine's 12th richest person and widely reviled for his close links to the Kremlin -- sparked celebration among Ukrainians online.

Medvedchuk and the Kremlin denied that he pulled the strings for Moscow in Kyiv but the businessman made no secret of his proximity to Putin.

The ties between the two men date back to the early 2000s and Medvedchuk said the Russian leader is godfather to his youngest daughter, Darya.

Medvedchuk and Putin were regularly photographed together at lavish events, including the Formula 1 race in Sochi.

"We have a great relationship. It has been built over many years," he said in an interview with AFP back in 2019.

- Operating from the shadows -

The authorities in Kyiv certainly believed that Medvedchuk remained a key Kremlin asset.

Ukraine's security chief at the time, Ivan Bakanov, said Russia's FSB intelligence agency was looking to spirit him out of Ukraine.

And Ukrainian President Volodymyr Zelensky suggested swapping Medvedchuk for captured Ukrainian soldiers -- although the idea was dismissed by Moscow.

"He is a foreign politician," Putin's spokesman Dmitry Peskov said in April.

Medvedchuk, a former lawyer, was long at the centre of Ukraine's murky nexus between money and politics.

The chief of staff to the country's second president, Leonid Kuchma, he was accused of playing a key role in attempts to rig a 2004 vote in favour of pro-Russian candidate Viktor Yanukovych.

That election sparked an uprising known as the Orange Revolution. The uprising foreshadowed the later Maidan revolution, which shifted Ukraine towards the West in 2014 and ousted Yanukovych from power.

Medvedchuk continued to operate from the shadows during the turbulence rocking his homeland, as Moscow responded by seizing the Crimea peninsula and igniting a war in eastern Ukraine.

He was sanctioned by the United States for undermining the government and was involved in peace talks and negotiations for prisoner exchanges as a go-between.

Eventually, he bounced back to the centre of the political stage.

In the 2019 parliamentary elections, he headed the Moscow-backed Opposition Platform-For Life party, which came second behind Zelensky's bloc.

But Medvedchuk's fortunes began to deteriorate in February 2021.

Zelensky banned three pro-Russian television channels he was tied to and the authorities then seized his family's assets, including a pipeline transporting Russian oil to Europe.

In May of that year he was charged with "high treason" over accusations of attempting to steal assets from Russia-annexed Crimea and later also for trying to buy coal from separatist-held regions.

He denied the allegations but was placed under house arrest.

Putin denounced the crackdown against him as a "political" purge and vowed to "respond".

"Medvedchuk was Putin's deputy, his most trusted man, his eyes and ears in Ukraine, who broadcast messages from Moscow" through his media, former lawmaker Sergiy Leshchenko said.

As fears mounted of a Russian invasion, the US in January accused Medvedchuk of involvement in efforts by Russian intelligence services to prepare friendly Ukrainian politicians to take control of the country with the backing of occupying forces.

A few days after Russian troops rolled across the border, Ukrainian police announced Medvedchuk was missing, after officers failed to find him during a check of his lavish home near Kyiv.

In the wake of his escape, Ukrainian media discovered on land at his residence a large train carriage decorated with gold and velvet and the Russian coat of arms, apparently a birthday present from his wife, TV presenter Oksana Marchenko, who fled to Russia.