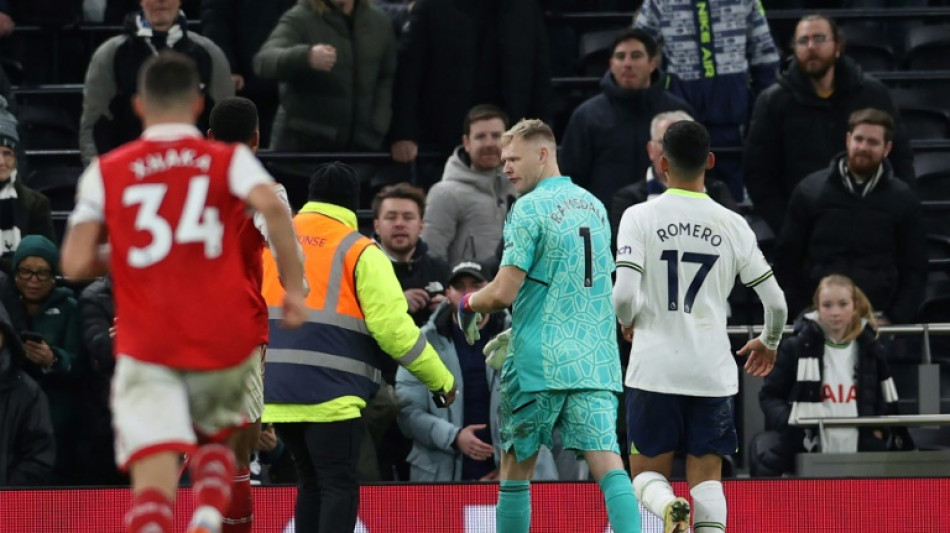 Tottenham promised to take the "strongest possible action" after Arsenal goalkeeper Aaron Ramsdale was kicked by a fan following the Gunners' 2-0 win in the north London derby on Sunday.

"We are appalled by the behaviour of a supporter that attempted to attack Arsenal goalkeeper Aaron Ramsdale at the end of today's match," Tottenham said in a statement. "Violence in any form has no place in football."

"The club has reviewed its CCTV footage to identify the supporter and will be working with the Met Police, Arsenal and Aaron Ramsdale to take the strongest possible action, including an immediate ban from Tottenham Hotspur Stadium."

Ramsdale made a number of crucial saves to help Arsenal move eight points clear at the top of the Premier League with their first away league win against their local rivals since 2014.

The England international exchanged words with Tottenham forward Richarlison after celebrating in front of the stand behind his goal at full-time.

The supporter then leapt onto the advertising boards at the side of the pitch to kick out at Ramsdale.

"The Spurs fans gave me some throughout the game," Ramsdale told Sky Sports.

"I was giving some back. The people I did give it to greeted it in sportsmanlike terms but one fan tried to give me a little punch on the back.

"It is a shame as it is just a game of football at the end of the day. Both sets of players tried to bring me away but thankfully nothing too drastic happened.

"It is a sour taste but I'm sure we will enjoy it when we go back into the dressing room."

Tottenham manager Antonio Conte called for more respect to be shown to the players.

"To be able to show always respect is better, in any moment, for the opponent, for the players," said Conte. "I didn't like it."

Spurs defender Eric Dier, who had his own confrontation with a fan at the Tottenham Hotspur Stadium in 2020, said the incident was "unacceptable."

The Professional Footballers Association (PFA) said such attacks are taking place "far too often" and called for tougher action to be taken against violent supporters.

"Violence towards players is completely unacceptable. These types of incidents are happening far too often," the PFA said in a statement.

"Players have a right to be safe in their place of work. When a player is attacked we expect the laws and regulations that are in place to protect them to be properly enforced.

"As the players' union we treat this as a priority issue. We will be continuing to work with the authorities to demand that players and staff are better protected in their place of work."