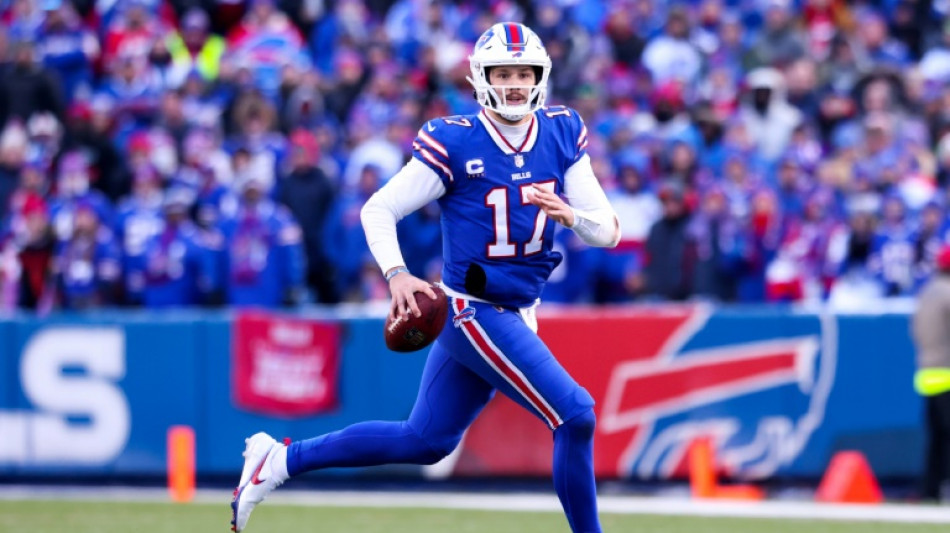 Josh Allen shrugged off an error-strewn display to lead the Buffalo Bills to a 34-31 victory over the Miami Dolphins in the NFL playoffs on Sunday while the New York Giants upset the Vikings 31-24 in Minnesota.

Quarterback Dan Jones led the Giants to a victory which sets up a clash with the Philadelphia Eagles in the divisional round, delivering a near immaculate display, throwing for 301 yards and two touchdowns while rushing for 78 yards.

In Buffalo, the heavily favored Bills looked to be motoring towards a comprehensive win after a dominant start.

Allen connected with Dawson Knox from six yards for the opening score and then James Cook rushed over from 12 yards to put the Bills 14-0 ahead.

A Tyler Bass field goal made it 17-0 with Buffalo firmly in control against a Miami team forced to start third choice quarterback Skylar Thompson.

But Miami got back into the game with three field goals from Jason Sanders to trim the Bills' lead to 17-9.

A two-point conversion levelled the score at 17-17 before another Bass field goal allowed Buffalo to regain the lead at 20-17 at the break.

But Miami came roaring back at the start of the third quarter, with Eric Rowe flattening Allen to force a fumble.

Dolphins defensive tackle Zach Sieler scooped up the loose ball and gleefully scampered into the end zone to help Miami take a 24-20 lead.

Allen steadied the ship however with back-to-back touchdown drives for Buffalo.

First he teed up veteran receiver Cole Beasley from six yards to restore Buffalo's lead at 27-24.

The Bills quarterback, who finished with 352 passing yards and three touchdowns, then found Gabe Davis with a dart from 23 yards to put Buffalo 10 points clear at 34-24.

Miami set up a tense finale when Jeff Wilson rushed over from close range early in the fourth quarter to put the Dolphins within a field goal at 34-31.

But Buffalo's defense held firm to ensure the Bills advanced.

"The turnovers really let them back in the game," Allen said. "It's just things you can't do -- you can't expect to win like that. So some things to clean up."

"All that matters is surviving and advancing – doesn’t matter how we win it’s if we win," he added.

The Vikings (13-4) started as favourites against the 9-7 Giants who hadn't won a playoff game since their Super Bowl winning season in 2011.

But Jones, allied with the powerful rushing of running-back Saquon Barkley, who had two touchdowns, triumphed in a game where both offenses dominated.

Vikings quarterback Kirk Cousins opened the scoring with a one-yard run after Justin Jefferon's touchdown effort had been ruled just short on review.

The Giants responded strongly though with Barkley bursting 28 yards down the left and then put themselves 14-7 up with Jones finding Isaiah Hodgins with a 14-yard pass.

New York extended their lead with a field goal before the Vikings reduced the deficit before half-time with Cousins connecting with K.J. Osborn on a nine yard touchdown pass.

Jones led the Giants to a 10-point lead with a nine-yard pass to Daniel Bellinger but the Vikings kept themselves in contention with an Irv Smith reception on a three-yard pass from Cousins after an eight-play drive.

The Vikings pulled level with a field goal from Greg Joseph before Barkley ran in his second touchdown and the Giants defense delivered in the final stages.

Cousins had one last chance to force the game into overtime but on fourth and eight he found T.J. Hockenson but Xavier McKinney got him to the ground before he could make the first down and keep the drive alive.

The Cincinnati Bengals were hosting the Baltimore Ravens later on Sunday.