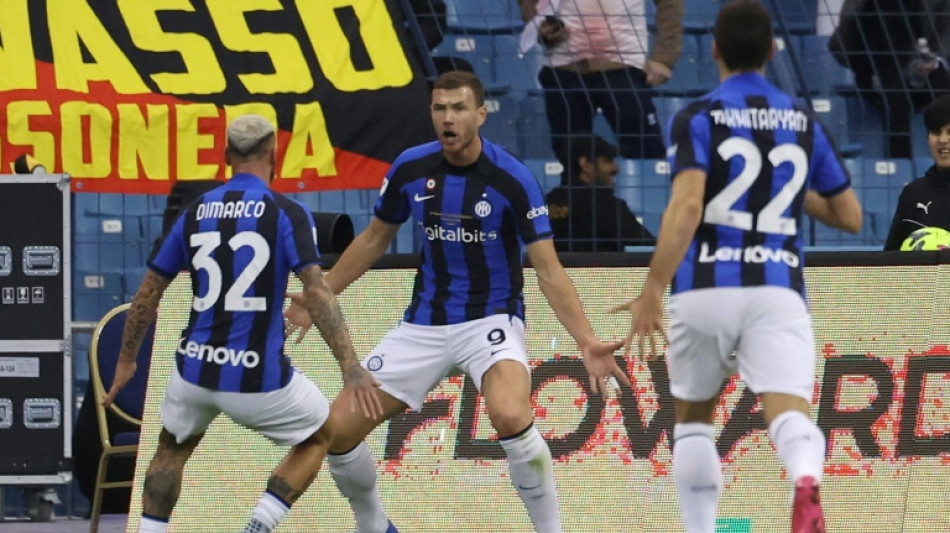 Inter Milan retained the Italian Super Cup on Wednesday after Edin Dzeko inspired his team to a 3-0 victory over local rivals AC Milan.

The damage was done in the opening 21 minutes in Riyadh thanks to Dzeko, who played a defence-splitting pass for Federico Dimarco's 10th-minute opener and doubled Inter's lead 11 minutes later.

Lautaro Martinez then added a brilliantly taken third in the 77th minute to underline Inter's superiority on a night in which Milan simply didn't show up.

Inter claim the Italian season's first trophy as they did last year when they beat Juventus.

"We put in a great performance, the boys were brilliant from the first minute until the final whistle," Dzeko told Mediaset.

"We won the Super Cup last season so we knew how great it is to win it... I'm really happy that we're bringing home another trophy, and I hope there will be more in the future."

Without the raucous soundtrack of a packed San Siro, Wednesday's match in Saudi Arabia was an unusual Milan derby but that won't stop Inter fans claiming local bragging rights as well as the Super Cup for the seventh time.

Both teams are trailing way behind Napoli in what is beginning to look like a one-team title charge but Inter appeared a class above the uninspired Italian champions who barely laid a glove on Simone Inzaghi's side.

Milan continued their sluggish start to the new year and Dzeko punished them by helping Inter to a two-goal half-time lead which was more than deserved.

The 36-year-old beautifully sent Nicolo Barella scampering in behind Milan's defence, allowing the Italy midfielder to roll a low pass which compatriot Dimarco had no problems tucking away.

Dzeko then punished sloppy Milan defending of a free-kick by charging through onto Alessandro Bastoni's drilled pass, cutting inside Sandro Tonali and driving home a fine strike from a tight angle.

Milan huffed and puffed in the second half but the closest they came to getting back into the game was the underwhelming Rafael Leao smashing over the bar three minutes after the break.

And Martinez made absolutely sure Inzaghi would claim his fourth Super Cup as a coach when the Argentina forward span a bamboozled Fikayo Tomori and controlled Milan Skriniar's long pass before tucking home a beautiful finish with the outside of his right foot.