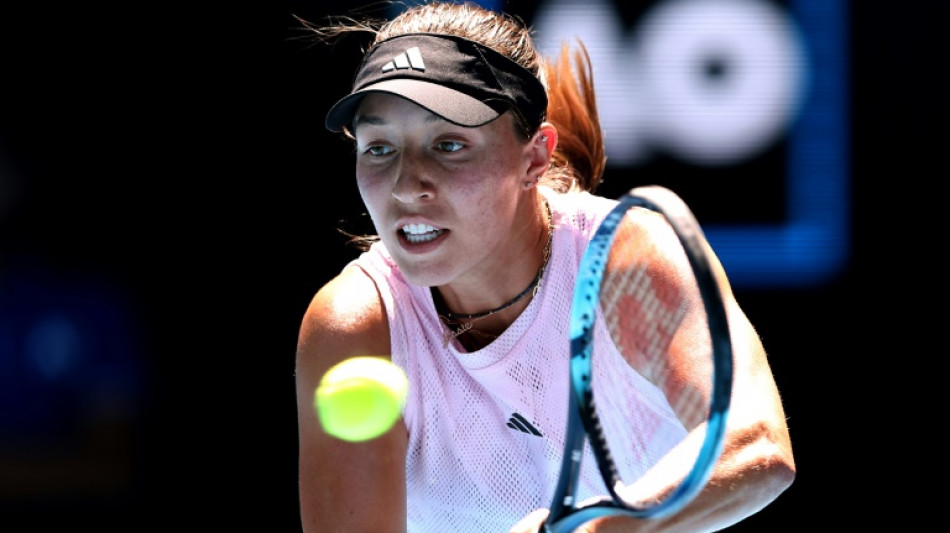 Intimidating Pegula 'winning' even before playing at Australian Open

Jessica Pegula powered into the Australian Open last 16 Friday and then warned her confidence is so high she feels like she's won even before stepping on court.

Pegula has been climbing the world rankings steadily for the past couple of years and needed just 65 minutes to canter past Kostyuk.

She has reached the quarter-finals on her last two visits to Melbourne Park and can make it a hat-trick if she beats 20th seed Krejcikova on Sunday.

"I definitely feel like now I can walk out there and I'm winning before I step out on the court," the 28-year-old told reporters.

"It's a weird feeling to have that because before, you know, I didn't feel like that.

"I've always wondered what that felt like. Now I feel like the last few Grand Slams, more than that really, you get so much more comfortable," added Pegula who has dropped just 11 games in six sets at this year's Australian Open.

Pegula led the US to the United Cup title in Sydney two weeks ago, crushing world number one Iga Swiatek 6-2, 6-2 and leaving the Pole in tears on the way to their triumph.

"I feel like I'm in control the whole time. Again, you're in charge of the moment. The moment's not really getting to you," she said, revelling in a new-found ability to intimidate her opponents.

"Sometimes I do feel, now that I'm on the other side, I can feel the girls kind of panicking a bit, maybe not playing to their full potential because maybe it's a little overwhelming.

"They feel like they have to do more against me. It's a different feeling, for sure."

Pegula and Kostyuk had only met on one previous occasion, in Cincinnati last year, with the Ukrainian taking the first set before the American outlasted her 6-7 (5/7), 6-1, 6-2 in 2hr 7min.

There was no chance of a repeat on Friday, Pegula ruthlessly racing to a triple break on her way to taking a first set "bagel".

Kostyuk did finally trouble the scorers at the start of the second, but it proved to be the only game she won on her own serve as Pegula cruised to victory.

"I've watched her quite a bit. She's had a great last couple of years," said Pegula of Krejcikova, who beat the 39th-ranked Anhelina Kalinina 6-2, 6-3 in 1hr 26min on Rod Laver Arena.

Krejcikova, like Pegula, is yet to drop a set and fired a warning back to her opponent.

"I think with every single match I'm getting better and better," said the Czech.

"My serve was working really well today, I played really good returns and from the baseline. I played also a very solid game. Today was a really, really great match for me."