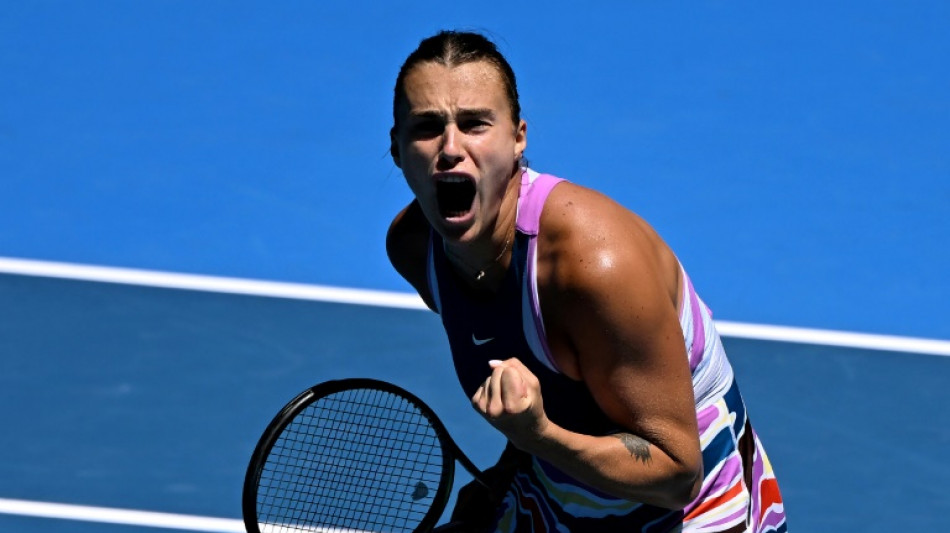 Aryna Sabalenka said she was reaping the benefits of a more positive mindset after crushing Belinda Bencic to reach her first Australian Open quarter-final on Monday.

The fifth seed won 7-5, 6-2 after a brutal display of power-hitting, with no signs of the nerves that have afflicted the richly talented Belarusian's game in the past.

The 1hr 27min demolition of the 12th seed on Rod Laver Arena set up a clash against unseeded Croatian Donna Vekic in the last eight.

Sabalenka dropped her serve early in the first set, something that might have precipitated a loss of confidence or even a bout of the serving "yips" in the past.

But the 24-year-old demonstrated her new-found mental steel, and rapier serve, to stay patient before breaking back and taking the match by the scruff of the neck.

"My whole life it took me a little while to understand that negative emotion is not gonna help you on court," said Sabalenka.

"You have to just stay strong and believe no matter what, and then do everything you can.

"So just super happy with the mindset during the game today. I did a wonderful job."

Sabalenka has reached the US Open semi-finals in each of the last two seasons and made the final four at Wimbledon in 2021.

But she would not divulge, when asked by reporters, if her new confidence meant she had set herself a goal of winning a maiden Grand Slam this year.

"I don't want to talk about that," she said. "I think we all have the same targets, like every player.

"I would say that I'm trying to be really professional on the court, do everything I can every match -- no easy wins for my opponents. That's the main thing."

Sabalenka and Bencic have both been on a roll this year in Australia and came into the first Grand Slam of the year as the form players.

They each won titles in Adelaide this month and were yet to drop a set in Melbourne before their last-16 showdown. Both were on seven-match unbeaten runs.

The Belarusian had taken just 74 minutes to rip past her former doubles partner Elise Mertens in the previous round.

Olympic champion Bencic, of Switzerland, was just as dominant in her 6-2, 7-5 victory over Italy's Camila Giorgi but confessed she could not handle Sabalenka in this mood.

"I thought I had a few chances there, but against her, of course, you have to take really every chance you get," said Bencic, who won the gold medal at the Tokyo Olympics in 2021.

"I felt like I couldn't handle her power. I think that was the biggest difference," she added.

The pair exchanged early breaks in a high-quality first set which ended on a sour note for Bencic, who blinked first under relentless pressure from Sabalenka.

Serving at 5-6, Sabalenka hammered a forehand return winner past the Swiss to bring up two set points, only for Bencic to serve her fourth double fault and gift the advantage to her higher-ranked opponent.

At 2-1 in the second, Sabalenka increased the intensity again, pummelling deep returns.

Bencic, no slouch herself when it comes to hitting a tennis ball hard, was forced into the retreat and again served a double fault on break point.

The end followed a few minutes later, when another forehand winner from Sabalenka secured a second break and the match.