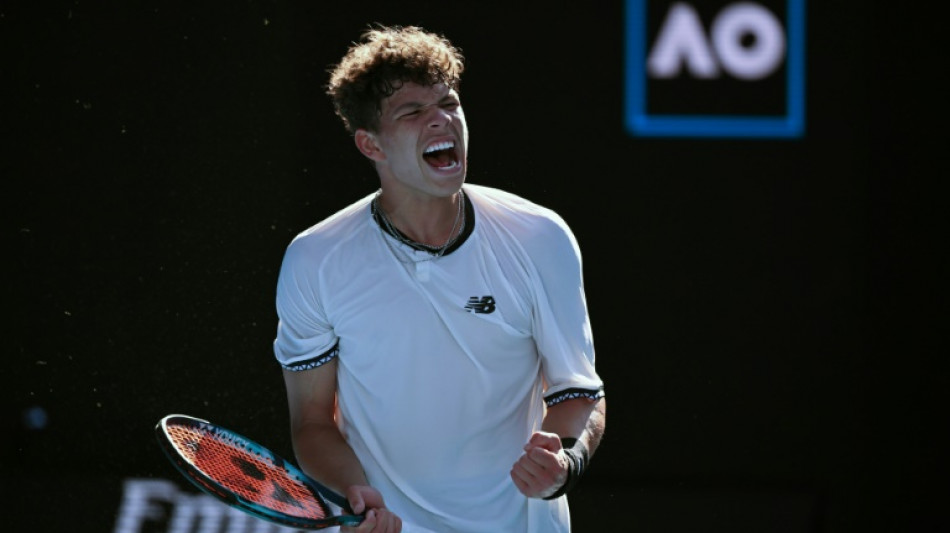 Ben Shelton now wants to test himself in tournaments across the world after his first time outside the US ended in the Australian Open quarter-finals Wednesday -- as long as he can keep up his studies.

Now ranked a relatively heady 89th in the world, Shelton was down at 569th a year ago and at the University of Florida.

He is still taking online classes but his life will never be the same after his shock run to the last eight, in what was his first time ever outside the United States.

The young American, whose father Bryan was also a player and reached 55 in the world, is relishing testing his game on clay and then grass.

"Obviously new experiences for me playing those tournaments that will mostly be outside of the United States," he said following defeat to compatriot Paul.

"I'm really looking forward to it. I have confidence that I'll be able to figure it out."

Before that, it will be back home and he needs to find a way to balance his tennis with studies in entrepreneurship and international business.

"My school is all online, so it's classes that I can work on at the hotel at night," he said.

"It doesn't change too much of my routine, taking these classes. I haven't had too much trouble with it.

"I think maybe it could get tricky if travel days match up with exams, so far I've been able to navigate it."

Aside from a newfound fame at home and abroad, Shelton will take away good memories from Australia and confidence about what he can achieve next.

"I've learned that I have the ability to be really tough on the court, to stay tough for five sets," said Shelton, whose only previous Grand Slam appearance was a first-round exit at last year's US Open.

"I've kind of proven to myself that I can hang with a lot of people for extended periods of time out on the court."

Shelton's story, from unknown college kid to last eight at a major, won him plenty of admirers in Melbourne.

He was given a warm sendoff in his brave defeat to Paul, who also applauded his younger American off.

"The crowds have been pretty unbelievable," said Shelton.

"They supported me. I definitely didn't expect it coming into this tournament, being an American.

"They kind of treated me like one of their own."