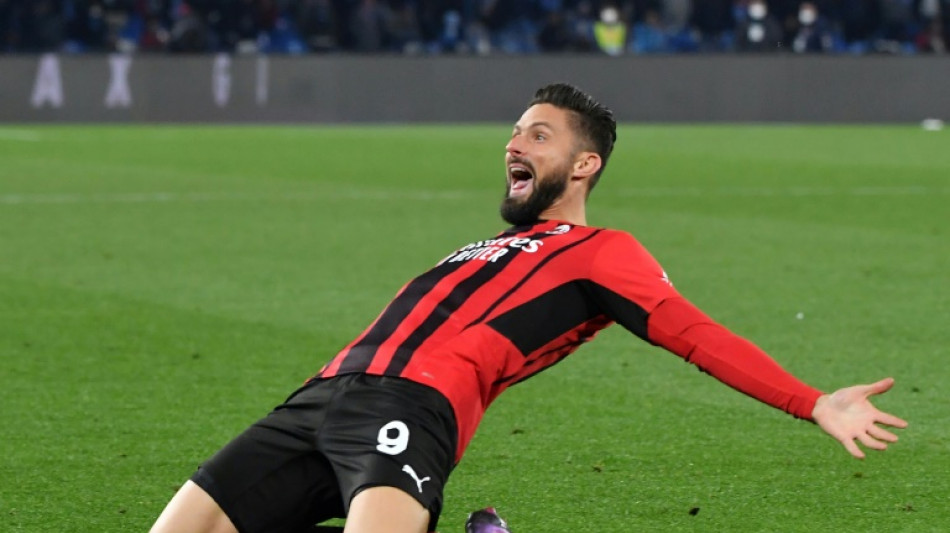 Olivier Giroud struck a huge blow for AC Milan in the Serie A title race with the only goal in Sunday's 1-0 win at Napoli which fired his team top of the pile.

Veteran forward Giroud diverted home a wayward shot three minutes after the break at the Stadio Diego Armando Maradona to put Milan two points clear of local rivals Inter Milan, who had claimed the summit with a 5-0 thumping of Salernitana on Friday.

The Frenchman's eighth league goal of the season was his first away from the San Siro since signing from Chelsea in the summer and came on an eventful night for the 35-year-old.

It looked as though he wouldn't finish the match midway through the first half when he was flattened by Kalidou Koulibaly and was down for over two minutes as medics tried to patch up a bleeding gash above his ankle.

Giroud then clattered into David Opsina seven minutes before half-time, leaving the Napoli goalkeeper worryingly prone on the grass before he eventually got up and carried on.

A recovered Ospina did well to tip aside Ismael Bennacer's low drive just before the hour mark, while Theo Hernandez and Alexis Saelemakers could have extended the margin of victory late on in a hugely impressive display which underlines their title credentials.

Alvaro Morata scored for the first time since mid-January with 20 minutes on the clock at the Allianz Stadium in Turin to keep Juve in the race.

Juve are applying pressure thanks to a run of 14 league matches without defeat stretching back to the end of November.

Coach Massimiliano Allegri has repeatedly insisted that Juve are not in the title race and Morata was equally evasive when asked about his team's ambitions for the season.

"I'm of my own opinion which is to think about the next training session and the next match. We can't think about it too much," he told DAZN.

Sunday's was a far from accomplished performance from a team missing a host of players including Paulo Dybala, Weston McKennie, Giorgio Chiellini, Leonardo Bonucci and Denis Zakaria.

Spezia were excellent in the second half and had two great chances to level, with Emmanuel Gyasi heading a huge opportunity straight at Wojciech Szczesny five minutes after the break and the Poland goalkeeper at his best to stop Kevin Agudelo with 10 minutes remaining.

Krzysztof Piatek scored his sixth Fiorentina goal since arriving as Dusan VLahovic's replacement in January in a 1-1 home draw with Verona.

Domenico Berardi continued his impressive season for 10th-placed Sassuolo with a brace of penalties in a 4-1 win at struggling Venezia.

Berardi has scored 12 times this league season and is also in double figures for assists in the best campaign of his career.

With Federico Chiesa out for the season the 27-year-old will be in Italy boss Roberto Mancini's thoughts ahead of the Azzurri's crucial 2022 World Cup qualification playoffs later this month.