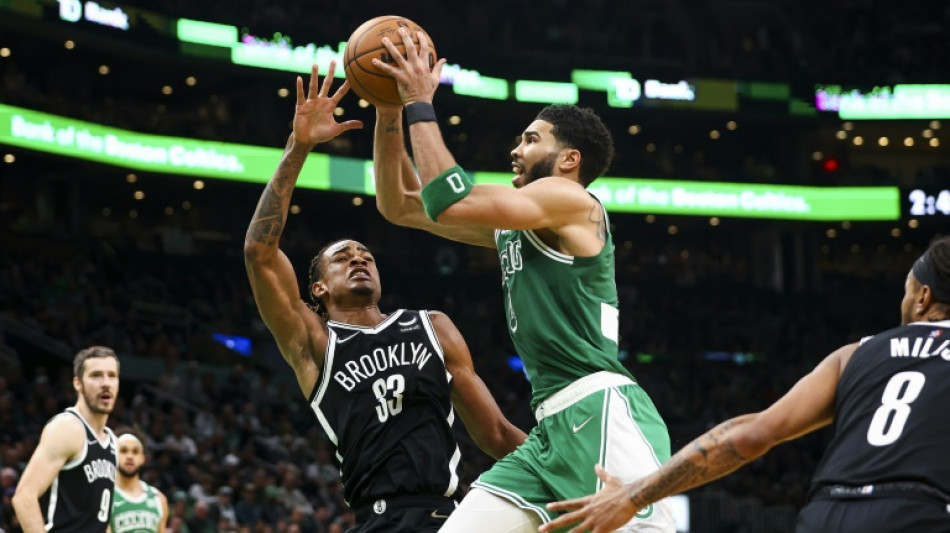 Jayson Tatum erupted for 54 points as the Boston Celtics defeated the Brooklyn Nets 123-117 on Sunday.

The victory was the Celtics' 14th win in their last 16 outings, and leaves them in fifth place in the NBA Eastern Conference standings with 39 wins and 27 losses.

"This is what I dreamed about as a kid," Tatum said afterwards.

"I worked my whole life to get here. Obviously I have a long way to go before I accomplish what I want to accomplish, but I'm staying in the moment and enjoying it, doing what I love every day."

Tatum's display stymied a Brooklyn side who welcomed both Kevin Durant and Kyrie Irving to the same starting line-up for only the fourth time this season.

Durant finished with 37 points for the Nets while former Celtics player Irving added 19.

Irving was taunted mercilessly throughout by Boston's raucous home crowd, with chants of "Kyrie Sucks" echoing around the TD Garden arena.

Jaylen Brown added 21 points while Marcus Smart finished with 14. Al Horford (13 points) and Robert Williams III (10) completed the bulk of the scoring for the hosts.

Brooklyn got off to a fast start to lead by five points after the first quarter, and took a nine-point lead in the third.

But Boston hit their stride down the stretch and pulled clear thanks to an 18-point fourth quarter haul from Tatum to seal victory in a game that saw the lead change hands 28 times.

"Obviously we've been on a good stretch. We're just having fun competing. It wasn't always pretty today but everyone contributed and we just figured it out.

"And those are the best wins -- when you just figure it out, find a way to win whatever it takes. And that's what we did."

Elsewhere Sunday, the Milwaukee Bucks battled past a depleted Phoenix Suns with a 132-122 win at the Fiserv Forum.

Middleton's 16 points in the fourth quarter proved decisive for Milwaukee, who pulled away late on to claim a victory that leaves them third in the Eastern Conference at 40-25.

"He tends to be the guy that gets us organized. There's so many more things he does than just score. You need games like that from your best guys, and that was a hell of an effort from Khris."

Middleton was backed by Jrue Holiday with 24 points while Giannis Antetokounmpo was restricted to a modest 19 points.

The Suns remain comfortably in front at the top of the Western Conference with a 51-13 record, leading Memphis in second by 7.5 games.