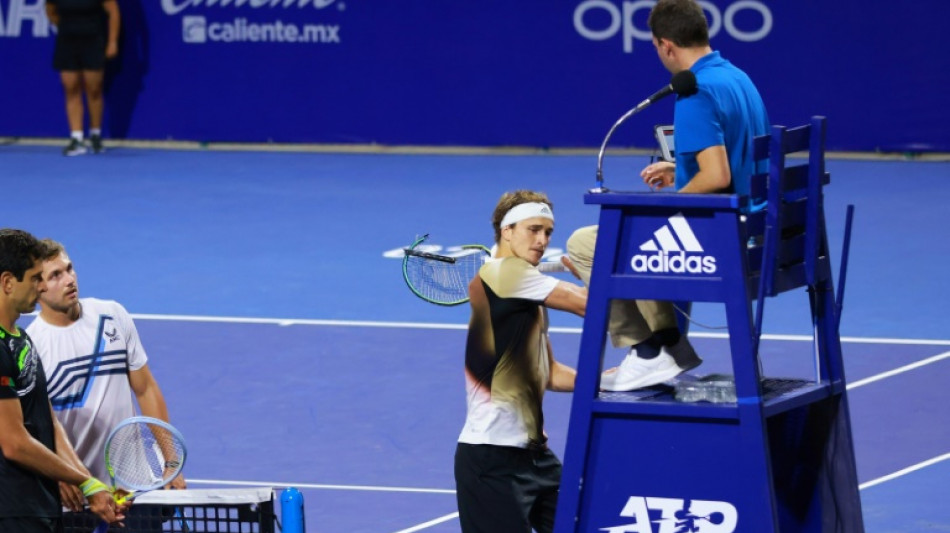 Zverev gets probation over Mexico meltdown

Alexander Zverev was handed a suspended sentence on Monday following his violent outburst and disqualification in Acapulco last month, the ATP Tour said.

The 24-year-old Olympic champion was banned for eight weeks and fined an additional $25,000 following his Mexico meltdown.

The world number three had already been fined $40,000 for verbal abuse and unsportsmanlike conduct.

However, both the ban and additional $25,000 fine will be suspended provided Zverev does not incur a further code violation in the 12-month period ending February 22, 2023.

"If the conditions are met, the penalties will be formally dismissed following the completion of the probation period," the ATP said in a statement.

"If the conditions are not met, the penalties will be invoked after any appeal process is exhausted."

Zverev shocked the tennis world during the Mexico Open last month after smashing his racket several times against umpire Alessandro Germani's chair after a doubles match.

He also delivered a volley of verbal abuse at the official after Zverev and partner Marcelo Melo had been eliminated, earning him disqualification from the tournament.

The ATP said a review of Zverev's conduct found he had committed "aggravated behavior" under the ATP's played conduct rules.

Zverev issued a public apology following his Acapulco disqualification, saying his behavior had been "unacceptable."

"It is difficult to put into words how much I regret my behavior during and after the doubles match yesterday," Zverev wrote.

"I have privately apologized to the chair umpire because my outburst towards him was wrong and unacceptable."

Zverev is due to play in the ATP/WTA Indian Wells tournament, which gets under way in California later this week.