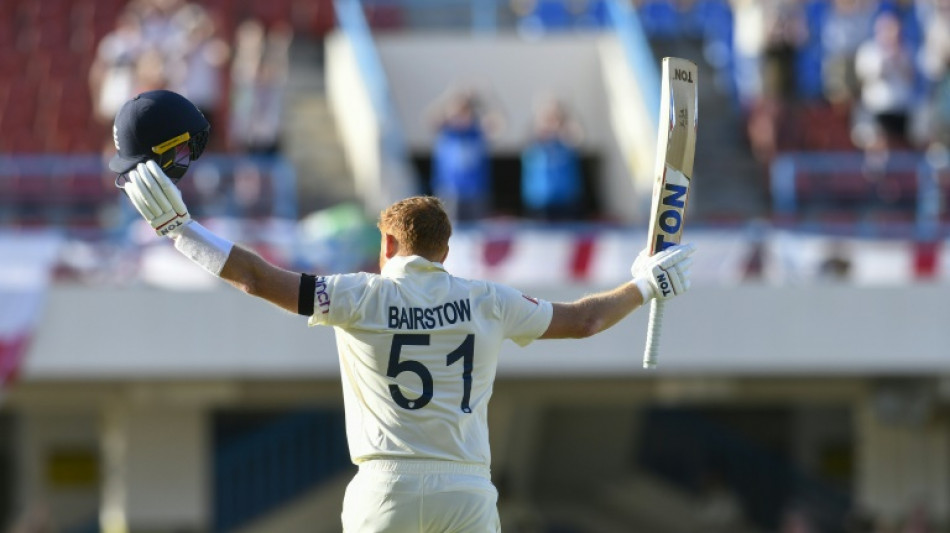 Jonny Bairstow's eighth Test hundred anchored England’s revival from a woeful start in reaching 268 for six at stumps on the opening day of the first Test in Antigua on Tuesday.

Bairstow’s composed, unbeaten 109 was the foundation upon which the tourists rallied from 48 for four after captain Joe Root opted to bat first on winning the toss on a pitch which looks set to deteriorate as the match progresses.

One of the few England players to emerge with any credit from an abysmal Ashes campaign which ended in Australia just two months earlier, the 32-year-old Yorkshireman displayed the resolve which earned him a century in his previous Test at the Sydney Cricket Ground.

He faced 216 deliveries, stroking 17 fours in an effort already spanning more than five hours to tilt the balance of the day’s play significantly.

Bairstow received invaluable support from Ben Stokes (36) in putting on 67 for the fifth wicket to trigger the resistance.

That was followed by an even more productive association with Ben Foakes (42) as 99 runs were added for the sixth wicket before another all-rounder Chris Woakes (24 not out) ensured the Englishmen capitalised on a tiring Caribbean side with an unbroken seventh-wicket stand already worth 54 runs.

“We’ve spoken about partnerships and how invaluable they can be, not just up at the top but throughout the order and it’s very important for us to continue that effort tomorrow,” said a beaming Bairstow at the end of the day.

“I think there’s plenty still in it (for the bowlers) so we have to continue to bat well again.”

In stark contrast to the opening exchanges when the West Indies seemed capable of doing no wrong, the next two sessions of the day belonged to the visitors as 211 runs were added for the loss of just two more wickets.

Even the advent of the second new ball in the last half-hour of the day failed to dent the resolve of Bairstow and Woakes as pacers Kemar Roach, Jayden Seales and former captain Jason Holder, who had taken two wickets each earlier, posed little threat to the well-set pairing.

While Bairstow was concerned about the pitch already showing signs of deterioration, Roach held a different view.

“Obviously we were tiring in that final session of the day and should have been tighter with our lines and lengths,” he acknowledged. “We have to get the remaining wickets as quickly as possible and then go out there and respond strongly to give ourselves a first innings lead. I think it is a very good pitch to bat on.”

West Indies may be left to rue a chance missed by the usually safe Holder at third slip when a diving effort to his right off Woakes was grassed in that final session, much to the chagrin of the other unlucky fast bowler in the quartet, local boy Alzarri Joseph.

England’s fragile top-order had again been exposed within the first half-hour of the match with Root’s dismissal eliciting the greatest celebration from the West Indian players.

He was the second wicket for Roach after the senior seamer had removed debutant opener Alex Lees via a leg-before decision in the day’s third over.

Seales then accounted for the other opening batsman, Zak Crawley, in the next over via an outstanding low diving catch by Joshua da Silva as the wicketkeeper reacted to a sharp inside-edge from an attempted forcing off-side shot.

England appeared to finally have a bit of fortune going their way when Root was missed by Jermaine Blackwood at third slip off Roach, the ball racing to the third man boundary. But off the very next delivery the premier batsman opted to offer no shot and the ball angled into the right-hander and moved in just enough to clip the top of off-stump.

Stokes joined Dan Lawrence and the pair looked to be coping well enough to at least survive before Holder, who bowled five consecutive maiden overs in the morning, drew Lawrence into a forward prod for Blackwood to make amends in the slips and give the former captain his first wicket.

Seales ended a promising innings from Stokes with a full-length delivery in the afternoon session while Holder earned an LBW decision against Foakes after tea.

However by then England’s recovery was well and truly underway with Bairstow bringing up a deserved hundred off the part-time bowling of West Indies captain Kraigg Brathwaite and displaying the sort of resolve which appeared to have vanished from English cricket in a desperate Australian campaign.