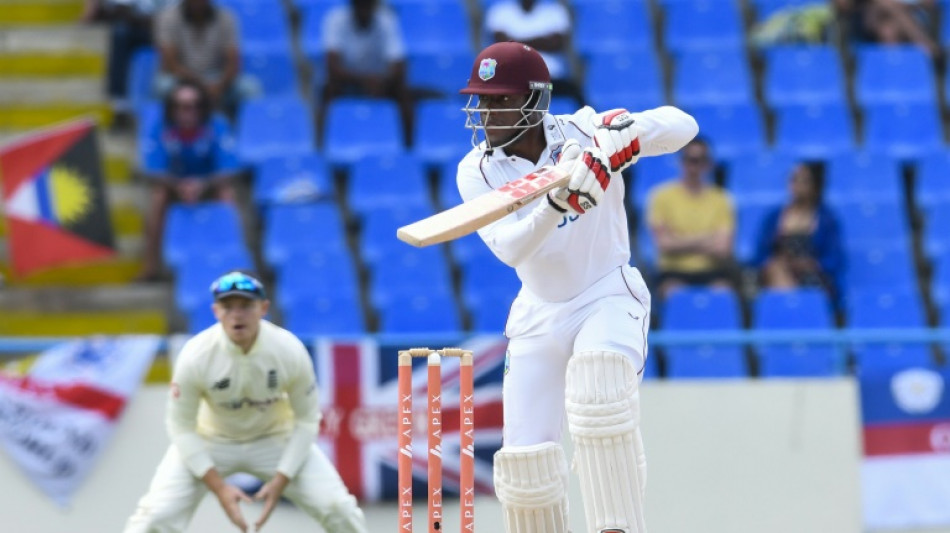 Nkrumah Bonner's watchful defiance took him to a second Test century and edged the West Indies ahead of England on the third day of the first Test at the Sir Vivian Richards Stadium in Antigua on Thursday.

Almost a year from the day his maiden Test century ensured a draw against Sri Lanka at the same venue, Bonner reached three figures again shortly after tea with a sweep off left-arm spinner Jack Leach.

The 33-year-old Jamaican's century featured nine boundaries and a six in an innings which has occupied over six hours.

Shortly after the tea interval the West Indies had moved to 326-7, a first innings lead of 15 runs.

After losing overnight partner Jason Holder at the start of the day to Ben Stokes for a well-played 45, Bonner found another resolute teammate in Joshua da Silva, the wicketkeeper-batsman contributing 32 to a 73-run sixth-wicket partnership until he was trapped leg-before by Leach in the afternoon session.

England's hopes of a small first-innings lead were lifted when Alzarri Joseph's miscued hook off Craig Overton was held by substitute fielder Ollie Pope at long-leg.

However Kemar Roach displayed maturity befitting his seniority in the side as 40 runs were added for the eighth wicket before the bails were lifted for the end of the post-lunch session.

England's hopes were lifted within minutes of the start of play in the morning when Stokes found the edge of Holder's bat to send the former captain back to the pavilion, wicketkeeper Ben Foakes making no mistake with the straightforward catch.

But Bonner continued in his usually phlegmatic manner, looking calm and assured in defying every challenge presented by England's seamers.

He needed more than a little luck against the spin of Leach though, as Zak Crawley failed to hold on to a sharp chance at slip when the batter was on 73.

Da Silva, 10 years Bonner's junior whose Test debut in December of 2020 came less than two months before the older player's first cap, brought his experience as an opening batsman with his club in Trinidad and Tobago to bear in coping effectively with the potential threat of the second new ball.

He was also aided by the television technology as an lbw verdict against him by umpire Joel Wilson off the bowling of Overton was overturned on review, only for Leach to finally bring an end to his defiance shortly after lunch.