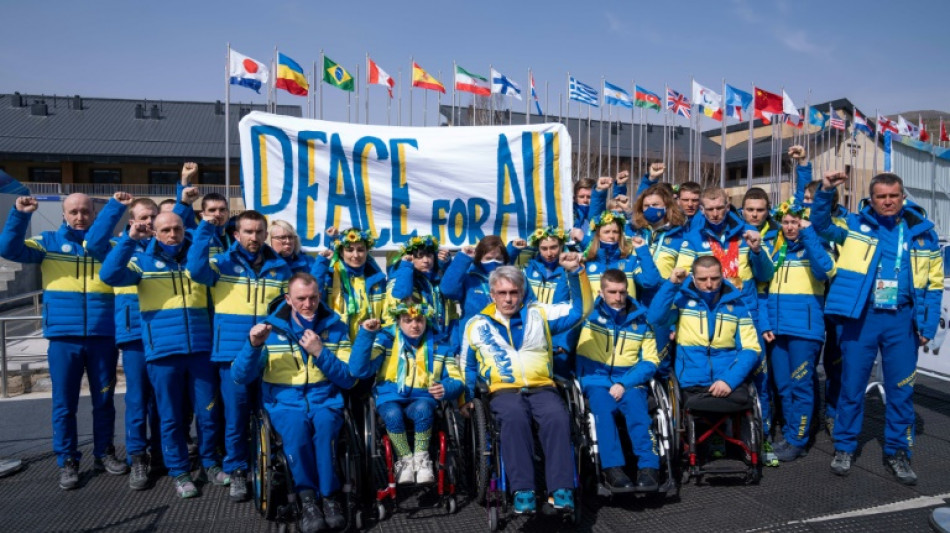 There will be no welcome parade when Ukraine's most successful Winter Paralympics team returns to its war-torn homeland from Beijing -- some members may not even be able to reach their bombed cities.

But after persevering on the slopes and field, the athletes are now vowing to bolster their country's fight for survival with donations, volunteer work and helping loved ones.

The United Nations estimates more than 2.3 million people have fled Ukraine -- the majority to neighbouring Poland -- since Russia invaded more than two weeks ago.

Despite reeling from events back home, Ukraine's Paralympic athletes managed 25 podium finishes in biathlon and cross-country skiing events, including a team record of nine gold, as of Friday afternoon.

They could add to the tally this weekend in cross-country skiing and relay events.

Previously, the country's seven gold at the 2006 Turin Games had been its most successful Winter Paralympic outing.

But while other competitors will head home with sights set on training for the 2026 Games, the Ukrainian athletes face life in a warzone.

Nine members of the team, including the head coach, are from heavily bombed Kharkiv -- and it could be too dangerous to return to that city.

After the closing ceremony on Sunday in Beijing, the team will fly to Istanbul and then have a few days rest in Warsaw before travelling by bus to Ukraine.

Biathlete Pavlo Bal, 35 -- a former airborne soldier who had his legs amputated after an injury in 2017 -- knows it will be a long and tough fight ahead for his country.

"I will be a blood donor and help internally displaced people," he told AFP through an interpreter.

"Maybe I will help with logistics."

His wife and two-year-old son are safe with his brother in a village and although he keeps in touch with frequent video calls he wants to see them in person.

"I cannot wait to get back home and hug my family. I'm looking forward to that the most," he said.

A Ukrainian poem that his mother taught him -- about home being the best place -- has brought him solace while competing in China, he said.

While Bal plans to take up hand-cycling have been disrupted by the conflict, he still hopes to make it to the next Winter Paralympics.

Teammate Grygorii Vovchynskyi, 33, is desperate to be reunited with his 10-year-old daughter, who is staying in a village with his parents.

"I tell her that I love her every day," he said.

Vovchynskyi won gold, silver and bronze in his men's standing biathlon races and a bronze in a cross-country event and aims to lift the spirits of family and friends.

"Those who are sheltering underground, those who are under fire and those who are so afraid when they hear the sirens and run to the basements, I want to tell them that this hour is not for you. This is not your story and this is not how it will end," he said.

He plans to donate clothes and give shelter to people escaping the fighting.

The Ukraine team's grit has won plaudits from fellow athletes and games organisers.

"The fact they are competing here, knowing what is going on in their nation, and are still focused on competition -- it's incredible," he said.

There were always examples of resilience at any Paralympic Games -- but this was next level, Parsons added

"This is beyond what I thought was possible," he said.