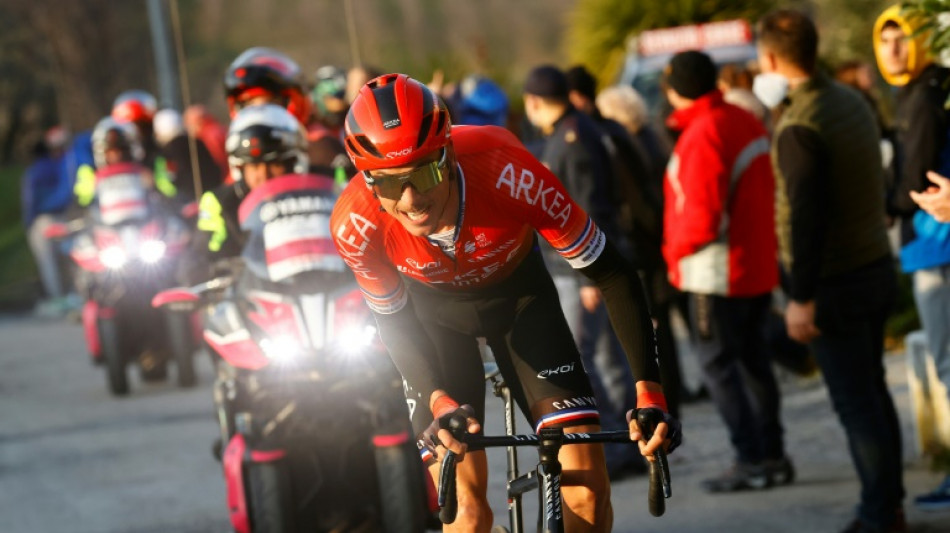 Warren Barguil won Friday's fifth stage of the Tirreno-Adriatico after a late burst into the final, gruelling kilometres of a climb-packed day as Tadej Pogacar held onto the overall lead.

Arkea-Samsic rider Barguil had been part of a break which separated from the peloton 65 kilometres into the short but tough 155km stage between Sefro and Fermo, the first time the seven-day race touched Italy's Adriatic coast.

He crossed the line ahead of Xandro Meurisse, home hope Simone Velasco and Nelson Oliveira, who had tried and failed to catch the Frenchman in the final few hundred metres.

Little changed at the top of the general classification as the main peloton led by Pogacar and pretender Remco Evenepoel came in just under a minute behind.

Evenepoel is nine seconds back heading into the crucial sixth stage, a hard 215km between Apecchio and Carpegna which features steep climbs.

Friday's stage was short with some serious gradients testing out the peloton, in particular as the stage wound to its end.

Going into the final 20km of an undulating stage a breakaway group which had already been out in front for the best part of 40km was whittled down to seven with Cofidis' Benjamin Thomas out in front alongside Barguil.

The peloton containing all of the biggest names was over two minutes behind with a punishing terrain, including a 21-percent, 750-metre "wall" climb right before the finish, lying ahead of them and seemingly few opportunities to attack.

Regardless Evenepoel attacked to go and was immediately followed by Pogacar and two others, but just as the gap to the race leaders was closed to a minute with 6.5km to go they briefly went the wrong way at a fork in the road, costing them their attack.

Barguil then made his own push for the stage win and looked unflustered as he took the plaudits for an impressive win, his first major international victory since claiming two jerseys at the 2017 Tour de France.