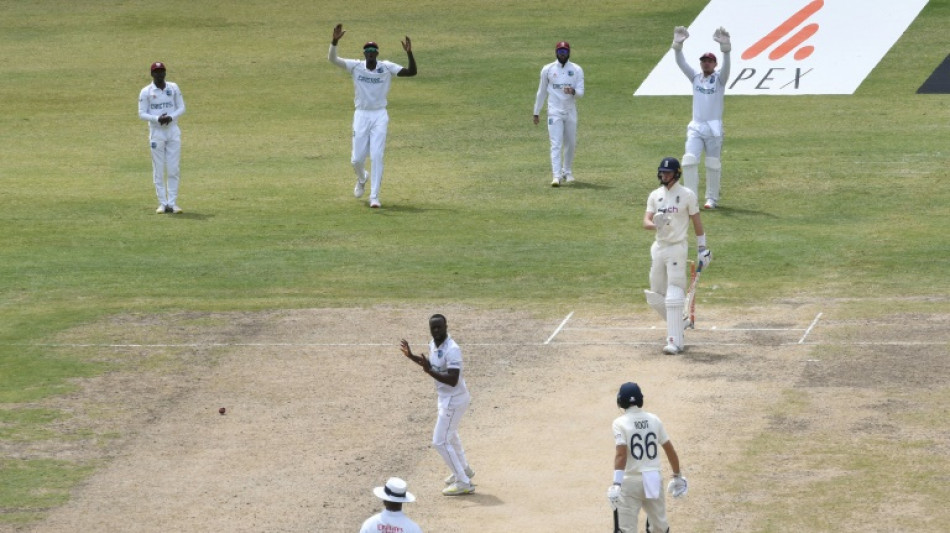 Zak Crawley and Joe Root made the most of a benign pitch and uninspired West Indies bowling to compile unbeaten half-centuries, taking England through a rain-shortened afternoon session to be 146 for one at tea, ahead by 82 runs, on the fourth day of the first Test on Friday.

Crawley's 79 not out was embellished with 11 boundaries off 156 deliveries while his captain's contribution so far of 55 undefeated has been highlighted by four fours off 114 balls.

Having lost opening batsman Alex Lees cheaply to Kemar Roach before lunch for the second time in the match, the tourists were mindful of the need to avoid any additional alarms.

The second-wicket partnership between Crawley and his captain, worth 122 going into the final session, underscored the relative ease for capable batsmen to accumulate runs at their leisure in these conditions.

Root came to the crease after Lees again failed to impress on his Test debut, the left-hander once more being undone by a full-length delivery from Roach which trapped him leg-before for six in the sixth over of the innings.

Crawley had survived a moment of anxiety a couple overs earlier when he was ruled lbw by umpire Gregory Brathwaite.

However the batsman's challenge of the on-field verdict proved correct.

Kept in the field all day on a turgid third day by the West Indies who advanced their first innings by 171 runs off 90.1 overs, England needed just three deliveries to claim the final wicket on the fourth morning.

Last man Jayden Seales was trapped leg-before by Jack Leach, giving the left-arm spinner his second wicket of the innings after 43.3 overs of toil.

West Indies' first innings total of 375, and a lead of 64, represented an excellent recovery from the discomfort of 127 for four on the second afternoon.

That was due primarily to a patient second Test century from Nkrumah Bonner, who occupied the crease for over nine hours in accumulating 123 before he was the ninth wicket to fall late on the third day.