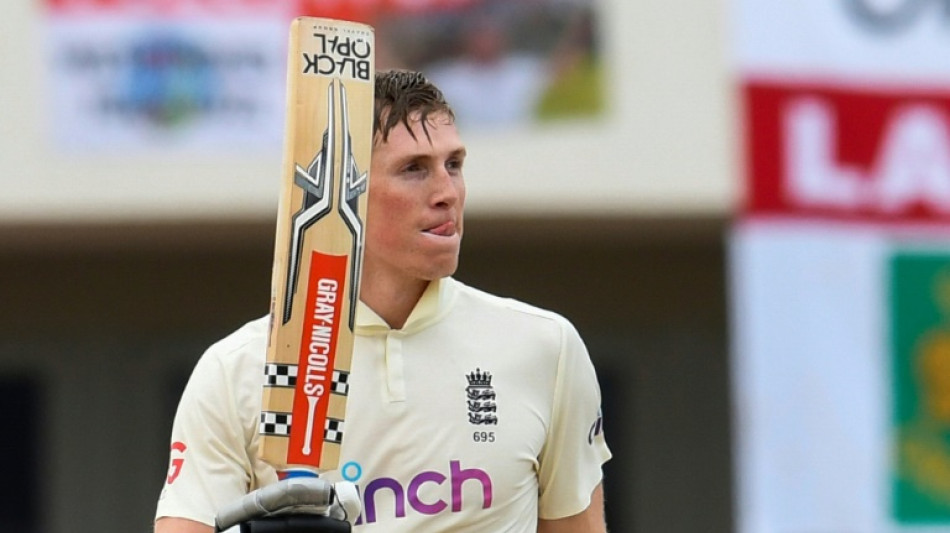 Zak Crawley's undefeated second Test century and a composed, unbeaten 84 by skipper Joe Root pushed England towards safety at 217 for one in their second innings on a rain-shortened fourth day of the first Test at the Sir Vivian Richards Stadium in Antigua on Friday.

Having trailed by 64 runs at the start of the innings, the tourists ended the day ahead by 153 and with nine wickets in hand.

They may entertain the thought of trying to force victory on the final day although the benign nature of the pitch suggests a tame draw is almost inevitable.

Crawley's 117 not out at the top of the order was an innings of undeniable quality though, whatever the conditions.

Upright and elegant, the right-hander's first three-figure Test knock for almost two years came off exactly 200 deliveries and was decorated by 16 fours.

His second-wicket partnership with Root has so far realised 193 runs with the captain looking completely at ease without being ultra-aggressive.

He seems destined to add to his tally of 23 Test hundreds via an innings that has so far occupied 158 deliveries in which he stroked six boundaries.

"Root's got such a calm head," said Crawley.

"He was telling me to just keep concentrating because they were bowling really well at times. He is such a calm individual and I took a lot from him during the course of the day."

Notwithstanding the nature of the pitch and expectation of a last-day stalemate, Crawley remains hopeful of some unexpected drama.

"It's definitely still a good wicket. It hasn't broken up as much as we thought it would," he acknowledged.

"But we're still hoping it's going to break up quite a bit tomorrow and give us a good chance of bowling them out."

When Crawley lost opening partner Alex Lees cheaply to Kemar Roach before lunch for the second time in the match, the tourists would have been decidedly uncomfortable, given the top-order frailties which were exposed in the first innings.

Roach thought he had removed Crawley for a duck prior to Lees' demise as umpire Gregory Brathwaite ruled the opener leg-before to a full-length delivery.

However the batsman immediately reviewed the decision and was vindicated with television replays showing the ball missing the stumps by some distance.

Whether or not the newcomer Lees gets another opportunity in the second Test in Barbados in five days' time remains to be seen but the left-hander certainly appeared to have obvious technical deficiencies, especially to Roach's line of attack.

Root's arrival though changed the complexion of the innings from one of vulnerability to growing assurance.

Nothing typified the placid playing surface more than Roach, who is normally a sharp fast-medium at his best, asking wicketkeeper Joshua da Silva to stand up to the stumps during a spell in mid-afternoon when the batsmen were advancing down the pitch to him.

Even Nkrumah Bonner was given an opportunity to toss up a few of his part-time wrist-spinners just before a final heavy shower put paid the prospects of any more play in the last session of the day.

Kept in the field all day on a turgid third day by the West Indies who advanced their first innings by 171 runs off 90.1 overs, England needed just three deliveries to claim the final wicket on the fourth morning.

Last man Jayden Seales was trapped leg-before by Jack Leach, giving the left-arm spinner his second wicket of the innings after 43.3 overs of toil.

West Indies' first innings total of 375 represented an excellent recovery from the discomfort of 127 for four on the second afternoon and was due primarily to a patient second Test century from Bonner, who occupied the crease for over nine hours in accumulating 123 before he was the ninth wicket to fall late on the third day.