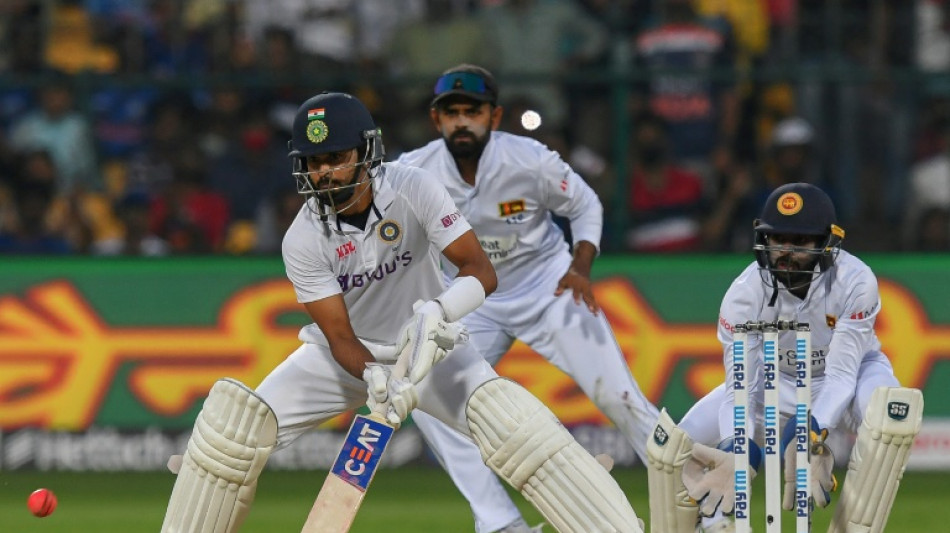 India's Shreyas Iyer clawed back against Sri Lanka's spin onslaught to make 92 with the hosts all out at 252 by dinner in Saturday's pink ball Test.

Iyer missed a century after being stumped off Praveen Jayawickrama as India's innings folded in an extended second session as evening fell in Bangalore.

But he helped claw back a respectable total after Sri Lanka steamrolled the top order, leaving the hosts a worrying 86-4 -- with skipper Rohit Sharma and Virat Kohli both back in the pavilion -- before tea.

Iyer put on key partnerships including a 40-run fifth-wicket stand with Rishabh Pant, who made 39, and raised his second Test fifty to take the attack to the opposition.

The left-handed Pant attempted to hit back after the top-order wobble as he smashed seven fours in his 26-ball stay before falling to Embuldeniya after tea.

Iyer, who survived dropped catches on 50 and 82, soon took over and finished with 10 fours and four sixes in his 98-ball knock.

Earlier Kohli put on 47 runs for the third wicket with Hanuma Vihari as the pair attempted to rebuild the innings from 29-2.

Jayawickrama broke the stand after sending back Vihari for 31 and Dhananjaya de Silva got Kohli trapped lbw in the next over to put India in trouble.

Kohli walked on to a rousing welcome by the crowd at M Chinnaswamy Stadium -- home to his Royal Challengers Bangalore team -- but was stunned by his dismissal.

Mayank Agarwal was run out after a mix up with Rohit in the second over of the day.

Rohit hit a six to signal his intent but fell to Embuldeniya after making just 15.