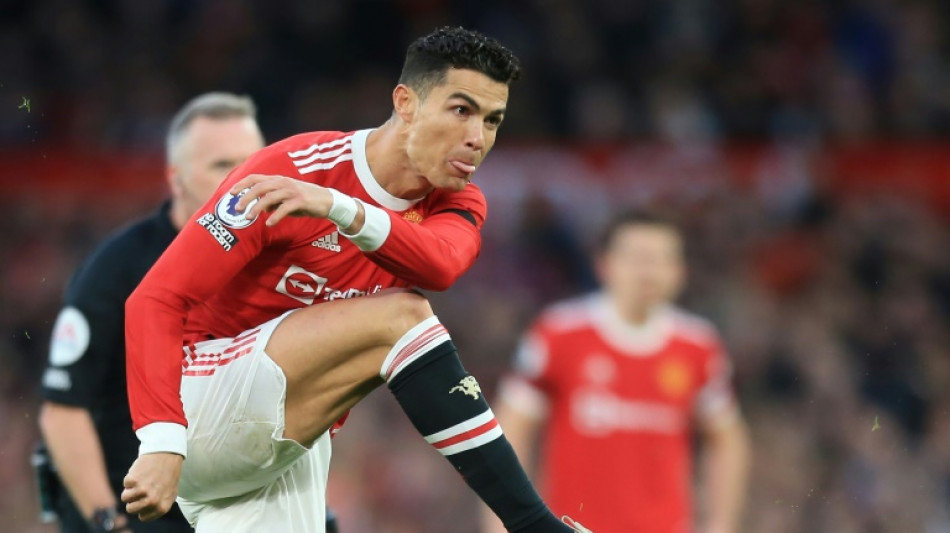 Cristiano Ronaldo set another goalscoring record in a return to form with a hat-trick to keep Manchester United's chances of playing in the Champions League next season alive with a 3-2 win over Tottenham on Saturday.

Ronaldo had scored just once in his previous 10 games, but three fantastic finishes took him clear as the highest scorer in professional men's football history according to FIFA's records with 807 goals for club and country.

Victory lifts United back into fourth, although they are just two points ahead of Arsenal who have four games in hand.

A fifth defeat in eight league games is another blow to Tottenham's hopes of a top-four finish as they remain seventh, now five points behind United.

Ronaldo's second spell at Old Trafford has so far proven to be an anti-climax with his poor form sparking debate over whether the 37-year-old's powers are waning.

The five-time Ballon d'Or winner missed United's thrashing in the Manchester derby last weekend and was criticised for a perceived lack of commitment as he jetted off to Portugal to rehab a hip injury rather than watch his teammates lost 4-1 at the Etihad.

He was restored to Ralf Rangnick's starting line-up as one of five changes from that damaging defeat with Bruno Fernandes the notable absentee due to illness.

It took just 12 minutes for Ronaldo to make his mark with a stunning strike into the top corner from outside the box.

However, United failed to build on the early goal and were instead forced back in a familiar pattern to previous home games this season against stronger opposition.

Spurs quickly had the ball in the net in response only for Ben Davies to be flagged offside before Eric Dier's header from a corner was cleared off the line.

A Tottenham equaliser seemed only a matter of time and was gifted to them when Alex Telles handled Dejan Kulusevski's cross for a clear penalty.

Harry Kane smashed home the resulting spot-kick to continue his fine form for his sixth goal in as many games.

Within three minutes, though, United were back in front thanks to a landmark goal for Ronaldo.

United's defensive deficiencies meant Ronaldo's work was not done to win the game as Spurs enjoyed the better of the second half.

When a second equaliser did arrive for Antonio Conte's men it was thanks to more misery for United captain Harry Maguire.

Consistent errors from the England international have played a huge part in his side's struggles this season and he turned into his own net from Sergio Reguilon's cross.

Conte screamed for focus from his side on the sideline, but they succumbed again to Ronaldo's predatory instincts.

The United number seven rose highest to meet Telles' corner nine minutes from time to power a header into the top corner for just his second United hat-trick and first since returning to Old Trafford in August.