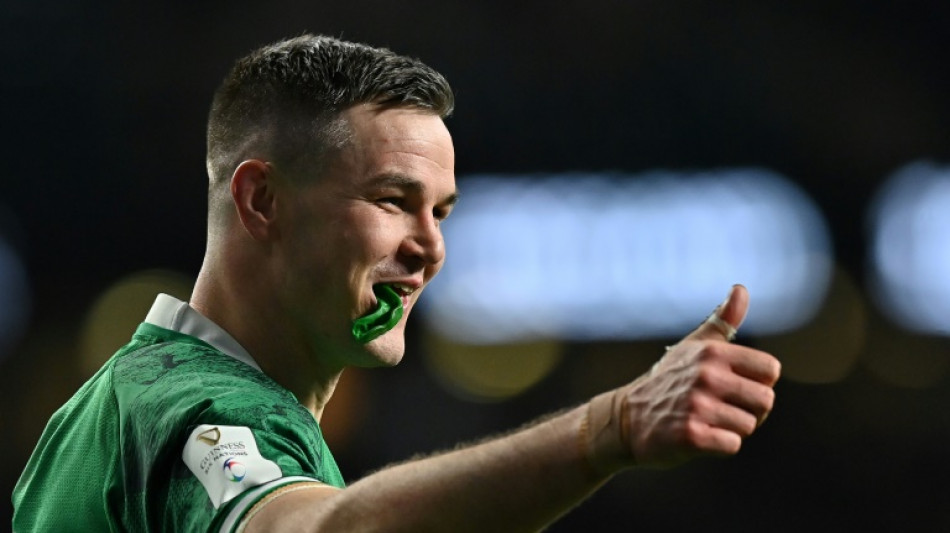 Ireland captain Johnny Sexton was glad to see his side "stay alive" in the Six Nations title race after a gruelling 32-15 win over 14-man England at Twickenham on Saturday.

England had to play nearly the whole match a man down, with lock Charlie Ewels shown a red card after just 82 seconds -- the quickest sending-off in Championship history -- for a dangerous head-on-head clash with Ireland second row James Ryan.

Even so, England were level at 15-15 with 20 minutes left thanks to five Marcus Smith penalties that arose from their scrum dominance.

But Ireland, despite some heroic England defence, eventually pulled clear thanks to two late tries from replacements Jack Conan and Finlay Bealham after James Lowe and Hugo Keenan had crossed the Red Rose line in the first half.

Victory left Ireland, who've now won three of their four matches this Six Nations, second in the table and hoping England derail France's bid for a Grand Slam in Paris during next weekend's final round of matches.

If France do slip up, Ireland could clinch the title and a Triple Crown against Scotland in Dublin.

"We'd have been so happy to be told beforehand, we’d get five points and stay alive in the Championship," veteran fly-half Sexton told reporters.

"Two years ago we would have lost that game.

"We wouldn't have the composure to regroup, this week we prepared and the mental resilience stuff we have put in has helped," the 36-year-old British and Irish Lions fly-half added.

England's second defeat of the tournament, following an opening day 20-17 loss to Scotland, scuppered their title hopes but coach Eddie Jones was proud of his side's fortitude.

"It was 15-15 and we were controlling the game and we just made a couple of mistakes that allowed them into the game," he said after a match where England prop Kyle Sinckler was concussed and flanker Tom Curry ruled out of the France game with what appeared to be a hamstring injury.

Jones had no complaints about Ewels' early exit, saying: "It was a genuine attempt to make a good tackle but his head was just in the wrong spot and we have got no questions about the red card."

But he criticised French referee Mathieu Raynal for failing to give England complete reward for their scrum dominance.

"I am a bit disappointed the referee didn't allow us to scrum fully," the Australian said.

"That would be my only complaint...We got four scrum penalties and there was no sign of a yellow card.

"If World Rugby want to have the scrum in the game they have got to allow the strong scrums to dominate."

Nevertheless, Jones was buoyed by England's display ahead of next year's World Cup in France.

"It was a great learning experience for this team. I see that as a foundation game for us where we set our campaign for the World Cup in 2023," he said.

"There were 82,000 people there that loved seeing the spirit of this team."