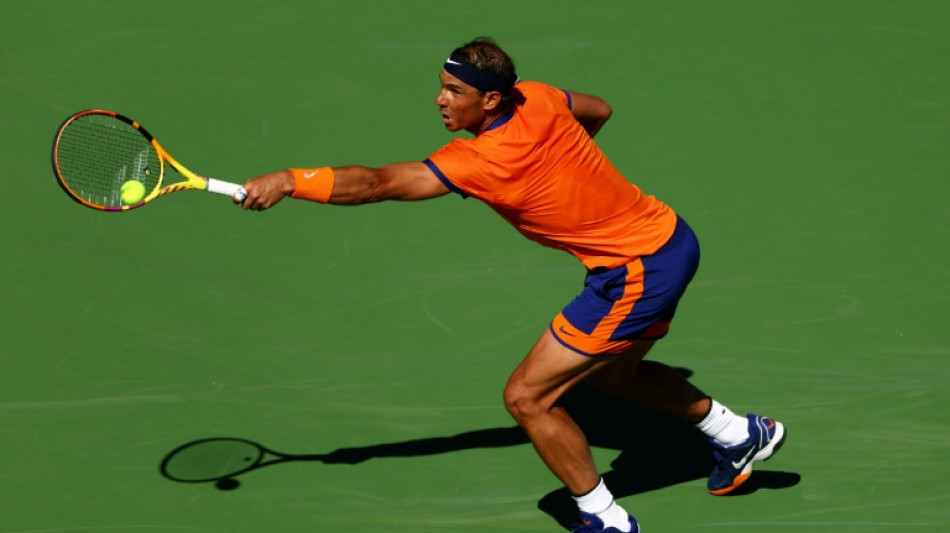 Nadal ekes out Indian Wells win as No. 1 Medvedev cruises

Rafael Nadal pulled off another great escape Saturday, rallying from two breaks down in the third set to beat young American Sebastian Korda in the second round at Indian Wells.

As newly minuted number one Daniil Medvedev -- the man Nadal beat with an epic comeback in the Australian Open final -- cruised to victory in his first match as the world's top-ranked player, Nadal was made to work by 21-year-old Korda, ranked 38th in the world.

"Sebastian was playing some fantastic tennis. I didn't play my best match without a doubt (but) a lot of credit to him that he played so aggressive and he put me in a lot of trouble."

Medvedev opened the action on Stadium court in the California desert and after saving a break point in the opening game had little trouble with 21-year-old Czech qualifier Tomas Machac, ranked 158th in the world.

The reigning US Open champion wrapped up a 6-3, 6-2 victory in 70 minutes, although Medvedev said it "was not as easy as it seems" after he sealed the win on a third match point.

The difference, he said, was consistency.

"If you look, the first set was pretty even. He made just a few unforced errors and maybe some bad decisions in crucial moments. That's how tennis is sometimes," Medvedev said.

Medvedev said it was a "great feeling" to take the court as world number one, "something I've always dreamed of."

But he'll have to reach the quarter-finals to prevent Novak Djokovic, absent this week due to US Covid-19 travel restrictions on the unvaccinated, from reclaiming the top spot.

Medvedev, who has never made it past the fourth round in four prior appearances, next faces France's Gael Monfils, who beat Serbian Filip Krajinovic 6-3, 6-4.

Medvedev said he would focus on playing well and winning matches and let the ranking take care of itself.

"The more tournaments you win, the more points you gain, the more chances you have to stay at this No. 1 spot for more weeks, more time," he said. "I'm happy about (the ranking), but I'm also trying to continue working and playing good."

Although he's not in the hunt for No. 1, Nadal has been the hottest player on the ATP Tour this year. He improved his perfect 2022 record to 16-0 with a gritty victory that owed more to experience and determination than spectacular play.

Korda led the third set 5-2 and twice served for the match. But he couldn't conjure a match point as Nadal reeled off four games in a row as they went to a tiebreaker.

"I think it's true that probably he got a little bit more nervous," Nadal said. "He made some more mistakes.

"He made a couple mistakes and I was able to save myself," added Nadal, who next plays Britain's Daniel Evans, a 6-2, 6-0 winner over Argentina's Federico Coria.

Nadal was joined in the third round by rising young compatriot Carlos Alcaraz, who beat American Mackenzie McDonald 6-3, 6-3.

The 18-year-old Alcaraz, coming off a title at the Rio Open, converted five of his nine break chances and rallied from a break down in the second set to seal the win.

Sabalenka was seeded second in a tournament missing both world number one Ashleigh Barty and second-ranked Barbora Krejcikova.

She started brightly against the 46th-ranked Italian, but Paolini was able to capitalize on her struggles on serve that included 10 double faults.

"After the first set I didn't expect to win the match," Paolini admitted. "But I tried just to be there every point, to not think about the score.

"I mean, I wasn't even close to her, but then point by point I started to believe it."