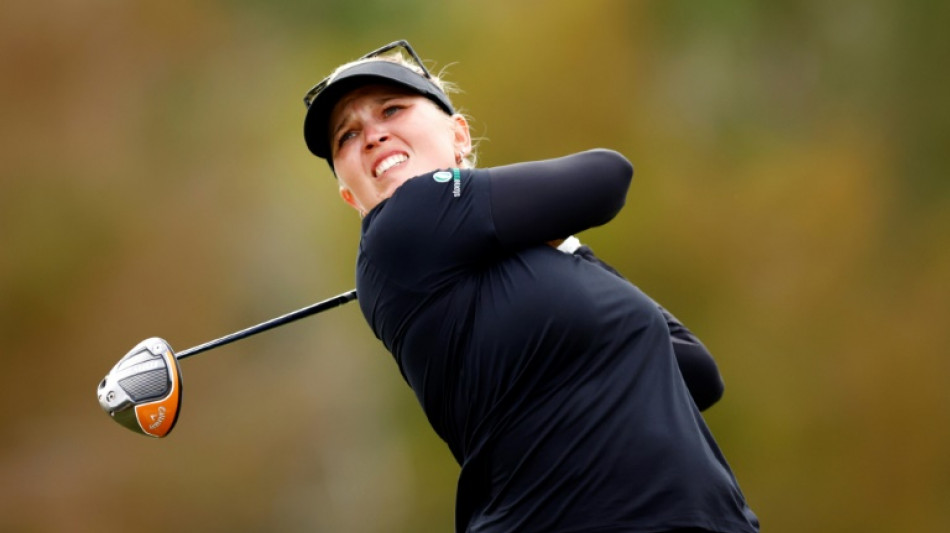 A tense playoff between Lin Xiyu and Nanna Koerstz Madsen brought the final round of LPGA Thailand to a spectacular close with the Danish player snatching victory on Sunday.

Koerstz Madsen became the first player from Denmark to win the LPGA title, taking home the tournament's $240,000 prize at the Siam Country Club.

The two-time Olympian bolted out of the gates on her final round with an eagle before ending on 67 -- and chalked up a tournament record in the process.

"It was fun. I really tried to enjoy the moment. Standing now with the trophy it was even more fun," she said.

Towards the end of the front nine the 27-year-old began to wobble, chalking up one bogey at the seventh hole and then another two at the sixteenth and final.

But she triumphed in the end, sweating through hot conditions and play disrupted by lightning, to sink another eagle in the playoffs for the win.

"A little bummed on 18, the ordinary play was not very fun," Koerstz Madsen said, before adding: "But now it's great."

Her win is sweet vindication after taking the lead previously in the final round at 2021 AIG Women's Open only to lose out with a double bogey at the end.

"I think I have more confidence with my game and myself. I believe that I can win out here, so that's just what I have been chasing for the last year," she said.

Lin, who ended the final round with a 66 after chasing Koerstz Madsen for the day, just missed chipping the ball in with a 58 club on the first playoff pin.

"I just cannot believe that chip didn't go in. But, I mean, I'm pretty proud of myself," said the 26-year-old player.

Having shot 26-under for the tournament, she expressed sadness that she wasn't able to take home the trophy.

"Sometimes it's just weird," she said, "But that's my lowest ever shot in a tournament week, and like four days of very solid golf."

Celine Boutier took third, finishing on 67 with a magnificent eagle on the eighteenth pin.

"When I made contact I knew it was like a good shot and I knew I had a chance, but having it go in is definitely a bonus," she said.

The French player added while she was happy with her third-place finish, having the crowds roar her home was a bonus.

"I was already pretty happy that they were allowing some spectators, and then just having a nice finish on 18 is definitely making the week a little bit sweeter."