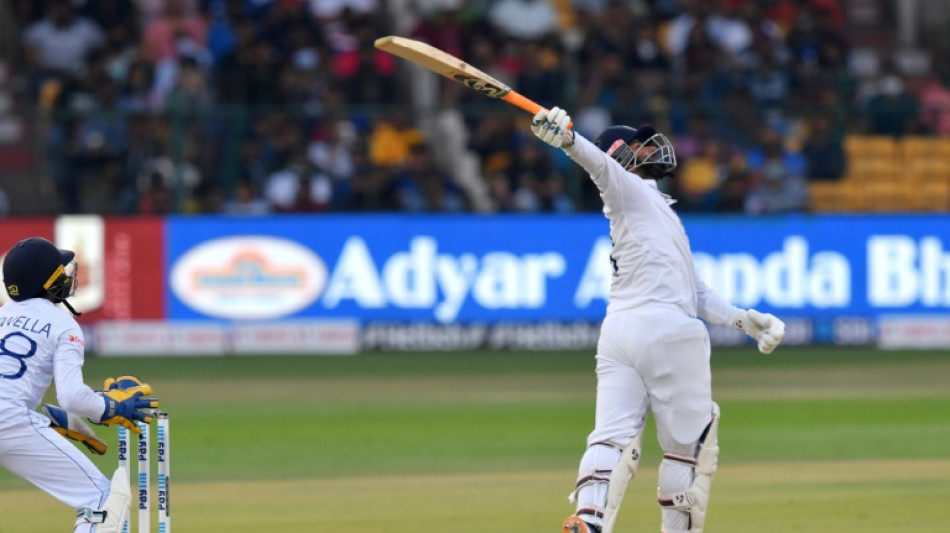 Wicketkeeper-batsman Rishabh Pant hit a quickfire half-ton as India extended its second innings lead to a mammoth 342 on day two of the pink ball Test on Sunday.

The hosts reached 199 for five at dinner -- the second session break in the day-night Test -- in a fast-moving match in Bangalore.

Fast bowler Jasprit Bumrah completed a five-wicket haul in the first session to bowl out Sri Lanka for 109 in response to India's first innings total of 252.

Shreyas Iyer, on 18, and Ravindra Jadeja, on 10, were at the crease after India lost half the side, including skipper Rohit Sharma for 46 and Virat Kohli for 13.

The left-handed Pant raised his fifty in 28 balls -- a Test record for Indian batsmen -- but soon got caught and bowled to left-arm spinner Praveen Jayawickrama, who has taken three wickets so far.

Rohit, who used his sweep and reverse sweep to good effect against the spinners, missed out on his fifty after being caught at long on while attempting a big hit off Dhananjaya de Silva.

He walked back as a huge roar erupted from a crowd welcoming Kohli, a former captain and star player for the local Royal Challengers Bangalore IPL team.

But Kohli -- who has not scored an international century since India's first ever day-night Test in November 2019, and made 23 in the first innings -- did not last long as he fell lbw to Jayawickrama.

The star batsman's Test average has fallen below 50 for the first time since 2017 and he has gone without a century for 73 international innings.

In the morning, Sri Lanka, who were already struggling after resuming at 86-6, were dismissed inside half an hour during the first session to concede a lead of 143.

Bumrah added two more to his first day's tally of three wickets to bag his eighth five-wicket haul in 29 Tests and first on home soil.