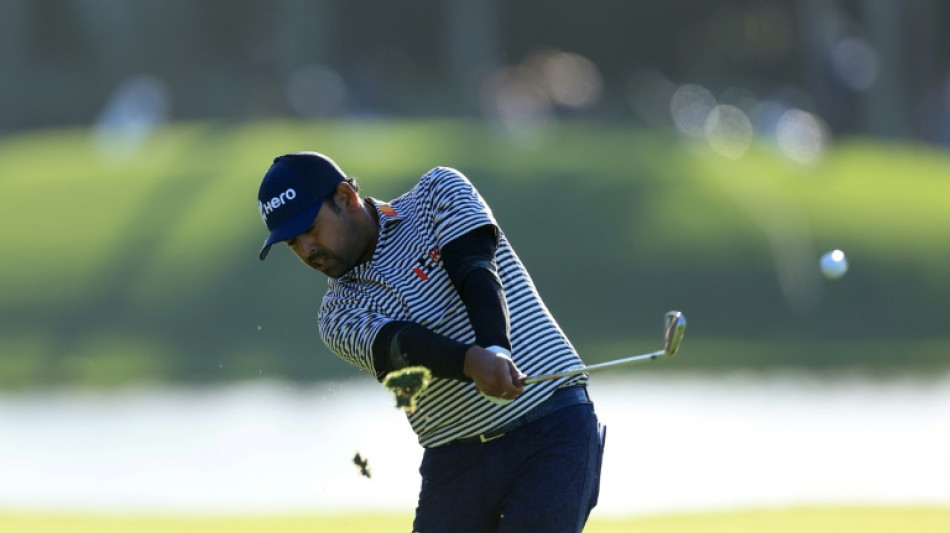 India's Lahiri grabs lead at Players ahead of Monday finish

India's Anirban Lahiri birdied three of his last four holes to seize a one-stroke lead before darkness halted Sunday's third round of the storm-hit Players Championship.

Lahiri made six birdies against a lone bogey to reach 5-under through 11 holes at TPC Sawgrass and stand on 9-under overall, one stroke ahead of Americans Tom Hoge and Harold Varner entering a Monday shootout at Ponte Vedra Beach, Florida.

"I'm just being in the moment right now. I'm really happy. I'm confident," Lahiri said. "You grind away, keep chipping away, keep working on your game, and when it clicks, it clicks."

Two days of torrential rain followed by fierce winds on Saturday delayed play so some golfers must go 27 holes on Monday to finish the tournament.

Lahiri, 34, seeks his biggest career title after European Tour victories in 2015 at the Malaysian and Indian Opens.

"It definitely would be a career highlight," Lahiri said. "This is the next thing to winning a major."

World number 322 Lahiri seeks his first US PGA title and the first by any India player since Arjun Atwal's 2010 triumph at Greensboro. He said it would mean a lot to his homeland because people could watch it there.

Varner seeks his first US PGA title while Hoge captured his first only last month at Pebble Beach. Each has nine holes remaining in round three.

"I'm not used to playing in temps like that. I couldn't feel anything in my fingers, my toes," Lahiri said. "Felt like I made good swings but they came out sideways and I missed a few putts.

"It kind of warmed up a little bit and I got a hold of what I wanted to do on the greens. Just making the three on 11 kind of gave me the momentum I needed to turn my day around."

Lahiri found the left trees off the 10th tee and made a bogey to start the back nine, but bounced back with a tap-in birdie at 11, making him the man to beat with nine rivals lurking three or less back.

"I feel like I'm swinging well," Lahiri said. "I've got to pull the right clubs, make the right shots and just hit it.

There's going to be lot of fiddly shots, a lot of uncomfortable shots and I've just got to commit.

"The few bad shots I hit today was either a bad club that I pulled or a shot I wasn't committed."

England's Paul Casey, sharing fourth on 7-under through nine holes with American Sam Burns and Colombia's Sebastian Munoz, would be the second-oldest Players champion at 44. He has gone 42 holes without a bogey.

"We started in the dark and got home in the dark. But in between I played some pretty good stuff," Casey said. "I've got momentum."

Ireland's Shane Lowry aced the famed par-3 17th island hole with a wedge from 124 yards in round three. It was the 10th ace at the hole, the first since Ryan Moore in the first round in 2019 and was the Irishman's second PGA Tour ace after one at the 2016 Masters.