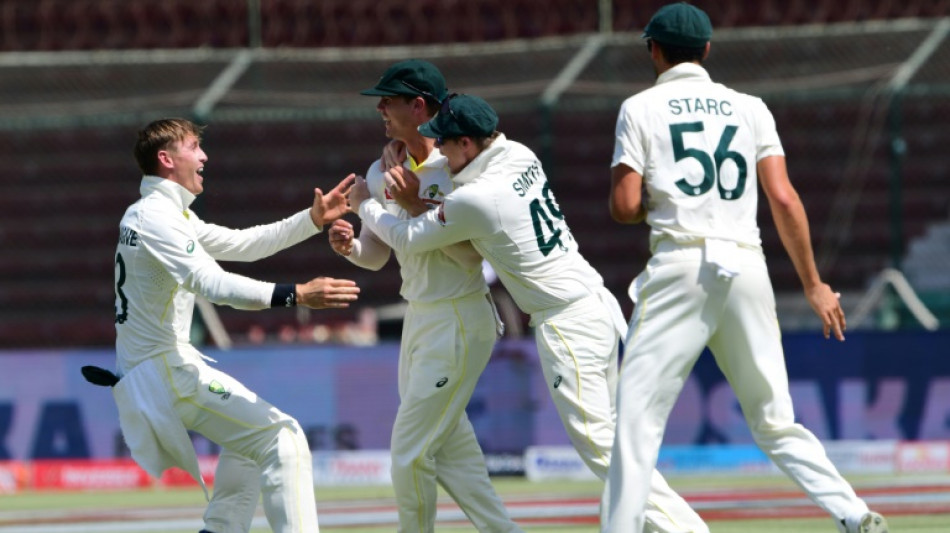 Opener Abdullah Shafique was run out as Pakistan reached 38-1 at lunch on the third day of the second Test in Karachi in reply to Australia's mammoth 556-9 declared.

Imam-ul-Haq was unbeaten on 20 and Azhar Ali four with Pakistan still needing 319 more runs to avoid the follow-on.

Shafique, who hit a brilliant unbeaten century in the drawn first Test in Rawalpindi, had made 13 of Pakistan's 26-run opening stand when he failed to beat debutant Mitchell Swepson's direct throw from point after being called for a sharp single.

Pakistan look to have a daunting task to save the match with the National Cricket Stadium pitch starting to keep low and cracks opening that will aid Australia's two-pronged spin attack of Swepson and Nathan Lyon.

Australia resumed the third day on 505-8 as captain Pat Cummins opted to bat on.

Pakistan struck with the second ball of the day when fast bowler Shaheen Shah Afridi had Mitchell Starc caught at cover by Azhar without adding to his overnight 28.

But that was all the success they had as Cummins, who finished on 34 not out, added a brisk 51 for the ninth wicket with Swepson (15) before declaring.

Pakistan had been forced to toil for 189 overs in the field with seven bowlers used.

All-rounder Faheem Ashraf was the pick of the attack with his 2-55 from 21 overs, while off-spinner Sajid Khan took 2-167 from 57 overs.

Australia are on their first tour of Pakistan since 1998, having previously refused to tour on security reasons.