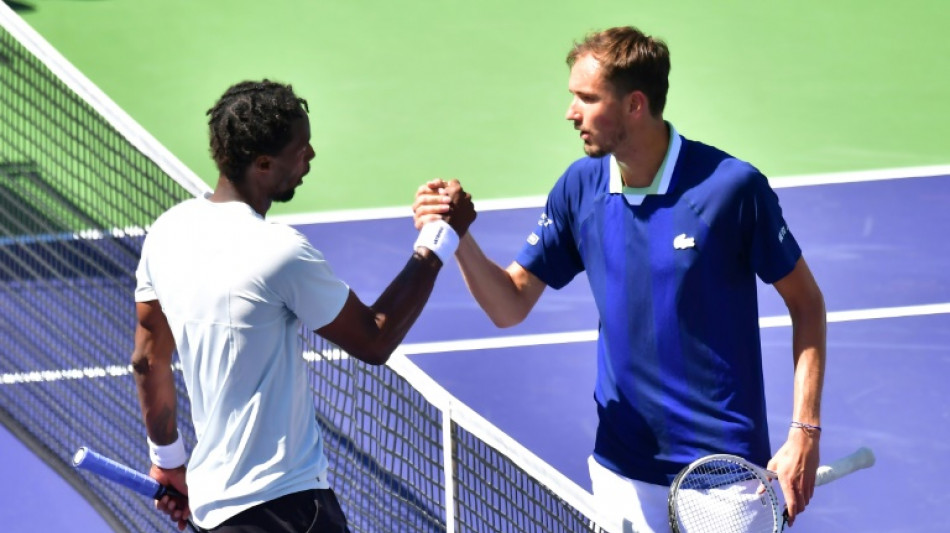 Medvedev upset by Monfils at Indian Wells, loses No.1 ranking

Daniil Medvedev was sent crashing out of the ATP/WTA Indian Wells Masters in a stunning defeat to Gael Monfils on Monday that ended the Russian's three-week reign as world number one.

French world number 28 Monfils produced a vintage performance to down Medvedev 4-6, 6-3, 6-1 in just over two hours to advance to the fourth round.

It was the first time the 35-year-old Monfils has beaten a player ranked world number one since 2009.

The defeat means Novak Djokovic will return to the top of the world rankings, three weeks after Medvedev took top spot on February 28.

Monfils sealed victory in 2hr 6min after converting his sixth match point in brilliant sunshine at the Indian Wells Tennis Garden in the California desert.

The veteran Frenchman thumped his chest and pointed at his Ukrainian wife Elina Svitolina in the stands following a superb performance.

"I'm in my zone and I'm a tough opponent for anyone. It's been a long time since I've beaten a world number one, so I'm pretty happy."

Reigning US Open champion Medvedev had looked to be in control after clinically taking the first set immediately after breaking Monfils for a 5-4 lead.

Monfils broke early for a 3-1 lead in the second set, but Medvedev broke back to level at 3-3.

Monfils earned set point in the eighth game with a brilliant backhand up the line before clinching the second set with a cheeky underarm serve.

Medvedev's composure evaporated in the deciding set, with the Russian earning a code violation for smashing his racket in frustration after being broken in the first game.

Monfils held and then went a double break up before holding again for a 4-0 lead.

With the next two games going on serve, Medvedev was soon in trouble in the seventh game, going 0-40 and three match-points down after blasting an overhead smash long.

The Russian did well to claw back those three match points, and saved two more before Monfils finally converted his sixth.

Medvedev meanwhile vowed to reclaim his No.1 ranking at the Miami Open next week.

"Now I know I'm going to lose it (the ranking), so I have Miami to try to get it back," Medvedev said.

"Usually feeling a little bit better in Miami in terms of tennis, so we'll try to play good there.

"When I play my best tennis, my good tennis, it's really tough to beat me. But that's the toughest part of tennis is to reproduce it time after time."

Monfils, the 26th seed, will face rising Spanish star Carlos Alcaraz in the fourth round.

Alcaraz, seeded 19, advanced to the last 16 with a confident 6-2, 6-0 demolition of compatriot Roberto Bautista Agut, the 15th seed.

As Medvedev was left reflecting on an early exit, Spanish star Rafael Nadal's unbeaten start to 2022 continued with a straight sets defeat of Britain's Dan Evans.

Nadal will play either Reilly Opelka or Denis Shapovalov in the last 16.

In the women's singles on Monday, Russia's Veronika Kudermetova advanced to the last 16 after her Czech opponent retired in the second set. Kudermetova was 6-4, 0-2 ahead when her opponent conceded defeat.

Sakkari booked her place in the fourth round with a 6-3, 6-0 win over the two-time Wimbledon champion.