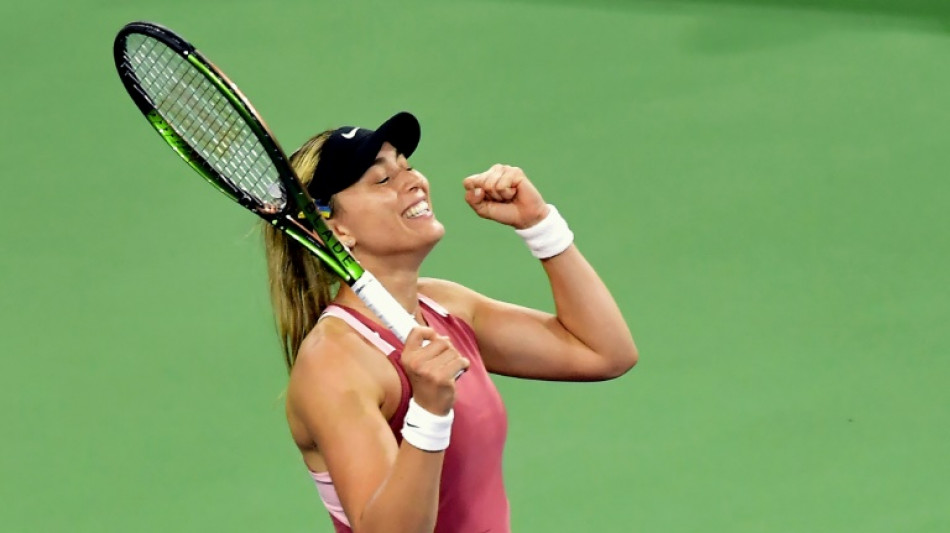 "Today was very tough," said Badosa, who lifted the trophy last October in a tournament moved from its usual March date because of the coronavirus pandemic.

"Leylah is an amazing player, very fast and good timing. I knew I had to fight and serve very well. I think I did that the entire match."

Badosa is vying to become the first woman to win back-to-back Indian Wells titles since Martina Navratilova in 1990-91.

She gained the upper hand in the second set with a break for 3-2, then saved a pair of break points in the eighth game to take a 5-3 lead.

Swiatek, the 2020 French Open champion, is coming off a title in Doha last month, but the 20-year-old admitted it took her a while to figure out how to tackle Kerber - another former Grand Slam champion.

"Truth be told, I wasn't really sure what my tactics should be, if I should be more aggressive or play more patient game," Swiatek said. "But at the end I think I made the right decision in right time, in right moments of the match."

She said Kerber showed her a different game than she'd expected after practising with the German.

"I felt like she wanted to use her experience and kind of trick me," Swiatek said.

Former world number one Simona Halep of Romania, seeded 24th, swept into the quarter-finals with a 6-1, 6-4 victory over 26th-seeded compatriot Sorana Cirstea.

Halep, a two-time Grand Slam champion is in the quarters for the fifth time at Indian Wells, where she lifted the trophy in 2015.

Halep will play Petra Martic for a place in the semi-finals. Croatia's Martic beat Liudmila Samsonova 7-6 (8/6), 6-4.

Sixth-seeded Maria Sakkari of Greece advanced with a victory over Australian qualifier Daria Saville, who was trailing 4-1 when she retired with a left thigh injury.

The 25-year-old Italian Berrettini, winner of five ATP titles but seeking his first Masters 1000 crown, is the second-highest ranked man left in the draw behind fourth-seeded Rafael Nadal.

But he admitted he'll need to do better after a victory in which he trailed 4-1 in the second set.

"I got a little bit nervous," he said. "I didn't like how I handled the start of the second set. I let the anger out a little bit, which helped."

Rublev, who has captured titles in Marseille and Dubai this year, pushed his ATP match winning streak to 11 with a 6-3, 6-4 victory over Tiafoe.

Isner is one of four US men into the last 16 along Taylor Fritz, Jenson Brooksby and Reilly Opelka -- who will take on Nadal on Wednesday.