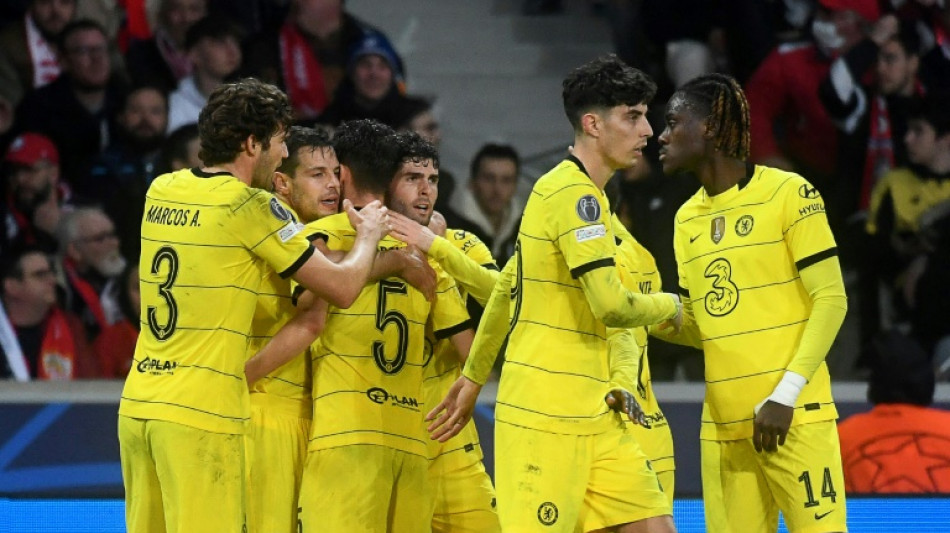 Chelsea put their off-field troubles to one side to seal a place in the Champions League quarter-finals on Wednesday as a Cesar Azpilicueta goal clinched a 2-1 win at Lille in the second leg of their last-16 tie, and a 4-1 aggregate victory.

Reeling from the impact of UK government sanctions imposed on their Russian billionaire owner Roman Abramovich, the London club appeared rattled as they fell behind in northern France to a first-half Burak Yilmaz penalty.

Lille had given themselves a chance of salvaging the tie following their 2-0 defeat in the first leg at Stamford Bridge last month, but Christian Pulisic equalised on the night in first-half stoppage time and captain Azpilicueta got the winner in the 71st minute.

The reigning Ligue 1 champions go out, and following Paris Saint-Germain's stunning exit last week it means there will be no French club in Friday's draw for the Champions League quarter-finals.

In contrast, defending European champions Chelsea make it three Premier League clubs in the hat as they join Liverpool and Manchester City in the last eight.

Coach Thomas Tuchel had insisted there could be no excuses for his team despite the Blues being left in turmoil after Abramovich's assets were frozen, with Chelsea only being allowed to continue operating by the British government under a special licence.

They have been banned from selling tickets and were told they could not spend more than £20,000 ($26,300) per match on travel costs, throwing their plans for this trip across the English Channel into some disarray.

Before kick-off on Wednesday it emerged that the Ricketts family, owners of Major League Baseball team the Chicago Cubs, were leading a consortium looking to buy the club while British athletics great Sebastian Coe announced his involvement in a rival bid.

On the pitch Lille looked determined to add to Chelsea's woes as they started at an excellent tempo and Yilmaz twice came close in the early stages.

The visitors lost Danish defender Andreas Christensen to injury just after the half-hour mark, and his replacement, Trevoh Chalobah, was booked for pulling down Jonathan David within seconds of coming on.

Lille then won a penalty in the 38th minute when Italian referee Davide Massa was alerted by the VAR to a handball in the box by Jorginho.

He pointed to the spot after reviewing the images, and veteran Turkish striker Yilmaz made no mistake.

Yet the home side, crucially, could not hold their lead until the break.

In the third added minute Jorginho slid a terrific pass into the path of Pulisic in the box, and the United States international found the far corner.

That took the sting out of the game and Lille's remaining hopes of a comeback were ended when they lost two of their defenders, Zeki Celik and Sven Botman, to injury just before the hour mark.

Xeka rattled the post with a header from a Yilmaz cross in the 63rd minute but just like their only previous last-16 appearance –- a defeat against Manchester United in 2007 -– Lille found English opposition to be too strong.

Chelsea sealed the win on the night when substitute Mason Mount's cross from the left was turned in by the knee of Azpilicueta at the back post, and the skipper ran across to celebrate with the travelling support high in the far corner of the Stade Pierre-Mauroy.