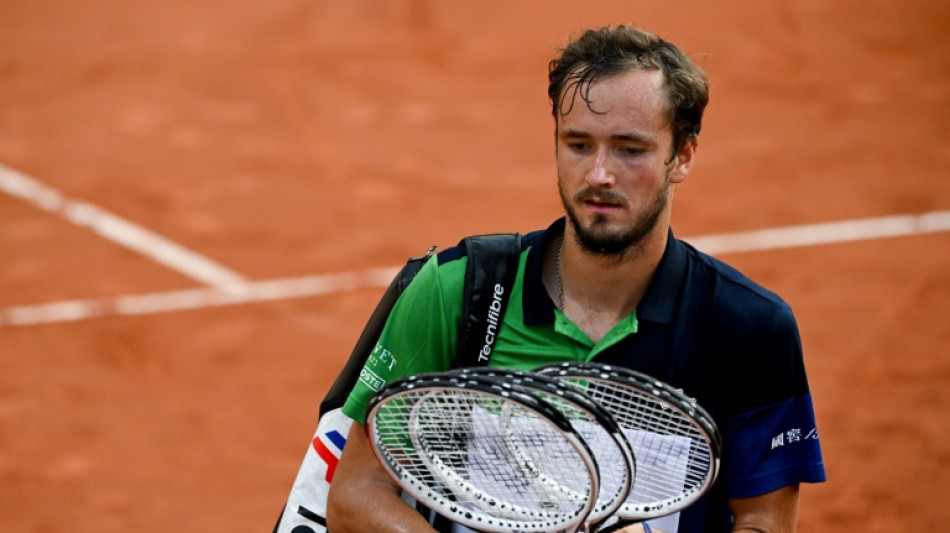 Medvedev rules himself out for French Open crown after comback loss / Foto: © AFP

Medvedev rules himself out for French Open crown after comback loss

World number two Daniil Medvedev on Tuesday ruled himself out as a title contender at next week's French Open after losing his first match back after a hernia operation.

The US Open champion, who underwent surgery last month, was beaten 6-2, 7-6 (7/5) by French veteran Richard Gasquet in the Geneva Open round of 16.

Medvedev said it was hard to look beyond Rafael Nadal and Novak Djokovic as favourites to win the second Grand Slam of the year and said he would work further on sharpening up his game in the remaining days before Paris.

"I don't play my best tennis on clay courts. I know that I'm capable of making some good results, as I did in the past. But for this I kind of need to be in the zone," Medvedev told reporters.

"I don't feel as confident on clay as on other surfaces, that's why I lost 7/5 in the tie-break finishing with a double fault. It's disappointing but I've had tougher losses in my career.

"Physically I felt not bad. With more days of practice I should be ready for Roland Garros."

"I haven't played for a month and a half, two months. I'm going to try to work both physically and tennis-wise and hopefully I can find the game I had there last year -- which is not going to be easy," he said.

Medvedev went under the knife after losing in the quarter-finals in Miami, meaning the Geneva loss was his only clay-court match ahead of Paris.

"Clay for my body is the most dangerous surface. For me it's clay courts -- every time, every year I have some problems where I cannot be 100 percent," he said.

"I'm not a favourite for Roland-Garros but I do want to play well. If I can find my level again, I can be dangerous."

It was the first time 35-year-old Gasquet had defeated a top two player since beating Roger Federer in 2005 -- his only other victory over a top-two opponent in 38 attempts.

"It's a great victory for me and it's incredible for me to win against Daniil, even if he's coming back from injuries," Gasquet said.

"It's a great moment and that's why I still continue to play and try to do well."

The former world number seven, who underwent hernia surgery himself in 2019, was surprised by the speed of Medvedev's comeback.

"The first match after surgery it's always difficult, so I knew it was tough for him but I know how good he is," he said.

"He has come back quickly because two months off is not a lot after an operation. It's impressive. It will take time for him to get back to his best."

The world number 75 faces Poland's Kamil Majchrzak in the quarter-finals on Thursday.