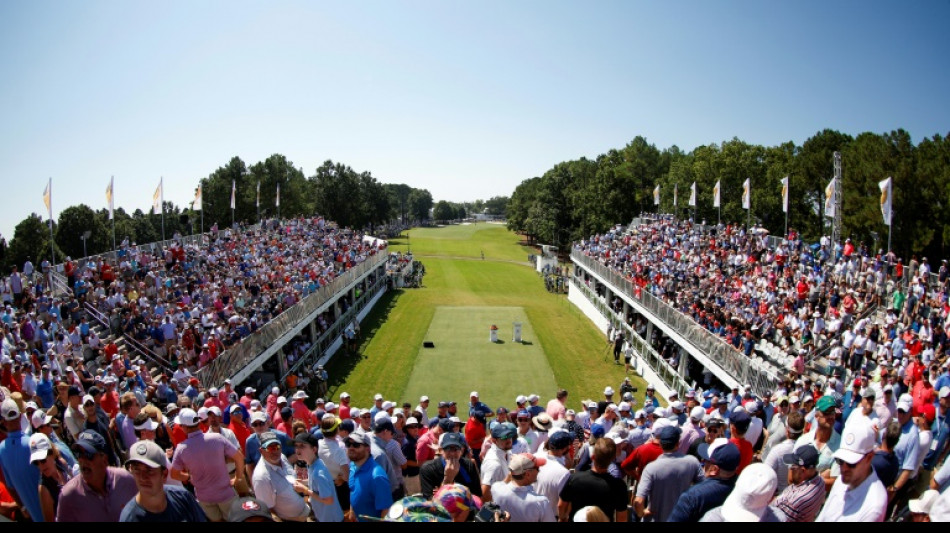 Masters winners Hideki Matsuyama of Japan and Adam Scott of Australia opened against US stars Xander Schauffele and Patrick Cantlay as the 14th Presidents Cup teed off Thursday at Quail Hollow.

Thousands of screaming fans packed the horseshoe-shaped stands around the first tee, providing an electric atmosphere to launch five foursomes (alternate shot) matches that began the team showdown between the United States and Internationals.

The Americans lead the all-time rivalry 11-1-1 with eight consecutive triumphs and have never lost on home soil.

The hosts are massive favorites thanks to a lineup with 10 of the world's 16 top-ranked players compared to none for their global rivals.

"If you look at each individual on our team, everyone has had to overcome something or used these team events as a springboard into becoming something," Tokyo Olympic champion Schauffele said.

"We have a really hungry team. It's definitely a special one to be on."

The Internationals, who lost several top players that jumped from the PGA Tour to the LIV Golf Series and thus became ineligible, have adopted a "nothing to lose" attitude.

The non-European squad has a record eight rookies on its youngest-ever roster.

"At the same time, we all really want to win this thing. We all feel that all of us playing well, there's more than a chance to get that done."

The Internationals put their most experienced players, Scott and Matsuyama, out first against fifth-ranked Schauffele and fourth-ranked Cantlay, last year's PGA playoff winner.

Together, the Americans won the PGA pairs event in April at New Orleans and are unbeaten in Ryder and Presidents Cup foursomes.

Scott made a record 10th start for the Internationals still searching for his first victory after eight losses and a draw.

"It's not very fun to lose these things and he has done it nine times," Internationals assistant coach Geoff Ogilvy said. "It's brutal. You're just compounding sort of frustration.

"It's like he wants to win it for everybody who never got a chance to win one. He wants this really bad."

Friday features five fourball (best ball) matches with four matches of each format on Saturday and 12 final singles matches on Sunday with 15.5 points needed to claim the Cup.

Quail Hollow's course route has been altered to have the "Green Mile", its famed closing holes, play as holes 13-15 this week, ensuring they will play key roles in more matches.