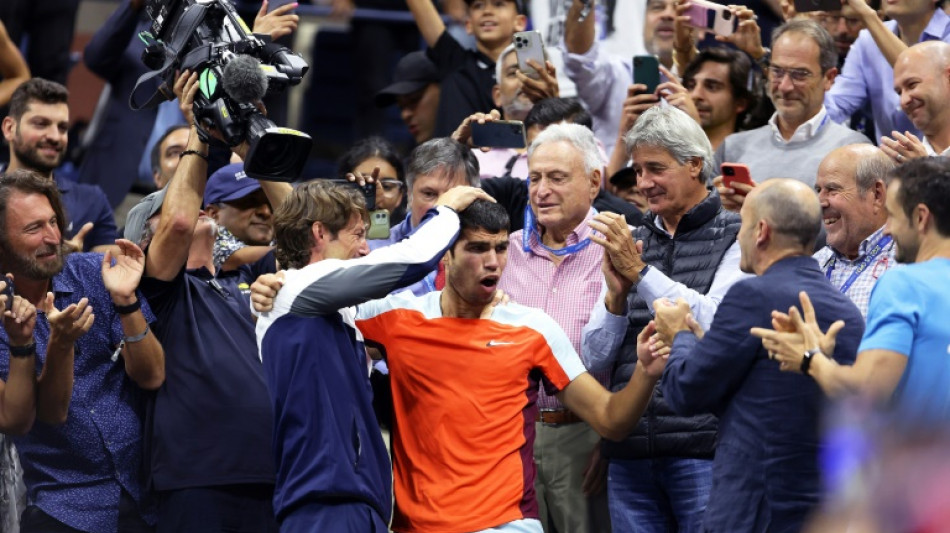 Carlos Alcaraz said ending the year as the youngest ever tennis world number one was "an amazing achievement" and a reward for his hard work.

Alcaraz was assured of ending as number one on Tuesday when Casper Ruud overcame Taylor Fritz, which ensured Rafael Nadal could not reach the last four at the ATP Finals in Turin. The older Spaniard needed to win the tournament to finish the season number one.

Alcaraz started the year at 32 in the world and made the biggest rise to finish top in 50 years of the rankings. He was unable to play in Turin due to an abdominal injury.

He becomes the first player outside of the Big Four of Novak Djokovic, Roger Federer, Andy Murray and Rafael Nadal to top the final rankings since Andy Roddick in 2003.

"It means a lot to me. I mean, to get this trophy, the world No. 1, to be part of tennis history along with a lot of legends, for me is an amazing feeling," Alcaraz told a press conference on Wednesday.

"It's an amazing achievement. I mean, all the hard work pays off.

"Yeah, for me it's incredible to lift this trophy today."

Ending the year as the youngest ever number one is just the latest landmark for the modest, muscular star from the small Murcian town of El Palmar.

Alcaraz learned the game at a tennis school run by his father.

Alcaraz hit the giant-killing jackpot at Madrid in May when he became the only man to beat both Nadal and Djokovic at the same clay-court event.

When he broke into the world top five in July, he was the youngest man to do so since 2005.

His coach former world number one Juan Carlos Ferrero believes that if Alcaraz stays fit, he is capable of winning 30 Grand Slam titles. Nadal holds the record at 22.

Despite the frustration of being unable to play this week, Alcaraz said he has been encouraged by the speed with which his injury is healing.

"It is going really well," he said.

"It is going really fast, as well.

"I could say in a week we improve a lot in the injury.

Alcaraz said he will, after the holidays, dispense with any lead-up tournaments and go straight to the Australian Open which begins on January 16 in Melbourne.

Alcaraz reached the third round in this year's edition

"After the holidays, I am focused on the pre-season, I'm focused on improving, starting the Australian Open as best I can.

"I don't know how the injury is going to go. But I could say I go directly to Australian Open."