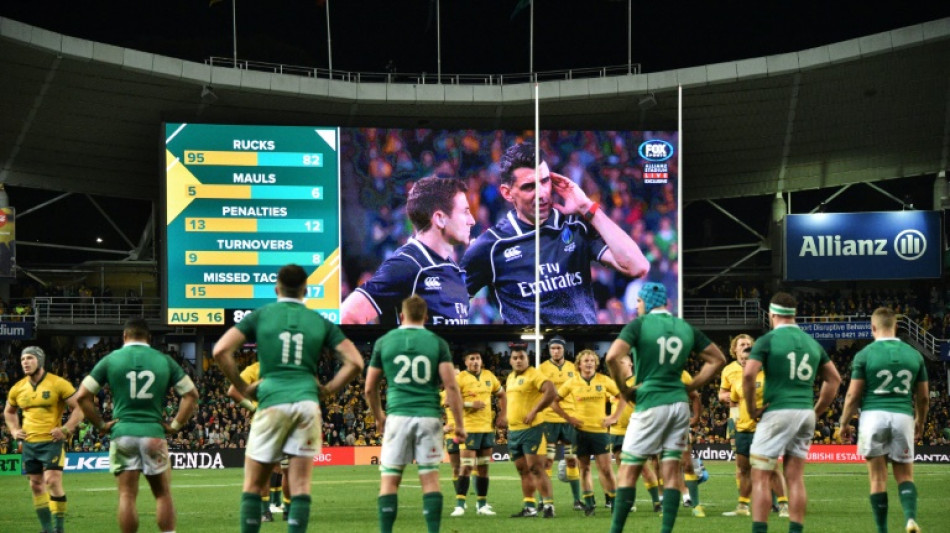 Ireland host Australia in their final international of the year bidding for a record-equalling 12th successive home Test success on Saturday and frank their status as the top-ranked rugby team in the world.

They will fancy their chances of matching that against an Australian side smarting from a historic defeat by Italy last weekend -- albeit a much changed Wallabies starting XV from that game.

AFP Sport picks out three key things ahead of the clash:

Ireland head coach Andy Farrell will be mighty relieved the team's talisman Johnny Sexton says he is fit after recovering from a dead leg he suffered in the 19-16 win over world champions South Africa earlier this month.

He may be 37 but Sexton remains crucial to Irish hopes of both Six Nations and World Cup success. Had he not been fit, and with deputy Joey Carbery concussed, Farrell would have had a major headache for the Wallabies match.

Such has been Sexton's form in 2022 that he has been nominated for World Player of the Year -- an accolade he won in 2018.

However, as is always the case with the hard taskmaster -- and he is his own fiercest critic -- he views winning Saturday's match as being more significant.

"It's not something you go searching for but to be recognised in that area is very special," he said.

"I would prefer a win and to play well on Saturday than win that, because ultimately at the end of the day it's opinion."

Mack Hansen may still be learning the Irish national anthem but the Australia-born wing has quickly established himself as a key component of Andy Farrell's side.

The 24-year-old -- whose Irish-born mother Diana moved with her parents to Australia when she was seven -- makes his third successive start in the Autumn Nations Series having scored tries against both South Africa and Fiji.

Hard to miss on the pitch -- his long flowing locks emerging from a scrum cap -- his eye-catching performances in the Six Nations and the historic 2-1 series win in New Zealand earned him a nomination for world breakthrough player of the year earlier this week.

Hardly surprising that the Connacht star -- who played five times for Australia Under 20s -- has no regrets over opting to commit himself to Ireland.

"I guess you could think what would have been with anything, so no, the decision to play for Ireland has been the best decision of my career and my life," he said earlier this week.

"I'm loving it over here and enjoying it."

Hansen's mother still has family living in County Cork and he says a couple of them will be in the stands -- though best perhaps if they don't watch his lips during the anthem.

"I'm still trying to learn the Irish one. If the camera can get to me at the start, I sing from the start and then just kind of fade away at the end," he said.

- Rennie hopes to digest a win -

Australia coach Dave Rennie is a man under pressure, with many, like former Wallaby star Stirling Mortlock, already dismissing their chances of winning next year's World Cup.

With a record of just four wins in 12 Tests this year a head coach's position would be at risk.

However, with less than a year to go until the World Cup, the Australian rugby bosses probably feel they have to stick with the 58-year-old New Zealander.

Rennie -- who replaced Michael Cheika in the hot seat after the 2019 World Cup -- could quieten the rumblings about him with a win against Ireland.

With the likes of the experienced Bernard Foley and Nic White returning at fly-half and scrum-half respectively, Rennie will be expecting a far better showing against the world's number one ranked side.

"I know we've got a very determined squad, we want to make a statement this weekend," said Rennie.