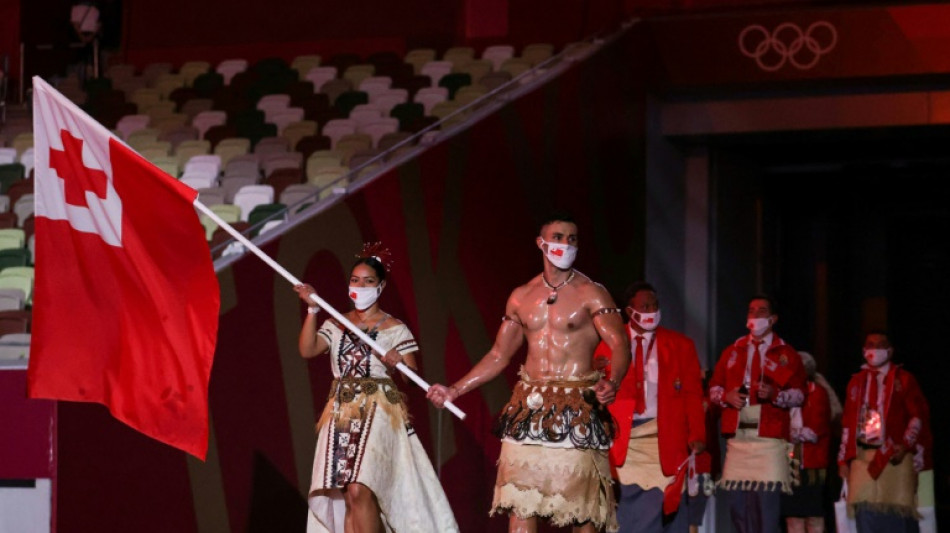 Tongan Olympic flagbearer Pita Taufatofua -- who made global headlines for going bare-chested at the Games -- is praying for news of his father after failing to hear from him following a devastating tsunami.

The Pacific island nation suffered widespread damage after a huge underwater volcanic eruption and tsunami on the weekend.

Speaking to AFP from Brisbane, Australia, the athlete said his father had travelled to Tonga’s main island, Tongatapu, a few days before the Hunga Tonga-Hunga Ha’Apai volcano erupted.

"He had just been made governor of Ha'Apai so he had to return to Tongatapu for the opening of parliament," said Taufatofua, who first captured world attention when the Rio Games opened in 2016, where he appeared topless and glistening with body oil while waving the Tongan flag.

The Olympian said a huge ash cloud from the volcano prevented his father's return to Ha'Apai and that he was securing the family's waterfront home on Tongatapu when the tsunami hit.

"I'm hoping and praying that my father is doing well," said Taufatofua, who competed in taekwondo in Rio and also represented his nation at the 2018 Winter Games, and Tokyo 2020.

Communication from Tonga has been crippled since the island nation's undersea cable was damaged during the disaster.

The first details of the impact on the ground have come from surveillance flights that were conducted by the Australian and New Zealand governments on Monday.

"They've shown pictures of the green before and then the pictures now are black of these green islands," Taufatofua said.

Once communications reopen, a volunteer team on the ground will conduct a needs assessment to determine where the funds are most urgently required.

At the moment, Taufatofua's focus is repairing any damage to vital infrastructure, including Tonga's two main hospitals and schools.

"If the footage that we saw is anything to go by then we're thinking damage will be in the tens to hundreds of millions of dollars in terms of infrastructure," he said.

Separate to his GoFundMe campaign, Taufatofua is also a Pacific ambassador for UNICEF and spent Tuesday packing aid supplies for Tonga.

The UNICEF supplies, including sanitation, wash and water kits, were scheduled to travel to Tonga on the HMAS Adelaide, which is expected to depart Brisbane on Wednesday morning.

It has been an anxious wait for many Tongans living in Australia, New Zealand and elsewhere since the tsunami struck.

"There are probably equal amounts of Tongans overseas as in Tonga. Maybe even a bit more. So there are a lot of people who are going through a stressful time at the moment," Taufatofua said.

The athlete said his thoughts were with those on the island.

"I just want them to know that while everything was tough for them – while the ashes were falling – we were here working hard, getting the awareness out, standing with them.

"They were not standing alone."