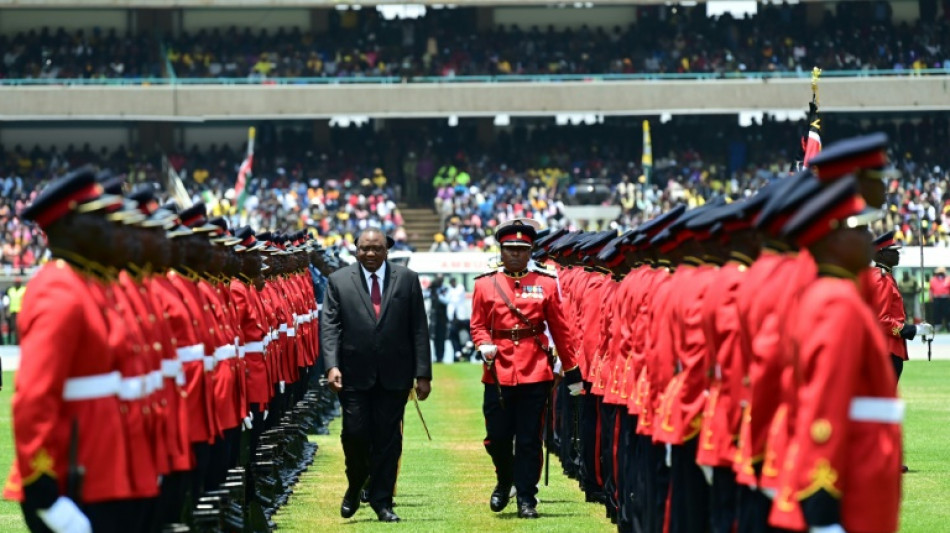 Ruto sworn in as Kenya's president after divisive poll

William Ruto was sworn in as Kenya's fifth post-independence president at a pomp-filled ceremony on Tuesday, after his narrow victory in a bitterly-fought but largely peaceful election.

Tens of thousands of people joined regional heads of state at a packed stadium in Nairobi to watch him take the oath of office, with many spectators clad in the bright yellow of Ruto's party, cheering and waving Kenyan flags.

"I William Samoei Ruto, in full realisation of the high calling I assume as president of Kenya, do swear that I will be faithful and bear true allegiance to the public of Kenya, that I will obey, preserve and protect this constitution of Kenya," he said.

Several people were injured earlier as crowds tried to force their way into the site. Television footage showed dozens of people falling on top of each other in a crush at one entrance gate.

Police urged Kenyans to watch proceedings from home after the 60,000-seat stadium was filled before sunrise.

"Dawn of Ruto era," trumpeted the frontpage headline in The Standard newspaper, while the Star said: "Time for Ruto."

A notoriously ambitious politician who has been deputy president since 2013, Ruto beat his rival Raila Odinga -- who had been backed by outgoing president Uhuru Kenyatta -- by less than two percentage points in the August 9 poll.

The 55-year-old rags-to-riches businessman, who once sold chickens on the roadside, now faces a daunting task to steer a polarised country gripped by a cost-of-living crisis and punishing drought.

His rise to State House has been closely watched by the international community, which looks to Kenya as a reliable and stable democracy in a turbulent region.

Foreign allies and independent observers praised the conduct of the vote, which was largely peaceful and free of the violence that has marred past elections in the country of 50 million people.

Ruto won by only around 200,000 votes out of 14 million but the Supreme Court on September 5 upheld his victory, dismissing his opponents' claims of fraud and mismanagement.

Outgoing head of state Kenyatta, who in a stunning turn of events had backed his longtime arch-rival Odinga in the election race, has promised a smooth transfer of power.

Kenyatta finally shook hands with Ruto at a meeting at the presidential residence on Monday after pointedly failing to publicly congratulate his deputy for several weeks.

Ruto has struck a conciliatory tone, extending a "hand of brotherhood" to his rivals and their supporters.

"We are not enemies. We are Kenyans," Ruto said after the court's decision.

But Odinga turned down an invitation to attend Tuesday's ceremony and instead travelled outside the country, charging in a statement that the election body did not conduct a "free and fair" poll.

Observers say Ruto faces a tough assignment building goodwill after a divisive and expensive political campaign that lasted well over a year and was peppered with acrimony and personal slander.

"This is the time to close ranks, embrace opponents and help forge a united front devoid of cheap political competition," The Standard wrote in an editorial.

Many ordinary Kenyans had stayed away from the ballot box, with disillusionment and economic hardship blamed for the low turnout.

The East African political and economic powerhouse is reeling from a once-in-a-generation drought, inflation is at five-year highs and unemployment is a major problem particularly among the youth.

Ruto said Sunday that Kenya was "in a deep economic hole" and repeated his pledge to lower the cost of living as a priority.

From humble beginnings, the multi-millionaire cast himself as "hustler in chief", a champion for the downtrodden during his campaign.

Among his ambitious promises was the creation of a 50-billion shilling ($415 million) "hustler fund" to provide loans to small businesses, and a commitment to bring down prices for fuel, grain and fertiliser.

Ruto's inauguration marks the end of Kenyatta's near decade in power, and one of the rare occasions his powerful family has not been at the apex of Kenyan politics.

Ruto himself will get a salary of about $144,000 a year as well as all the trappings of presidential office.